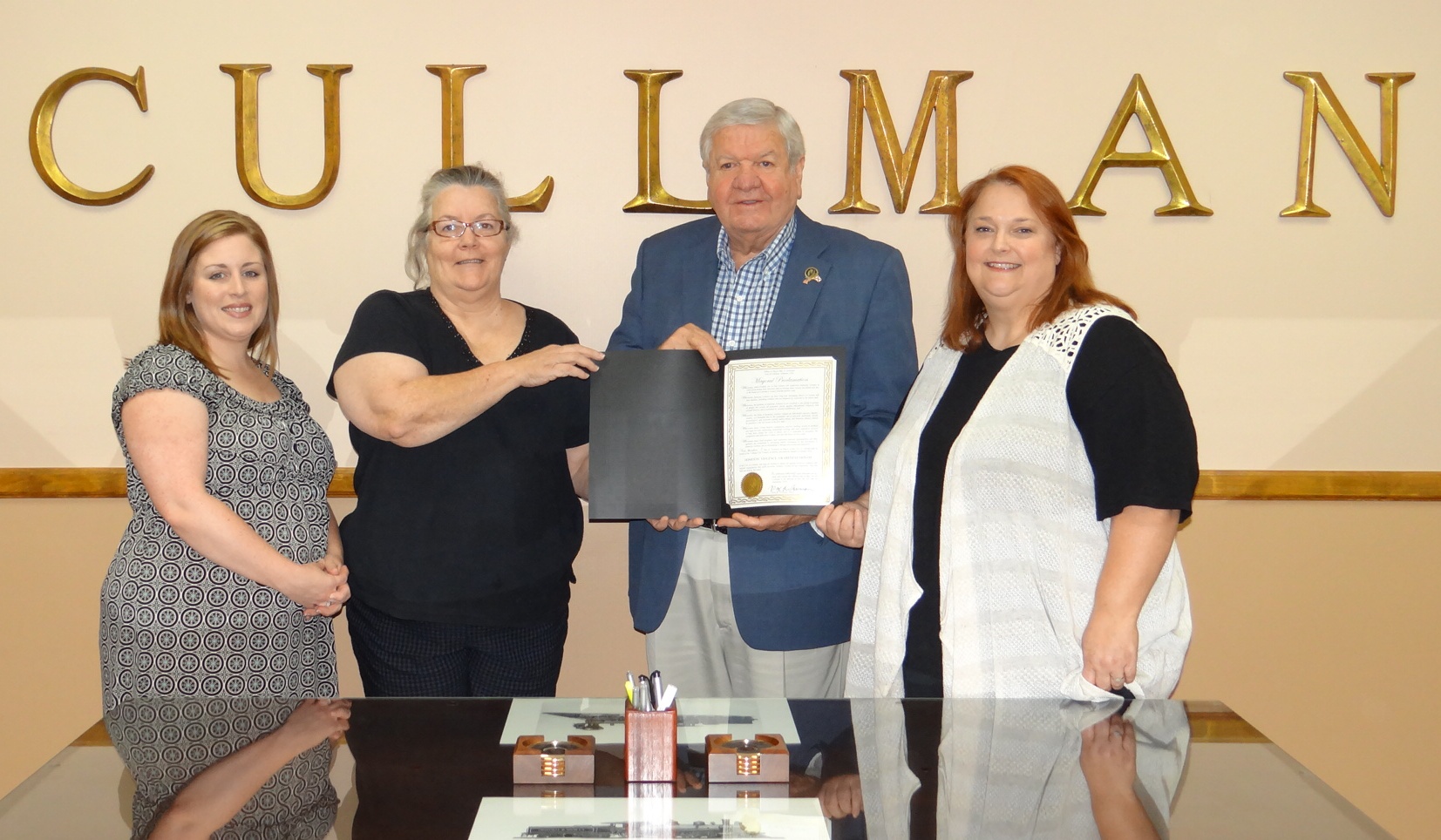 CULLMAN – On Monday, September 26, 2016, Cullman Mayor Max A. Townson proclaimed the month of October 2016 “Domestic Violence Awareness Month” in the city of Cullman.

According to statistics provided by Victim Services of Cullman, one in four women will experience domestic violence at some point during their lifetimes, and, on average, three women are killed each day at the hands of a current or former intimate partner. The damaging effects of domestic violence are long-term and affect the victims’ families, as well. Children are among the most vulnerable. They are negatively impacted even if they don’t actually witness the abuse, because they can sense the tension in the household and see the aftermath of the abuse. Tragically, experiencing this type of abuse as children often leads to the development of emotional, cognitive or behavioral problems.

“Domestic violence is terrible, and there's no excuse for it,” said Townson. “The City of Cullman values the safety of all of our citizens, and we want everyone to feel safe, secure and loved in our community.”

The problem of domestic violence is not confined to any group or groups of people. It crosses all economic, racial, gender, educational, religious and societal barriers, and is sustained by societal indifference or ignorance. Victims of domestic violence have their privacy, dignity, security and humanity violated. Whether the domestic violence manifests itself as physical, emotional, sexual, psychological or economic abuse or control, the effects are detrimental to our entire community.

“Victim Services of Cullman and other service organizations are dedicated to helping victims of domestic violence,” added Townson. “They work to increase awareness and to help all of us learn to recognize the signs of domestic violence so we can work together to eliminate its devastating effects in our community.”

On hand to accept the official proclamation at the mayor’s office were Donna Jacobs, Erin Dover and Carol Horstman of Victim Services of Cullman.

Victim Services of Cullman (VSOC, Inc.) is a nonprofit organization offering a host of services for victims of domestic violence and sexual assault. Their mission is to break the cycle of family violence and sexual assault. They work to accomplish this mission through their various services. For more information on VSOC, Inc., visit their web site at www.vsoccullman.org or call their administrative office at 256-775-2600.

VSOC, Inc., also has a 24-hour Crisis Line (256-734-6100) for those who are experiencing domestic violence or abuse, or those who have been victims of sexual assault.