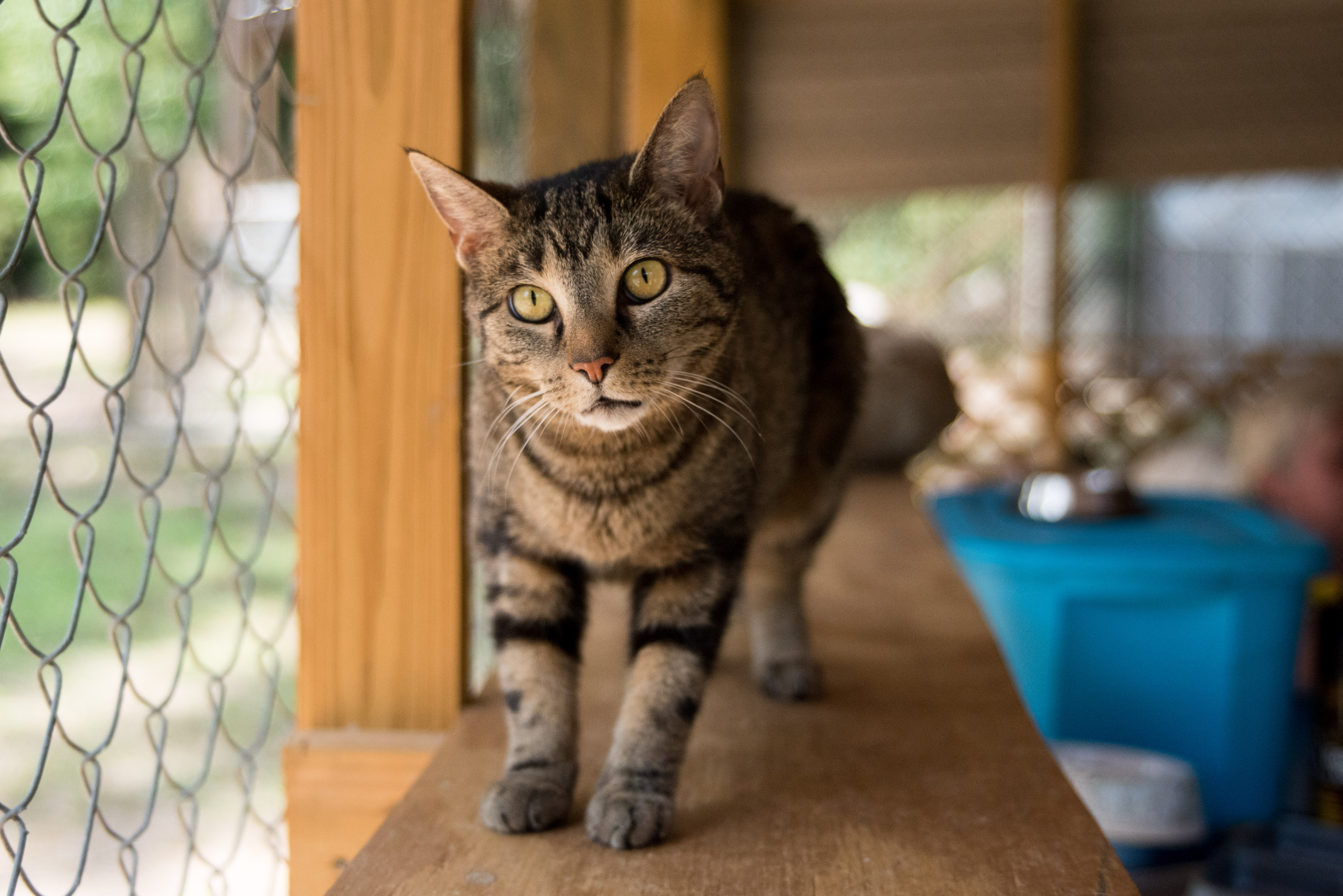 Photo: Gracie is one of about 15 cats at 2nd Chance Animal Sanctuary.

BLOUNT COUNTY – As the sun beats down on Sandra Shaffer's 16-acre spread at 2nd Chance Animal Sanctuary on June 16, Ringo, George and the rest of their band find solace from the stifling heat inside a structure built specifically for them.

The cat facility, dubbed "cattery," houses nearly 15 cats awaiting adoption at the sanctuary. An enclosed room with furniture and fans adjoins a patio area called a "catio," creating a secure, versatile environment for the animals.

"It gives cats indoor and outdoor options like the others," Shaffer said of the facility, which resembles a children's playhouse with a screened porch on the front.

The facility, as it stands today, is the product of a series of generous donations from donors who realized the ongoing needs at the sanctuary exceeded the financial capabilities of Shaffer, the sanctuary's founder.

Since 2006, Shaffer has almost single-handedly operated 2nd Chance, a no-kill, non-profit sanctuary that harbors animals until they are adopted or until they have reached the end of their natural lives.

Shaffer relocated the sanctuary to its current property in rural Blount County in 2010, starting an ongoing process to establish and maintain the best conditions possible for all animals living on the property, including dogs, horses, donkeys, ducks and more.

Most of Shaffer's cats are about 7 or 8 years old and are available for adoption.

Shaffer accepts abandoned or rescued animals, regardless of health, age or other factors that might preclude them from entering a standard animal shelter. No animals at 2nd Chance are euthanized for lack of adoption or overcrowding.

She has housed as many as 19 cats at one time, in addition to more than 40 dogs, five horses, 20-30 ducks and countless other animals she cares for every day with minimal help.

"If something happens to me, there's no one to take care of them," Shaffer said, as she looks around the cattery, spotting Delilah, Motormouth, Pandora and several of their friends nestled in different spots.

The same donors that funded the cat facility improvements also enabled Shaffer to install electricity and water lines nearby.

Shaffer said she tried to model the catio after those designed by Jackson Galaxy, cat behaviorist and host of Animal Planet's "My Cat from Hell" television show.

But without steady donations, Shaffer is left shouldering the majority of the sanctuary's bills, many of which are hefty and hard to estimate, depending on the need.

Shaffer said Alabama needs spay and neuter laws, and said no animal leaves her sanctuary before being spayed or neutered.

"It's the only way we're ever going to turn the tide on euthanasia," she said.

According to Shaffer's brochure for 2nd Chance, "an unaltered female cat and her offspring can produce 420,000 cats in just seven years if they all survive and go on to breed. An unaltered dog can create 67,000 puppies in just six years. Spaying and neutering is inexpensive and helps to prevent cancer of the reproductive organs. It also helps to prevent animals from roaming where they may be injured or killed."

"If just everybody did a little bit, there wouldn't be so much for people like me to do," Shaffer said.

Her primary goal is to find forever homes for all of her adoptable cats and dogs.

"I would like to have my numbers down to 20 to 30 dogs and a few cats, but cats are so numerous and live awhile," Shaffer said.

But Shaffer's numbers can change drastically without warning. In 2010, Shaffer took in more than 30 animals from one rescue. Some of the animals still live at the sanctuary.

With every new furry face comes a series of expenses for food, veterinary care and facility upkeep. All things considered, the cost to operate the sanctuary totals $40,000 to $50,000 per year.

Donations will ensure Shaffer can continue her work and establish the sanctuary as a perpetual haven for animals in need of a temporary or permanent home.

All donations to the sanctuary are tax-deductible. Checks can be made to 2nd Chance Animal Sanctuary, P.O. Box 193, Hayden, AL 35079.

Donations also can be made via PayPal at sshaffer01@bellsouth.net.

For more information about the sanctuary, email Sandra Shaffer at sshaffer01@bellsouth.net.