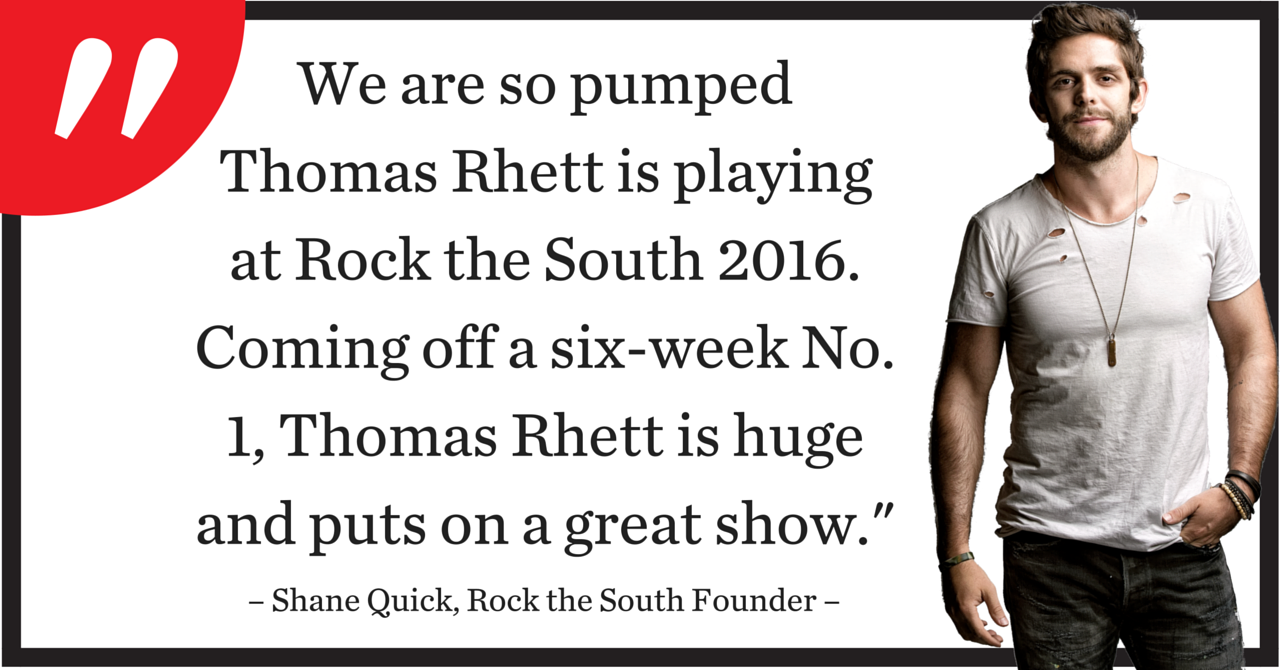 Rock the South continues to be less than half the price of any other country music festival in the Southeast. For 24 hours starting Feb. 4 at 10 a.m., fans can buy tickets at last year’s prices.At 10 a.m. on Feb. 5, Early Bird Pricing will begin and last until March 31.

Years before he kicked off his career with “It Goes Like This,” a debut album that spawned five Top 40 hits and three number ones, Thomas Rhett spent his childhood listening to the sounds of FM radio. "Growing up, there was no such thing as listening to one radio station," he remembers. Instead, Rhett would regularly flip from one station to another, cranking up a mix of country, pop, R&B, rap, rock and oldies. It was a tangle of music.

Decades later, he's tipping his hat to those days with “Tangled Up,” an album that mixes the sound of his influences with equal doses of groove, melody and twang. Although recorded in his hometown of Nashville, “Tangled Up” was written all over America, during a year-long tour in support of Thomas' first album. There was something about the highway that made him feel creative. Something about the crowds that made him feel inspired. Something about the sold-out shows that made him want to return to the tour bus and write something exciting. With help from a handful of co-writers, Thomas whipped up a new batch of songs during the hours before sound check, after the encore and during the long rides from one city to the next. Maybe that's why “Tangled Up” feels like such an upbeat, energetic record. It was created while Thomas' body was still flush with adrenaline.

"At our shows, there aren't any rules," he said. "There's no such thing as standing still and just singing a song. I love jumping into the crowd. I love to dance. The whole show is very up-tempo, high-energy and completely unpredictable."

You could say the same about “Tangled Up.” Produced by Dan Huff and Jesse Frasure, the album is filled with party anthems, dance tunes, drinking songs, love ballads and everything in between, all tied together by a dynamic singer who's unafraid to blur the lines between genres. Some songs take their influence from country stars like Eric Church. Others are more reminiscent of pop idols like Justin Timberlake or Bruno Mars. None of the tracks sound alike, but they do all sound like Thomas Rhett songs.

They also sound like hit songs. "Crash and Burn," the album's first single, climbed into the Top 10 long before the album's release, and any number of the remaining tracks — from "South Side," a groove-heavy song co-written with Chris Stapleton, to "Die a Happy Man," a heartfelt tribute to Rhett's wife — could follow its climb up charts. Meanwhile, songs like "Single Girl" mix his country-boy croon with layers of poppy synthesizers, and "Tangled" models itself after Michael Jackson's dance floor jams.

"It's just so fun and so crazy," he said of the album, the deluxe version of which also features cameos by pop singer Jordin Sparks and hip-hop artist Lunch Money Lewis. "I think it kind of describes my life a bit. There's all these thoughts and all these melodies and all these different kind of songs on the record. It's all tangled up in knots, in a way. It's like this big ball of yarn that you can't ever fully get undone, and I love that. I love that there's so much variety on the album, so that's why we chose ‘Tangled Up’ as the name."