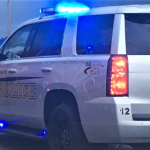 The Cullman Police Department shared that there was an incident on the train tracks next to Depot Park around noon today.

A 2009 Red Saturn Vue driven by a 51-year-old Cullman female admitted to officers that she stopped on the train tracks to commit suicide.

CPD Public Relations Officer Adam Clark said she did not have any injuries, the train was able to slow down in time, though the vehicle did sustain damage.

“She’s been probated from the scene to make sure she gets the help she needs,” Clark said.