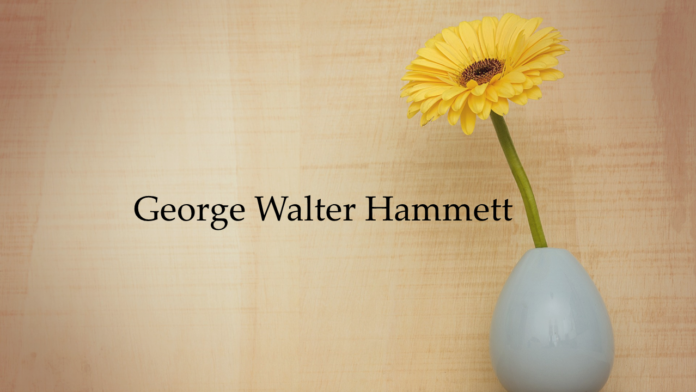 George Walter Hammett, 82, passed away August 29, 2021 after contracting pneumonia following hip surgery. George is survived by his wife of 57 years: Joan; his two daughters: Heather “Micki” Cobb (Wes) and Laura Cox (Michael); grandchildren: Megan, Weston and Kaitlyn and siblings Daisy Rickett and Dessella Jones. He is preceded in death by his parents and his brothers: Wilford G. and J. Wendel.

George was born in Hapeville, GA on July 22, 1939 to George Walter Hammett, Sr. and Henry Grady Gay Sikes. He attended high school in Hapeville where he played trumpet in the school band, played piano in the jazz club, sang in the glee club and ran track – barefooted! Additionally, he was on the newspaper staff and was in Junior Achievement – where he first met Joan. George graduated from Georgia Tech and was commissioned into the USAF where he was an air traffic controller and radar intercept controller. One of his more interesting jobs, George was an organoleptic evaluator (taste tester) for Coca-Cola in Atlanta.  During a career cut short by an overage of first lieutenants, George was stationed at Stewart AB, Goosebay-Labrodor, and Luke AFB. After accepting an early out from the USAF, George was a substitute teacher while Joan finished school at La Grange College. George and Joan then moved to New Martinsville, WV where he worked for Olin Aluminum, then to Dallas, TX where he worked for Redman Industries, then to Cullman where he worked for Winston Industries as the vice president of Manufacturing for 13 years. After helping Winston Industries close the plant, George purchased and operated The Rental Place until he retired in 2006.

George was an avid traveler and photographer. He has traveled most of Europe and had been to China, Japan, Canada, Mexico, United Arab Emirates, South America, Greenland, Monaco, Macau and most, if not all, 50 states.

George was nothing if not a dedicated family man and mentor to many. Saturdays were his days for yard work and teaching his daughters everything from gardening to automotive repair. His phase was always, “come here, I’ll let you help me” as he passed along nuggets of wisdom and lifelong learning on to his assistant. He was a soft-spoken mentor ready to provide advice and life lessons if one was interested or wrestling with a particularly difficult issue. Sundays were for church and family…and sleeping …sitting upright…with newspaper in hand.

George was also deeply involved within every community he lived but, no more so than to Cullman. He was a Lions’ Club member for 50 years and president of Community Concert. He played an active role in the Cullman County Fair and his church, Cullman First United Methodist. He was on multiple committees within both organizations.

In lieu of flowers, we ask donations be made to Cullman Lions Club, Grace Place at Grace Episcopal Church, Cullman Caring for Kids, Camp Sumatanga for scholarships or your favorite charity.