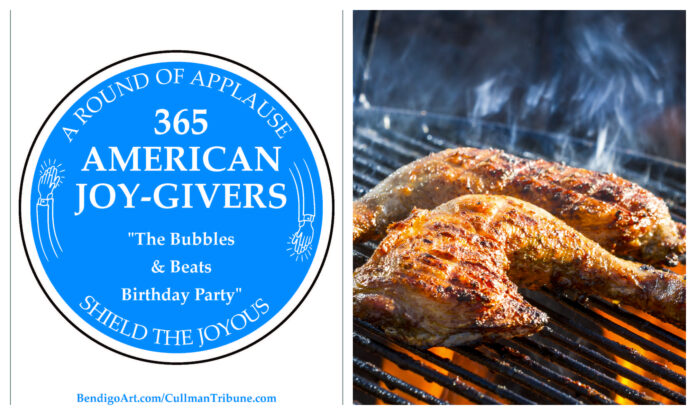 The party tent is a giant, transparent, “Lawrence Welk” bubble inflated over a lighted, chessboard-inspired dance floor. The air is fresh and fragrant with joy-giving, new plant varieties Luther Burbank has given the world. At one of the place settings is a portable court reporter’s typewriter on which Jack Kerouac creates an automatic poem as he transcribes the evening into words imagery.

The special entertainment is a fun and glamourous dance created by gorgeous, long-legged Cyd Charisse accompanied by her fellow Texan, Bob Wills. And, the dinner menu highlights an entrée of Cyd Charisse Exquisite, Spice-Rubbed Thighs, or for anyone reading this who feels that could be objectifying the limbs the dancer was proud to flaunt, you could think of the famous kick-boxing legs of Chuck Norris, also a celebrated guest at this party.

JOIN US…You sense the joy the minute you waltz into the party bubble. HOORAY FOR THE JOY-GIVERS! (Note: The comments attributed to these famous joy-givers come from words they have written or said.)

Please give A ROUND OF APPLAUSE for these American joy-givers celebrating a birthday this week:

March 6—BOB WILLS is widely known as “The King of Western Swing” for melding his virtuoso fiddle-playing with steel guitar, piano, banjo and bass to create a unique, American regional, internationally popular sound. The two biggest hits of Bob Wills and the Texas Playboys are “Faded Love” and “Ida Red Likes the Boogie.” He’s in the Country Music Hall of Fame, the Rock and Roll Hall of Fame, and deserves a Presidential Medal of Freedom for reviving the lost art of unabashedly joyous yodeling. Like his fellow Texan, Waylon Jennings, said, “When you’re down in Texas, Bob Wills is still the king.”

March 7—LUTHER BURBANK—Would you like American-cultivated, French fried potatoes with that party plate? Whether you’re eating McDonald’s or almost any French fries in the U.S., you are likely eating Burbank, russet skin potatoes. Not only did Burbank’s determined work produce a blight-resistant potato that kept thousands of Europeans and Americans from starving, this mostly self-educated botanist and horticulturist also gave us these joys: the Shasta daisy, the fire poppy, the “July Elberta” peach, the “Santa Rosa” plum, the “Flaming Gold” nectarine, the “Wickson” plum, the freestone peach and the white blackberry. His nursery in Santa Rosa, California is now a city park, the Luther Burbank Home and Gardens.

March 8—CYD CHARISSE was born Tula Ellice Finklea, but as they say, a well-loved star has many names; she also performed as Lily Norwood, Felia Siderova and Maria Istomina. The distinctive moniker, “Cyd,” came from her little brother trying to call her “Sis,” which was then given the Hollywood spelling pizzaz. She is most known as a beautiful, long-stemmed dancer in such films as “Singin’ in the Rain,” “The Bandwagon,” “Brigadoon” and “Silk Stockings.” This Texas rose began dancing lessons when she was 6 years old to recover strength lost to polio.

March 9—BOBBY FISCHER was a chess prodigy born to a homeless, single mother. At age 13, he won what was dubbed, “The Game of the Century.” At age 14, he became the youngest ever U.S. Chess Champion and at 15 he became the youngest grandmaster and the youngest candidate for the World Championship. In 1972, Fischer brought joy to millions of Americans, most of whom knew little about the mind game of chess, when he defeated Boris Spassky of the USSR in what was publicized as a major, Cold War confrontation between Russia and the USA.

March 10—CHUCK NORRIS, the martial artist, actor, film producer, screenwriter and author was born Carlos Ray Norris in Oklahoma. He starred in a streak of bankable, independently made action and martial arts movies including “A Force of One” and “An Eye for An Eye,” then later in studio films such as “Silent Rage,” “Missing in Action,” and “Delta Force I, II.” He played the title role of the long-running television series “Walker, Texas Ranger.” Norris has written two motivational books that made The New York Times best-seller lists. However, his greatest popularity may have been handed to him with outlandish internet memes known as “Chuck Norris Facts” which are “tall tale one-liners” others wrote about his super-human strength and endurance. Here are 10 particularly joy-giving favorites of those memes, which also made the performer giant, stadium-sized buckets of money from product sponsorships:

(For an endless, phenomenal, superior-to-all collection of these, try chucknorrisfacts.net.)

March 11—LAWRENCE WELK, the accordionist, bandleader and television impresario hosted the Saturday night “must-see tv” that gathered families together across the country for “The Lawrence Welk Show” from 1951 to 1982. His easy-listening style seen through a scrim of gray bubbles came to be known as “Champagne music.” Welk was born in the German-speaking town of Strausburg, North Dakota and did not speak English until he was 21 years old. Among the weekly stars of his show were The Lennon Sisters, Norma Zimmer “The Champagne Music Lady,” Myron Floren playing bouncy polka on accordion and the lively hammering of Jo Ann Castle, “The Queen of Honky Tonk Piano.”

COMMENTS OVERHEARD at “The Bubbles and Beats Birthday Party” for American joy-givers:

“If I had to give up acting or dancing, I’d choose to keep dancing.”—Cyd Charisse

“To be granted some kind of usable talent and to be able to use it to the fullest extent of which you are capable—this, to me, is a kind of joy that is almost unequaled.”—Lawrence Welk

“Since she learned to dance, her life is full of romance.”—Bob Wills

“Flowers always make people better, happier, and more helpful; they are sunshine, food and medicine for the soul.”—Luther Burbank

“Practice kindness all day to everybody and you will realize you’re already in Heaven.”—Jack Kerouac

“I don’t believe in psychology. I believe in good moves.”—Bobby Fischer

“If you like a tune that’s bound to drive away your cares, make happy your soul with that old steel guitar rag.”—Bob Wills

“A flower is an educated weed.”—Luther Burbank

“Rest and be kind, you don’t have to prove anything.”—Jack Kerouac

“I thought it would be fun to have a little fun. You know, talk and dance and—talk.”—Cyd Charisse

“Conversation didn’t seem necessary when I put the accordion down and swung some lady around the floor.”—Lawrence Welk

“And then she whispered, ‘Si, Senor, si,’ in a cabaret we dance the hours away. Her eyes told more than words could ever say.” –Bob Wills

“I’d rather be free in my mind, and be locked in a prison cell, than to be a coward and not be able to say what I want.”—Bobby Fischer

“The fact that everybody in the world dreams every night ties all mankind together.”—Jack Kerouac

(Regarding her dance partners Fred Astaire and Gene Kelly) “I’d say they were the two greatest dance personalities who were ever on a screen. But, it’s like comparing apples and oranges. They’re both delicious.”—Cyd Charisse

“She doesn’t one-step or two-step or do the minuet, but she does a better boogie dancin’ than anyone yet.”—Bob Wills

“Be in love with your life, every detail of it.”—Jack Kerouac

“The greatest happiness in the world is to make others happy.”—Luther Burbank

“Over and over, I marvel at the blessings of my life: Each year has grown better than the last.”—Lawrence Welk

When dinner was ready, Wills sang these words from his hit “Roly Poly:” “Roly Poly eatin’ corn and ‘taters, hungry every minute  of the day. Roly Poly gnawin’ on a biscuit as long as he can chew it, it’s okay.”

PARTY MENU for “The Bubbles and Beats Birthday Party:”

AND, ONE TO GROW ON—With all the curiosity we currently have about the origins of the food we eat and about genetic modification, the 2009 book, “THE GARDEN OF INVENTION: LUTHER BURBANK and the BUSINESS OF BREEDING PLANTS” by Jane S. Smith could be a delicious, pardon that, addition to your kitchen library. If anyone reading this knows the author/publisher, please nudge them to issue a new edition for us hungry readers.

At the end of the evening, before everyone enjoys dancing on the chessboard floor inside the glowing, translucent bubble, Welk recalls, “For a while we had trouble trying to get the sound of a champagne cork exploding out of the bottle. I solved the problem by sticking my finger inside my mouth and popping it out.”

Champagne is served and Kerouac toasts the gathering with these words—“The only people for me are the mad ones, the ones who are mad to live, made to talk, mad to be saved, desirous of everything at the same time, the ones who never yawn or say a commonplace thing, but burn, burn, burn like fabulous yellow roman candles exploding like spiders across the stars.”

This easy, exquisitely delicious dish is perfect for spring and summer grilling.