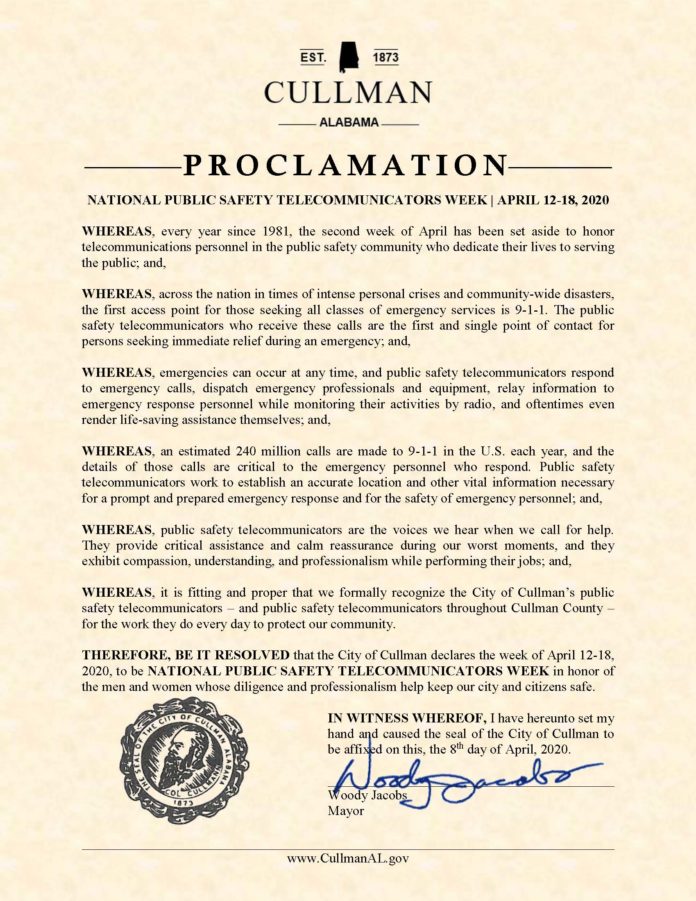 CULLMAN, Ala. – Cullman Mayor Woody Jacobs has proclaimed the second full week of April (April 12-18) as National Public Safety Telecommunicators Week. This week honors the thousands of men and women who respond to emergency calls, dispatch emergency professionals and equipment, and render life-saving assistance to our citizens.

“We appreciate our dispatchers and the work they do to make sure that our police and fire personnel can quickly respond to emergency situations,” said Jacobs.

Across the nation in times of intense personal crises and community-wide disasters, the first access point for those seeking all classes of emergency services is 9-1-1. The public safety telecommunicators who receive these calls are the first and single point of contact for persons seeking immediate relief during an emergency. They are the voices we hear when we call for help. They provide critical assistance and calm reassurance during our worst moments, and they exhibit compassion, understanding, and professionalism while performing their jobs.

Emergency response personnel also rely on public safety telecommunicators for their own safety. The safety of our police officers, firefighters, and other emergency personnel is dependent upon the quality and accuracy of information obtained from citizens who call 9-1-1 for help. Also, by monitoring their activities by radio and providing them with additional information as it is received, dispatchers further ensure the safety of emergency responders.

National Public Safety Telecommunicators Week, sponsored by the Association of Public-Safety Communications Officials (APCO) began in 1981. The story goes that Contra Costa County (California) Sheriff Richard Rainey decided to acknowledge his administrative staff by treating them all to lunch. So at 11am one day, the administration staff auto-forwarded all of their calls to dispatch, as was their normal procedure after business hours. But they failed to notify the dispatchers who were surprised when their call volume suddenly increased. Patricia Anderson, a long-time tenured dispatcher, complained about this to Sheriff Rainey. At about 2pm that same day, Sheriff Rainey and Under Sheriff Warren Rupf walked into dispatch with a giant beautifully-decorated cake that said “Happy Dispatcher Week.” And with that gesture, they started an initiative that eventually became what is now known as “National Public Safety Telecommunicators Week.”

“Public safety telecommunicators are vital in our city, county, state, and nation,” said the mayor. “We depend upon the professionalism and skill of our local emergency dispatchers to keep our community and our citizens safe, and I am proud to recognize them and the work they do by proclaiming April 12-18, 2020, ‘Public Safety Telecommunicators Week’ in Cullman.”