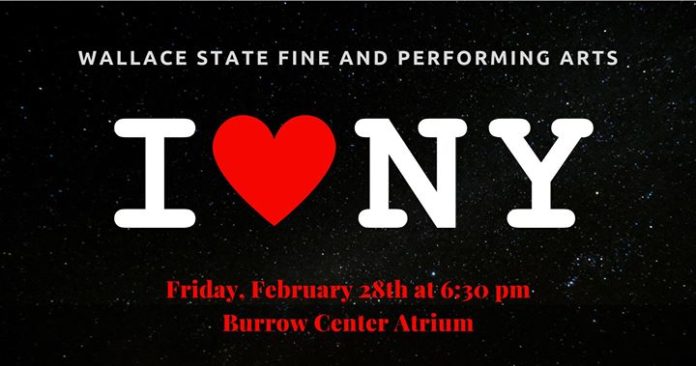 HANCEVILLE, Ala. – Whether you want to have a date night, a girls’ night out or a group outing with friends or coworkers, the upcoming “I Love NY” cabaret dinner show will fill the bill.

A Big Apple-themed three course dinner will be presented by the Wallace State Culinary Arts program. The meal begins with a Top of the Town Salad. The second course features Chicken Hash å la 21 Club, followed by New York Cheesecake Framboise for dessert.

The phrase Top of the Town has often referred the highest point in a city or town. In New York, the phrase was commonly used after the construction of the Empire State Building in 1931. The Top of the Town Salad will include a variety of specially grown organic lettuces, carefully layered to create a high point on the plate. The salad will be drizzled with an exceptional sherry vinegar and shallot dressing and topped with a rare surprise, seldom seen in winter.

Chicken Hash is an iconic dish that has been on the menu at the 21 Club since it debuted in 1930. This version begins with poached chicken breast delicately simmered in a savory chicken cream, gently perfumed with sherry wine and enriched with egg yolks. It will be served with a shitake rice pilaf and grilled asparagus spears.

The cheesecake, made with an authentic New York recipe, is heavy and dense as is the tradition for New York style cheesecakes. It will be paired with a raspberry coulis and fresh raspberries.

Entertainment will be provided by Performing Arts students, focusing on the popular music from the city that never sleeps

In addition to the dinner and show, participants will have the opportunity to purchase artwork from a student and Campus Celebrity Art Sale.

“This is a fundraiser for our theatre department’s New York trip in May,” said Lauren Cantrell Salerno, director of the Wallace State Theatre program. “While we’re in New York, they will get to attend a number of workshops, see several Broadway shows, including Hamilton, and get to experience what it’s like both on stage and behind the scenes for professional actors.”

The Wallace State Theatre program will also be presenting “Big Fish the Musical” this spring. The play based on Alabama native Daniel Wallace’s book will be staged March 12-15 in the Betty Leeth Haynes Theatre.

Other upcoming Fine and Performing Arts events include: