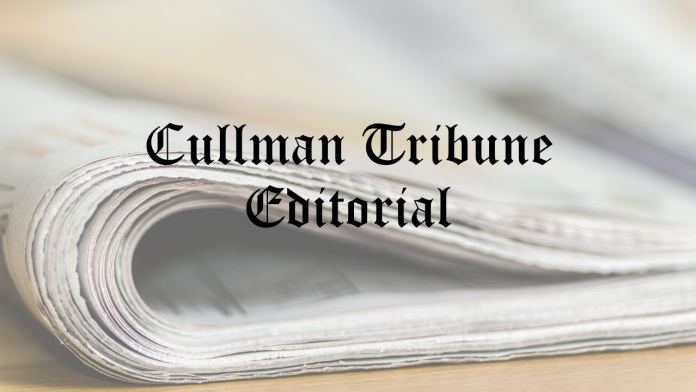 If you gonna write for us, I want you to write positive. Anytime the commission name is in an article, it’s all positive. No negatives.”
Cullman County Commission Chairman Kenneth Walker

“Congress shall make no law respecting an establishment of religion, or prohibiting the free exercise thereof; or abridging the freedom of speech, or of the press; or the right of the people peaceably to assemble, and to petition the government for a redress of grievances.”

Please feel free to refer back to the First Amendment up there as you sift through this editorial. While it’s no hidden fact that Cullman County Commission Chairman Kenneth Walker and I have not seen eye-to-eye in more than five years, it’s sad to say that I was not surprised by his actions toward two Tribune reporters Tuesday morning following the commission’s work session. Mr. Walker was upset with The Tribune’s coverage of the Garden City Town Council’s meeting on March 18, 2019. (https://bit.ly/2Ox3cSz)

Walker pulled both into his office and proceeded to question the merit of their work, which everyone is entitled to do; however, what followed was more in line with an early 20th century boss and not an elected official.

First, Mr. Walker, you don’t tell any reporter (true, qualified and credentialed media) what he or she should and shouldn’t report. Controversy, second-guessing and scrutiny are what you, and all elected officials, signed up for when you penned your name to run and paid the fee to register. If you didn’t know, media was established to keep checks and balances of elected officials, not to serve as your personal PR firm.

Second, our reporter factually reported on the meeting in question, the Garden City Town Council meeting (https://bit.ly/2Ox3cSz), in which Mayor Pro-Tempore Scott Arnold made remarks about alleged actions taken by the county commission; however, it is not her responsibility to call you or any of the commissioners for quotes every time a municipality or councilmember mentions your names or the commission. However, our editor did try to contact Commissioner Kerry Watson. Why Watson? Because it’s in his district.

A major line between media and government wasn’t merely overstepped when you, Chairman Walker, stated, “If you gonna write for us, I want you to write positive. Anytime the commission name is in an article, it’s all positive. No negatives. And, you hadn’t even called to ask us about it or nothing. You wrote what they wanted. You wrote what they said and didn’t back it up by calling the commission. I don’t like doing business like that.”

You didn’t just overstep, you took a sprinter’s dash and dove off the cliff of media suppression head first in an age where reporters/journalists/media outlets are being attacked daily by elected officials. Suppose you just wanted to be part of loud rhetoric.

We aren’t here to appease/tear down egos, make you look bad or good, make up quotes for you to sound intelligent/ignorant, or to do anything other than to report news as it unfolds.

If you feel media should operate differently, then my suggestion is to get out of politics.

Before anyone attempts to rip my head off, please feel free to read the full transcript (minus one small section which Walker asked to be off the record, as it pertained to a personnel issue) and listen to the full audio.

Decide for yourself if attempting to dictate what media should and shouldn’t report is behavior befitting a public official.

Our reporters were given the option to have their names withheld from this editorial but both insisted that they be named. It is a common practice for newspapers, television stations and other credentialed media to omit the names of reporters involved in incidents such as the one with Chairman Walker; however, our reporters and editorial crew all agreed complete transparency is the way to go.

A link to the story Chairman Walker is referencing is added at the bottom of this editorial.

MD- He just said it. He acknowledged I was there..

KW- (interrupting) Don’t, don’t write nothing unless you know the truth. We didn’t raise taxes to pave the roads for Rock the South. That’s what you wrote.

MD- Yes, he was griping about the school taxes, but he just said he heard it as rumors. Not that it was an actual fact.

MD- Well, I stated that he said it was a rumor in his direct quote.

KW- We gotta be positive in this community.

CP- I know last week-I don’t, I wasn’t at Garden City so I don’t know how it was said. Sometimes it’s hard…

KW- I already called and chewed him out because he didn’t know what he was talking about either.

CP- Well sometimes it’s hard to do what we do, too.

KW- Oh believe me, I know it was tough.

KW- Left you in limbo?

CP- But there was a lot of stuff being said that every two seconds I wanted to jump on there, like, “Y’all don’t understand.”

KW- I know, I totally understand.

CP- But it wasn’t my place to come out and make an announcement. That was Shane Barnette’s place.

CP-  And so there…phew! Trust me, I understand your frustration.

KW- And listen, I can work with anybody, I promise you. I work with you.

KW to MD- I don’t, I’ll work with you all you need me to, but negative information, we do not need our-especially with Rock the South and sales tax. I mean that’s something that’s never happened in the history of the commission. And I know she (CP) covers the commission, but if you’ve got an article with Garden City, please call and get our story.

KW- I’m not, I’m not, I’m not mad at you and I’m not getting on to you, but I’m trying to tell you that us as a commission don’t want negative things out. Cause I’ve tried, in the last six years, I’ve tried to keep everything positive and my motto is “Keeping Cullman County Moving Forward” that’s what we want to do and would love your help with it.

CP- So, well can you just go ahead and tell me, so I can put it out there, because I’ll be writing this meeting up. But I can clarify in my article based on what the Garden City guy said, who is paying for the roads? Improvements? Not y’all?

CP- What is happening? I don’t even know.

KW- There’s no improvements to any roads.

CP- OK, that’s all I need to know and I will let people…

KW- There’s no road improvements. All we done for Rock the South…

KW- All we done is approve Skipper and Associates’ traffic plan. That’s all we approved. We didn’t approve anything for Rock the South.

CP- OK, I will clarify that then.

KW- Here call me. Y’all got me cell phone number?

KW- Just don’t give it out.

CP- We’re going to put it in the paper.

KW- Yeah! You can call me anytime. I’ll work with you. I’m an easy person to get along with.

CP- I’ll just make sure, that was one of the things actually Wendy asked me yesterday to clarify was that taxpayer dollars were not going to have anything to do with the roads of Rock the South.

CP- That’s totally different. I said OK, I’ll ask him. So that works. There’s re-striping. I remember you thought there was re-striping. That’s the only part about that I remember was going to have to have improvements done to it and I was of the impression that Rock the South was (footing) the bill for that.

KW- Yeah for the striping of one county road. Let’s see if John (Lang) is still here. Get that road number. It’s not very far or very much.

MD- You recorded all that right?

MD- Wendy told me she tried to call them before that got published.

KW- What road number is Rock the South striping?

JL- I don’t recall; it was somewhere in the neighborhood of 3 miles. A little bit less. I didn’t even bring my…

CP- So basically, in a nutshell, any kind of work going into those roads to accommodate Rock the South, Rock the South is paying for?

KW- That’s all that’s happening is the striping.

JL- Yeah, all they’re doing is striping. All we are doing.

JL- No. We are getting a bond to insure against damage-potential damage, but there’s not proactive preparations that us or them are doing to get ready for Rock the South.