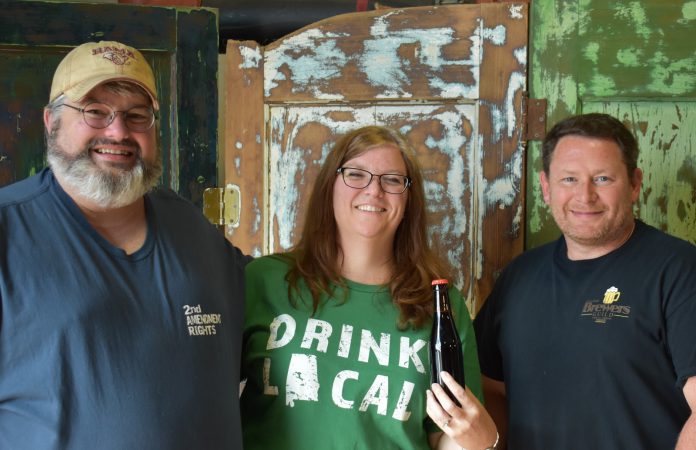 Left to right: Bryan Benefield, April Benefield and Preston Prewett were winners in the quarterly home brew competition.  First-place winner Jeff Taylor couldn’t attend the meeting, but bottles of his chocolate milk stout did, and one even survived long enough to make it into the photo! (W.C. Mann for The Cullman Tribune)

CULLMAN, Ala. – If you enjoy good beer, there are quite a few places in the wet cities in Cullman County where you can find some.  If you have a do-it-yourself spirit and often find yourself saying of the store-bought stuff, “That would be better if…,” there’s one group of people you should get to know.

The Cullman Brewers Guild has more than 50 members from Cullman and Blount Counties, about half of whom actively make their own beers, meads and wines.  They brew in Cullman, Hanceville and Good Hope (the rest of the county is dry) and across the county line. The group includes commercial brewers like the guys at Goat Island Brewing, but you won’t find products from most of them at your local restaurant or bar.  The majority are home-brewing hobbyists who can legally produce small batches, but aren’t licensed to sell alcoholic beverages. They do it for the joy of creativity and individual expression.

Guild President Jason Guidry told The Tribune, “It’s fun!  It’s getting to do something the way you want it. It’s like eating; you can go out to restaurants every day, or you can cook something at home.  By brewing at home, you can have it the way you like it instead of the way someone else likes it.”

The Guild gives members the opportunity to share ideas, compare recipes, sample each other’s projects and enjoy each other’s company.  The monthly meetings are laid-back gatherings with a conversation and a lot of laughing, as well as tasting of member brews and interesting or unusual (one at this month’s meeting contained edible glitter!) offerings from smaller commercial breweries.  They’re open to anyone: one brand new visitor to the March meeting joined in the conversation, and soon two bottles of his honey-based mead were being passed around the table while other mead brewers talked with him about ingredients and the virtues of various types of honey.

This month’s meeting featured the quarterly competition the Guild hosts for its members to show off their goods.  The category this time was porters and stouts, and Jeff Taylor took top honors with his chocolate milk stout. The next quarterly contest, scheduled for June, will feature brews made with fruits and vegetables.

It’s not all just sitting around, talking and tasting beer, though.  Members give educational presentations on brewing and winemaking and, more importantly, fundraising events regularly held by the group support area charities.  After last fall’s Oktoberfest generated $2,000 in tips for the Guild, which ran the beer tent at the event, the group gave the money to Cullman Caring for Kids, The Link of Cullman County, Flourish of Cullman, Cullman’s Little Pantry and Sacred Heart Church’s St. Vincent de Paul food bank.

Home brewer Preston Prewett, who helped deliver checks to the local charities, told The Tribune afterward, “It’s completely awesome.  A lot of people think that the beer tent is just a tremendous amount of work, and it is, don’t get me wrong. Oktoberfest is a ridiculous amount of work, but it’s so much fun because you get to talk to everybody that comes through to get a beer and get to explain all the different kind of beers and do a little craft beer education, but at the same time we get donations to give back to the community.  It’s just awesome, man.”

For more information on the Cullman Brewers Guild, visit www.facebook.com/cullmanbrewersguild/.