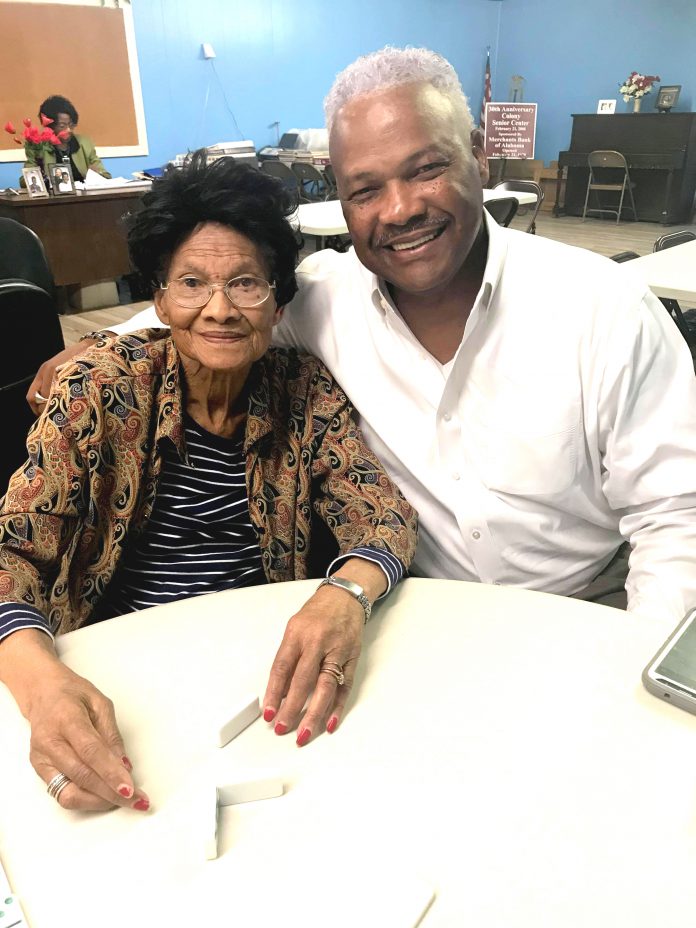 COLONY, Ala. – On most mornings, Ophelia Fields, 86, can be found at the Colony Senior Center playing dominoes with her many dear friends. They enjoy their morning coffee while keeping up with each other’s families and friends. On a recent morning, she was happy to be joined by her son, James Fields, to reminisce.

Ophelia was born in 1932. She said proudly, “I’ve been here my whole life- born and raised here.”

She grew up on a farm with her three brothers and went to Colony School through the ninth grade. For fun, Ophelia liked playing ball. She played basketball and baseball when she wasn’t at school or working on the farm.

She said, “I loved to work on the farm-especially picking cotton.”

James added, “She was a good cotton picker. That’s for sure.”

When asked, Ophelia laughed at the idea of adding rocks to her bag for extra weight. She laughed, “No, no. I never cheated.”

James recalled, “She’d be pulling that sack while one of us would be laying on the sack and the other would be walking beside her. We used to go to the blackberry patch. We’d pick them and can them. I’d eat about as many as I’d pick. I remember the last time I picked, I just happened to look down in my bucket. There was a big green snake. I dropped everything. It startled me.”

Ophelia had 11 children. Four of her children died at birth and one son, Matthew, died when he was just a few weeks old.

James explained, “No one knew about crib death back then.”

Ophelia also had a daughter who passed away at the age of 24.

She smiled and nodded as she listened to James tell about his childhood. Their shared recollection of the simple things from their lives was special.

James continued, “Back then, blackberries were everywhere. They were plentiful. Plums were wild and grew everywhere. It was a commodity to find yellow plums. Oh yeah! Yellow plums were big and juicy. Right before you got to our house was the house of a gentleman named Mr. Hubbard. He had a bunch of pear trees and plums. They had yellow plums when everywhere else had red plums. I remember eating so many of those things I’d get sick. I couldn’t wait until they got red. I’d eat em’ green.”

The main road in Colony wasn’t paved until the 60s, and a trip to Hanceville or Arkadelphia wasn’t easy. The residents would get together at church or meet at “platter parties.”

James explained, “Platter parties was basically a guy spinning records and everyone would dance. They’d sell chicken and fish sandwiches. DJs would come up from Birmingham.”

Back then, Boyd Grocery was the main store and it had a barbershop. Later Mr. Lurie Johnson would open a store with a party place called “The Dew Drop In.” He also cut hair in his barbershop.

“Every week a salesman from Ratliff Wholesale, Mr. Fisher, would come and Mr. Matthew (Boyd) would place their order for milk, flour, sugar, salt and other things he needed. The thing I remember about Johnson’s Dew Drop In is they had Greg’s Cookies in a giant canister with a red lid and lettering.”

The Fields did not venture to Cullman often because of the distance. The main road in Colony was a dirt road and Ophelia said, “Years ago we either walked everywhere or took the wagon.”

James remembered a story about the sons of midwife Kizzie Montgomery Leeth.

James said, “Kizzie married William Leeth. Supposedly, he was a relative to the Leeths from Leeth National Bank in Cullman. That was the story I was told. They had six boys, three of them were very light-skinned and three were very dark-skinned. They used to tell the story about how they’d go to Cullman and the light-skinned brothers could go and sit at the counter at Kuhn’s five-and-dime. The other brothers would be in the corner laughing. I never knew there was a theater around from Vincent Furniture next to the Briscoe Shoe Shop. There used to be a theater right there, but because we couldn’t go to the theater, I never knew.”

Many changes would come to Colony in the late 60s due to the end of segregation. James was a student at Colony School in 1967 and he explained, “Integration came about and the first year they selected a group to go to Hanceville. The next year, 1968, everyone went to Hanceville. The first year was sort of like a trial. The children that were chosen, from my perspective, were the children that they felt could easily assimilate- clean, parents had a little more than we did. My first formative years, up until I was like 6 or 7, my father worked in the mines, earned a lot of money and always drove brand new cars. I was in sixth grade when I got to Hanceville.”

Some of James’s cousins were selected to attend Hanceville the first year and they helped the following year by introducing him to some of the kids they knew. The teachers and staff from Colony School were also placed at schools throughout Cullman County.

Ophelia was a hard-working stay-at-home mom until the late 60s. She went to work at Goldenrod Broiler. Many of the women from Colony worked at Goldenrod. It was tough work, but Ophelia said with a smile, “I loved it.

Meanwhile, James was now attending school in Hanceville and it wasn’t always easy.

He laughed, “When I got there, I got in a fight with Donald Whatley, but we wound up being best friends. I bought a car from him-a ‘57 Chevy. We traded a ‘66 Chevelle that didn’t run for the ‘57 Chevrolet. Our class gelled though. We played sports together and we would compete with Holly Pond.”

James grimaced as he thought of Hanceville’s football rivalry with Holly Pond.

James recalled hearing the “n word” often after the schools were integrated, saying, “I would hear it in casual conversations and sometimes when I got tackled in football, the other team would call me that.”

Although James and his new Hanceville classmates bonded, he said, “We thought we’d go to Good Hope or Cold Springs. We sharecropped alongside those families and thought it would be easier because we knew those guys. Our parents worked with them, drank with them, moonshined with them, but it was determined that Hanceville was the safer route.”

After graduating from Hanceville in 1973, James attended Gadsden State and Jacksonville State where he earned degrees in criminology and sociology. He retired from law enforcement as a fraud investigator and worked in Governor Don Siegelman’s cabinet. Ophelia left Goldenrod and went to work for Americold Compressor. She retired from Americold. James would eventually serve in the Alabama House of Representatives from 2008-2010.

He was open about the topic of racism and Cullman County’s reputation. He told a story from before he became a legislator.

“I was at Wal-Mart in Cullman several years ago, at least 10 years ago. There were several young black ladies there I had stopped and talked to. As I was leaving, a lady in a van full of children came up beside me. The lady went ballistic. I said to her, ‘Do you think I’m a child predator or something? Let me introduce myself to you.’ She said, word for word, ‘Just because you’re black doesn’t mean they are from The Colony!’ I said, ‘Ma’am, I said look, I didn’t mean any harm. Let me apologize to you. Have a nice day.’”

He continued, “Ya know, that caught me off guard so and I just said there’s something wrong with that lady. Here she is providing a service for kids who have been mistreated or thrown out. She was from Childhaven and there’s no way she is still there. You run into pockets of that. Sometimes you expect it and sometimes it catches you off guard. I don’t think a lot of times we take the time to get to know one another and we know these things exist.”

James would not win his bid for re-election in 2010 after facing his good friend Mac Buttram in a tough campaign. Buttram was James’ mentor as he became a pastor in the United Methodist Church. Buttram conducted the funeral service of James’s wife, Willie Mae, and officiated his wedding when he remarried four years later.

James is now pastor of St. James United Methodist Church in Irondale. Ophelia gushes with pride about  her son and his accomplishments. She has been retired for many years and spends her days at the Colony Senior Center. She likes spending time with friends and doing word puzzles.