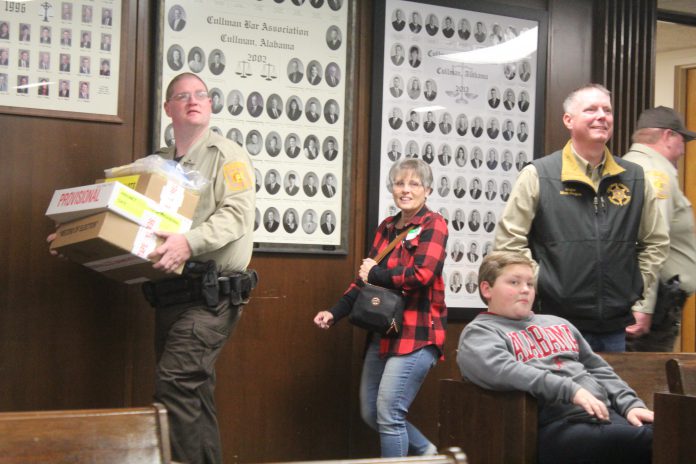 CULLMAN – On Tuesday evening, four of the five school tax renewals that have stirred much local debate passed, renewing the one-mill and three-mill county-wide taxes, plus two of the three local district taxes. Of the 58,332 registered voters in the Cullman county, only 4,143 cast ballots for a voter turnout of 7.1 percent.

Provisional ballots have not been counted, but the number will be minimal; one worker reported seeing none turned in.

What happened in Arab?

Students who live in the New Canaan community, in northeast Cullman County along the Marshall County line, who comprise just under two percent of the county’s student population, attend school in Arab; so just under two percent of the county-wide tax goes to that system for them. That community was also supposed to vote on the three-mill Arab district tax but, for an unknown reason, not a single vote was cast on that measure, either for or against. Probate Judge Tammy Brown, who oversees county elections, said that the matter will be reviewed over the next few days.

Dr. Susan Patterson, Superintendent of Cullman City Schools, was present at the courthouse with some of her staff, board members, and principals for the vote count. After the last city district votes were posted, she issued this statement:

“On behalf of our students and staff, I would like to thank the voters for their continued support. This 30-year renewal will allow Cullman City Schools to continue offering a world-class education to all our children. So many of our academic programs are dependent on these funds and the approval by voters demonstrates their belief in the quality of our schools.”

County Superintendent Dr. Shane Barnette could not be reached for comment.