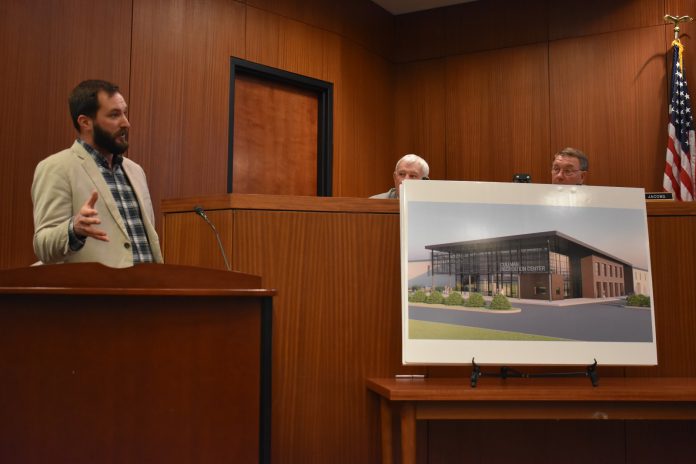 CULLMAN, Ala. – Cullman Parks, Recreation, & Sports Tourism Executive Director Nathan Anderson on Monday night unveiled his department's long-term plan. During the Cullman City Council meeting, Anderson announced his department is planning the construction of a new multi-sport indoor complex at the site of the old Marvin’s store on Main Avenue Southwest across from Heritage Park and adjacent to the Cullman Wellness & Aquatic Center.  The facility will feature six full-size basketball courts and will also support numerous other sporting and non-sports events.

Anderson described the planned development as “a four-year planning and research project for us.  Shortly after I was hired on, we did a large community survey, and one of the top needs within our community was more indoor space, or bringing on additional sports or grow sports that require indoor space.  So we knew a long time ago that we had a large local need for more indoor sports space, but, as we’ve done with Heritage Park and Field of Miracles, we wanted to make sure that we were smart with the use of facilities, and while we’re not doing local activity on it, we’re finding a way to use that to generate money and bring exposure to our community.”

City of Cullman representatives have visited other similar-sized cities with sports complexes across the country to study what they did, the types of complexes they built, and their success rates.  Comparing what they knew of Cullman to what they found, according to Anderson, gave CPRST confidence that such a project can succeed here.

Plans for the proposed facility include basketball, volleyball and other court sports.  Anderson verbally brainstormed about possible martial arts, dance, cheer, gymnastics and fencing events, among others.  In addition, the complex could host community and commercial events like trade shows, expos, conferences and concerts. Being able to put on events inside also means that weather will not be a factor in planning or carrying out events.

Said Anderson, “Instead of trying to fill what’s been about 42 to 44 weekends–if the weather cooperates–of sports tourism activities, we now can fill a calendar year.  It doesn’t matter what the weather does; the show goes on.”

According to Anderson, CPRST already has tentative agreements with promoters for 12 sports tournaments representing eight different sports in the first year after the complex’s projected opening in 2021.  He stated that the overall facility that will be created by the complex and adjacent Wellness and Aquatic Center, Field of Miracles, and Heritage Park will rank Cullman among the top sports tourism destinations in the country.

Construction is projected to begin in the next six to nine months, and CPRST hopes to open the complex in 2021.