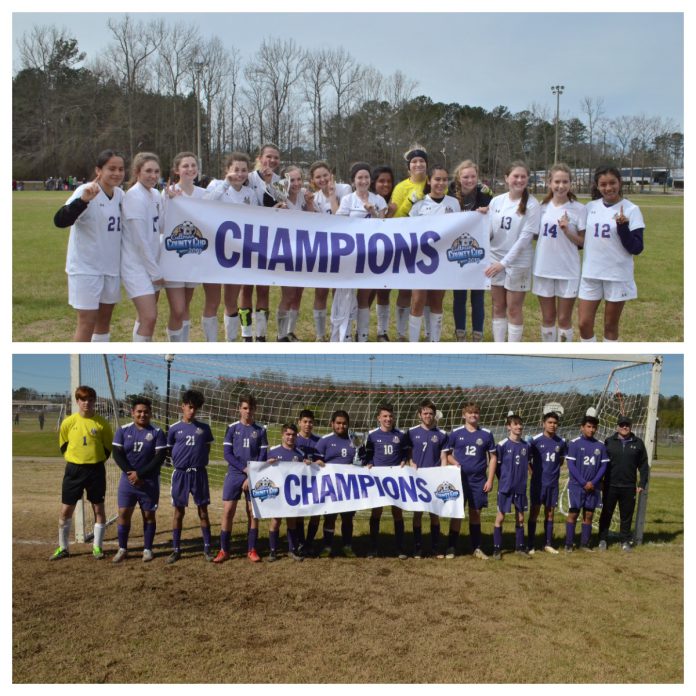 CULLMAN, Ala. – Heritage Park was the site for this year’s inaugural Cullman County Cup and the field was made up of boys’ and girls’ teams from Holly Pond, Good Hope, Fairview and West Point. The girls kicked things off in the morning with a pair of one-sided, semi-final matchups. Fairview handled the Lady Raiders 10-0 to advance to the title game and the Lady Warriors knocked off Holly Pond 7-0 to secure a spot for themselves. On the boys’ side, the Aggies blew past Holly Pond 10-0 while Good Hope punched its ticket to the title game with a 9-2 win over West Point.

The first championship matchup between the Lady Aggies and the Lady Warriors was the first tight game of the day and West Point got things started with a goal from Kylie Armistead that made it 1-0 in the opening minutes.

That score held for most of the first half, but Sydney Babb put one in the back of the net for Fairview just before the break to make it a tie game at the half. Both teams continued to play well on the defensive end but a goal from Greta Bishop was enough for the Lady Aggies to pull ahead and hold on to win it 2-1.

After the game, Fairview Head Coach Nick Feldner reflected on Babb’s goal at the end of the first half and believes it was a big key to his team finding a way to win it down the stretch.

“We opened up the game giving up a quick goal to West Point and that kind of set us back and we were total off-guard with that,” Feldner said. “We saw what kind of potential and speed they had so we were playing catch up the whole time and I think if we didn’t get that goal to equalize it going into the half, it would’ve really been a struggle to rebound in the second half.”

The boys’ title game got underway next and the Fairview Aggies didn’t have a lot of trouble setting the tone against Good Hope. Two quick goals in the opening minutes of the game put the Raiders in a hole early and Fairview managed to stretch the lead to 4-0 by the halftime break.

The Aggies tacked on two more goals in the second half to officially put the game out of reach and secure their place as county champions. Luis Cortes and Jaxxon Swann each scored two goals in the win for Fairview. Will Butler and Ricardo Medina each scored a goal for the Aggies as well and Bailey Byrd collected an assist.

Feldner is also the head coach for the boys’ team at Fairview and he was happy to see his team take control of the game early and play their game.

“The first time we played Good Hope about a week ago, we were kind of in the opposite situation. We were fighting the whole match there so to be able to settle in early makes a huge difference. When you get to play your game and not let the other team dictate what you’re doing, we can calm down, control the game and play the way we like to play.”

Feldner is proud that his teams were able to perform well during the event, but he was even more excited that the event happened at all. He’s optimistic that this year’s Cullman County Cup could lead to even more developments for soccer across the community.

“Our ultimate goal has always been to help get programs for all of the county schools and help build that up so to finally see us have enough teams to put together an event is a really big deal and if nothing else, we get a lot of promotion and publicity out of this that we hope bleeds into all the other programs,” Feldner said. “I still think people are a little shocked when they hear that we have county school soccer programs so that means more than anything else.”