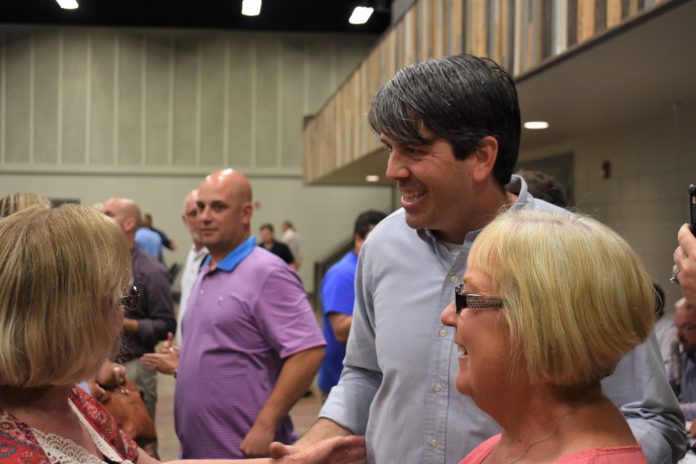 On Tuesday, Governor Kay Ivey signed the Rebuild Alabama plan (House Bill 2) into law—understandably, this measure to increase Alabama’s investment in infrastructure has received a lot of attention. Alabama’s gas tax has been 18 cents since 1992, when Cullman’s own Guy Hunt occupied the Governor’s Mansion.

I want to lay out the facts about the Rebuild Alabama plan, and why I supported it.

Here’s another statistic that hits close to home for me, as a father of two sons still in school: 375,000 kids ride school buses each week in Alabama, and in many counties, school bus drivers have to go miles out of their way to avoid unsafe bridges. Alabama’s chronically under-funded roads and bridges are endangering the lives of our loved ones.

Second, Alabama’s crumbling infrastructure has a negative effect on our ability to compete for jobs with neighboring states. Coming into 2019, Alabama had the lowest gasoline tax rate in the Southeast; even Mississippi had a higher rate. Georgia, Tennessee, Florida, Arkansas, and South Carolina all fund infrastructure more than we do. According to a 2017 survey by Area Development Magazine, highway accessibility is the number one factor corporate executives consider when evaluating a potential business site. Alabama has had one hand tied behind its back, as we have gone toe-to-toe with neighboring states for new industry.

Here is a brief summary of what the Rebuild Alabama plan does: it increases the state gasoline and diesel tax by 6 cents this year, 2 cents in 2020, and 2 cents in 2021. Beginning in 2023, it also links the gas rate to a national index; but the rate could not increase or decrease by more than 1 cent every two years. This investment in our state’s future will cost the average Alabama driver an additional 15 cents a day, or about the same as a cup of coffee every two weeks.

The 10-cent increase will mean $320 million annually in new infrastructure money for roads, bridges, and the Port of Mobile—and every single county and town in the state will see additional money. For instance, according to information provided by the Governor’s Office, the Cullman County Commission will receive an additional $1.2 million annually for roads and bridges.

Let me say a brief word about the Port of Mobile’s funding, which will be about $11.7 million out of the total $320 million. Every single county in Alabama has workers and businesses that rely on the Port to export their products. Poultry, cotton, timber, coal, and many other Alabama industries use the Port to sell Alabama’s products to the world. In 2018 alone, $2 billion of Alabama coal was exported via the Port, and on average we export $420 million of poultry products.

Senator Richard Shelby, Chairman of the U.S. Senate Appropriations Committee, has indicated that he can work with President Trump and Congress to secure $3 in federal resources for every $1 the state puts towards the Port. Using a small portion of infrastructure dollars to match federal grants to deepen and improve the Port is important for job growth across the state, especially since Alabama and Mobile are competing with ports in Miami, Houston, and Savannah.

I co-sponsored a bill, which Governor Ivey signed into law, that puts in place strict accountability measures for how ALDOT can spend this money—the revenue from the Rebuild Alabama plan can go to infrastructure projects, and infrastructure alone. Governor Ivey strongly agreed with the Legislature on this point, and as a safe-guard, we included language in the law that strictly limits the use of this money to road and bridge projects as well as the Port of Mobile.

During legislative debate at the Statehouse, Representative Randall Shedd and I supported two amendments to the bill: the first would have given low-income folks an income tax refund against the gas tax, and the second would have sunset the gasoline index. The amendments were tabled, but I received assurances from Senate leadership that both ideas would be given ample consideration in the regular session that resumes on March 19th.

Starting in January, all county commissions and towns and cities will receive direct appropriations from the Rebuild Alabama plan for road and bridge projects. As a conservative, my priority is making sure that the core responsibilities of state government—law enforcement, infrastructure, and high-quality schools and colleges—are accomplished as efficiently as possible. The Rebuild Alabama plan is a fiscally-responsible investment in new roads, and a better future, for all Alabamians.

Garlan Gudger, a Republican, represents State Senate District 4, which is comprised of all or parts of Cullman, Lawrence, Marion, and Winston counties.