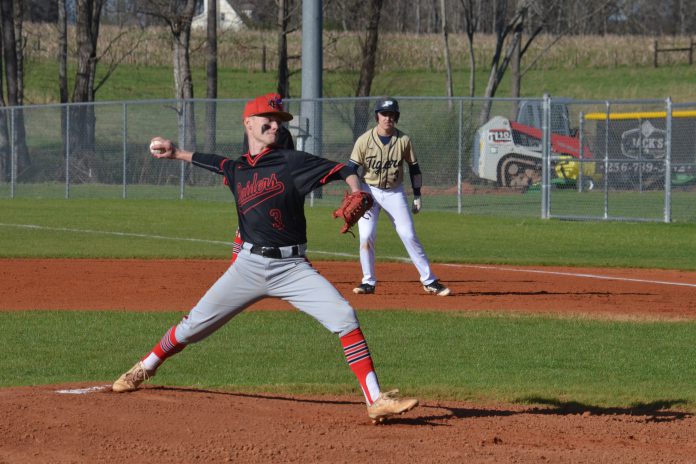 Bailey Quick got the start for the Raiders and held J.B. Pennington scoreless for six innings, giving him his second win of the season on the mound. (Nick Griffin for The Cullman Tribune)

GOOD HOPE, Ala. – The Raiders hosted J.B. Pennington for a Friday night matchup and the Tigers nearly came from behind in the seventh inning, but Good Hope managed to hold on and win it 5-3. Bailey Quick got the start for the Raiders and held J.B. Pennington scoreless for six innings, giving him his second win of the season on the mound.

After two scoreless innings, Preston Bagwell gave Good Hope a 1-0 lead with an RBI single in the bottom of the third. In the fourth, Paydon Bagwell stretched the lead to 3-0 with an RBI double and a sacrifice fly from Austin Wright made it 4-0 going into the fifth inning.

Another sacrifice fly from Wright extended the lead to 5-0 in the sixth and gave Good Hope a comfortable lead heading into the final frame. Things got a little shaky in the top of the seventh when three RBI singles cut the lead to two, but Matt Hancock was able to get the final out on the mound and the Raiders won it 5-3 on their home field.

Good Hope recorded just two hits in the win, coming from Preston and Paydon Bagwell. Wright also posted two RBIs for the Raiders. Good Hope will look to keep things rolling in the right direction when it travels to Fairview on Tuesday.

Cooper Beck made things difficult for the Bucs during their matchup with Cullman on Friday and his performance on the mound helped lift the ‘Cats to a shutout win on the road. Beck put together a no-hitter in the win over Hoover, walking one and collecting eight strikeouts. Peyton Colvard went 3-for-4 at the plate with two RBIs in the win and Brennen Norton (two hits) drove in a run as well.

The Blue Devils held a 4-0 advantage going into the fourth inning, but the Broncos rallied and caught fire at the plate to come from behind and win it 10-6. Andrew Light was 2-for-3 with three RBIs in the win and Jacob Ring and Alex Corneglio each drove in a pair of runs as well.

Oakman took a 2-0 lead early, but the Eagles tied the game in the third inning and moved ahead for good in the fourth. Lawson Burgess finished 3-for-4 at the plate for Cold Springs. Brylan Aaron was 2-for-3 with three RBIs and Ayden Alexander, Jake Abbott and Logan Rice each added two RBIs in the win.

The Bulldogs took all the drama out of this one right out of the gate by plating 12 runs in the first two innings and they cruised to an 18-2 rout of Fultondale the rest of the way. Tate Brown, TJ Kubia, Zach Campbell and Kainen Cruce each collected two RBIs for Hanceville in the win. Mark Dyer got the start and the win on the mound after tossing three spotless innings and racking up eight strikeouts.

The Bearcats dropped their Friday night home matchup against the Raiders 4-1. Washington Sheffield scored the only goal of the game for Cullman.

After taking a 4-0 lead through three innings, the Lady Warriors held the Corner bats at bay and pulled away to win it 6-2. Makayla Brown led the way for West Point offensively by going 2-for-2 at the plate with three RBIs. Gracie Abbott also finished 2-for-2 at the plate and Molly Pendley and Sydney Sellers each drove in a run.

The Lady Warriors took the lead over Lamar County in the top of the first and never gave it up. Molly Pendley was 2-for-2 with two RBIs at the plate and Sydney Sellers (one RBI), Carlie Wilkins, Makayla Brown, Bethany Minck and Gracie Thompson each recorded a hit for West Point in the win.

The Lady Eagles plated three runs in the opening frame of this one, but Lexington took a 4-3 lead in the bottom of the first and never gave the lead back. The Lady Golden Bears pulled away to win it 6-3. Maddie Oliver, Hailee Moore and MacKenzie Lawrence recorded the only hits of the game for Vinemont and Emma Dortch finished with one RBI.

The Lady Bearcats jumped out to a 6-0 lead in the first two innings and Pope John Paul II was never able to catch up. Cullman pulled away to win it 6-3. McKenna Kline (two RBIs) and Faith Guest (two RBIs) collected the only two hits in the win for the Lady Bearcats.

After a pair of scorless innings, the Lady Tigers tacked on a run in the bottom of the third, but Dora took a 2-1 lead in the top of the fifth. Meek managed to bring one more run across the plate in the bottom half of the inning to force the tie. Bailee Fincher collected both hits of the game and an RBI for the Lady Tigers. Autumn Peek went all five innings on the mound, allowing two runs on two hits and picking up four strikeouts.

Sulligent took a 3-0 lead in the bottom of the third and the Lady Eagles were never able to overcome that deficit and fell on the road 6-2. Kylon Hamby finished 2-for-3 at the plate for Cold Springs.