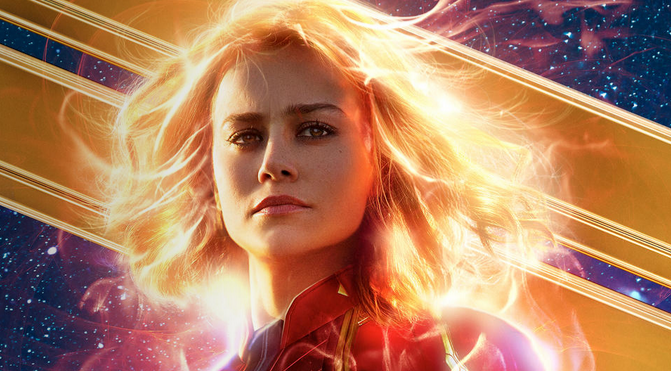 “Captain Marvel” is written and directed by Anna Boden and Ryan Fleck and stars Brie Larson as the titular new addition to the Marvel Cinematic Universe (MCU). Larson is joined by a familiar face from the MCU, Samuel L. Jackson as Nick Fury. Since the film is set in 1995, Jackson’s face was digitally altered to appear younger for the entire runtime; Marvel has perfected this technique ever since it first appeared in 2015’s “Ant-Man.” Jude Law stars as Yon-Rogg, a Kree special forces commander.

The film opens on the Kree home world and immediately we are introduced to a more civilized and subdued portion of the Kree Empire than the one we see in 2014’s “Guardians of the Galaxy.” Carol Danvers, aka Captain Marvel, is a Kree soldier in Yon-Rogg’s unit and the opening mission of the film kicks the plot into gear.

Carol has always had questions about her past and fragmented memories, but once she reaches Earth, she begins to put the pieces together and we follow her along the way. We’re also introduced to a new species of the Marvel Universe, the Skrulls. The Skrulls are shapeshifting aliens who defeat their enemies through infiltration rather than force, and their abilities make for some cool scenes with surprises and twists throughout the film.

The best thing this newest MCU instillation has going for it is the chemistry between Nick Fury and Carol Danvers. For most of the second act, they have a buddy cop dynamic that is fun to watch and establishes a relationship that comes into play after the credits of “Avengers: Infinity War.” Fury’s latest depiction doesn’t really mesh with any of the others we have seen in earlier MCU films, but it makes for a fun supporting character in this one.

Where the film is lacking is its characterization of Carol Danvers. It’s understandable that she would be kind of a blank slate in the earlier parts of the movie because she’s still learning who she is, but by the end, she is essentially the same person she was when we met her. “Captain Marvel” feels a lot like a phase one MCU film in the vein of “Captain America: The First Avenger” and “Thor,” but unlike those films, we didn’t really get to know the main character. Thor, Steve Rogers, Tony Stark and several others were given very clear, character building arcs in their introductions, but Carol’s isn’t quite there. She’s funny and powerful, but once she discovers more about her past, it doesn’t seem to affect her personality or her emotions. Larson still gives a solid performance in a solid film, but if the MCU origin movies are meant to be built on the main character, “Captain Marvel” comes up just short among the others.

Overall, it feels like this film had to be made because Carol Danvers needs to be part of “Avengers: End Game,” but that doesn’t mean it’s not worth seeing. There are several fun surprises that come from the Skrulls, lots of MCU Easter eggs to look and listen for, and as you would expect, some very fun action sequences. It’s not one of the best, but this latest addition to the MCU should be enough to hold you over until the Avengers re-assemble in April.