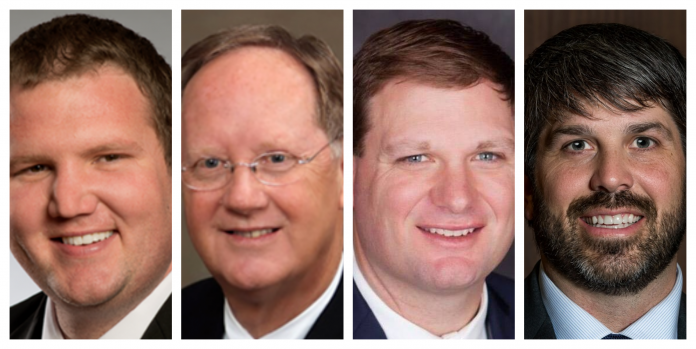 What will our legislators be doing?

Each legislator has been assigned to serve on certain House or Senate committees:

Legislation proposed or supported by members of Cullman County delegation

Cullman County’s legislative delegation has had a hand in pre-filing certain pieces of that collection of bills.

HB19 – Introduced by Rep. Kyle South (R, Distr. 16), cosponsored by numerous others including Rep. Randall Shedd, Rep. Corey Harbison, and Rep. Scott Stadthagen.  The bill would require the State Board of Education to review and approve any rules relating to student participation eligibility before adoption by any high school athletic organization, and would require 25 percent of the membership of the governing body of that organization to consist of individuals appointed by the State Superintendent of Education or the State Board of Education.

HB22 – Introduced by Rep. Chris Blackshear (R, Distr. 80), co-sponsored by Rep. Corey Harbison and Rep. Scott Stadthagen.  The bill would allow a person who is a resident of a state bordering on the State of Alabama who carries on a business, profession, or who is regularly employed in the State of Alabama to be commissioned as a notary public by the judge of probate of the county in which the person carries on his or her profession, business, or employment.  Currently, any Notary Public in Alabama must be a resident of the state.

HB37 – Introduced by Rep. Scott Stadthagen and co-sponsored by others including Rep. Randall Shedd, the bill would encourage state agencies to save money by allowing them to keep ten percent of any unspent money from their budget in a given year and convert that money into employee bonuses.  The other 90 percent of unspent funds would revert to the state’s General Fund, so that it could be rerouted to other places where extra funds might be needed.

In 2018, the state enacted a law (SB1, Act 2018-517) named in part after Cullman teen Curtis Wilson, who was killed by a drunk driver (A reckless murder case against the driver is still pending), requiring persons charged with DUI and enrolled in pretrial diversion programs to have ignition interlock devices installed in their cars.  The devices would require the driver to pass a breathalyzer test before the car will crank. See www.cullmantribune.com/articles/2018/04/25/new-law-targeting-drunk-drivers-named-after-cullman-dui-victim-curtis-wilson.

The law as enacted last year was what is called a “sunset act,” a law which only remains in effect for a specific time.  Act 2018-517 is currently set to expire in July 2023. The amendment, proposed by Sen. Jim McClendon, R-Springville, who sponsored SB1 in 2018, would remove the sunset clause and make the interlock act permanent.

Gov. Kay Ivey on Wednesday announced her Rebuild Alabama Infrastructure Plan, which proposes a 10-cent increase in Alabama’s fuel tax with an index designed to coincide with the rising costs of building roads. Alabama currently imposes a flat excise tax of 18 cents-per-gallon on gas and 19 cents-per-gallon on diesel, without adjusting for inflation and other construction and maintenance costs. The governor’s office said this combined fuel tax revenue generates 80 percent of Alabama’s transportation funding. The plan’s 10-cent increase, which is being hotly debated, would be phased in over the next three years.

Ivey said new revenue generated by the increase would be dispersed between state, county and municipal governments in Alabama, with these funds to be used for transportation infrastructure improvement, preservation and maintenance projects. A separate portion of the revenues would go to pay a bond to be issued to finance improvements to the ship channel providing access to the facilities of the Alabama State Docks.

During the session, you can contact your legislators in their Montgomery offices at the following phone numbers and email addresses.  Rep. Stadthagen does not currently have a House email address; the address came from his personal legislative website.