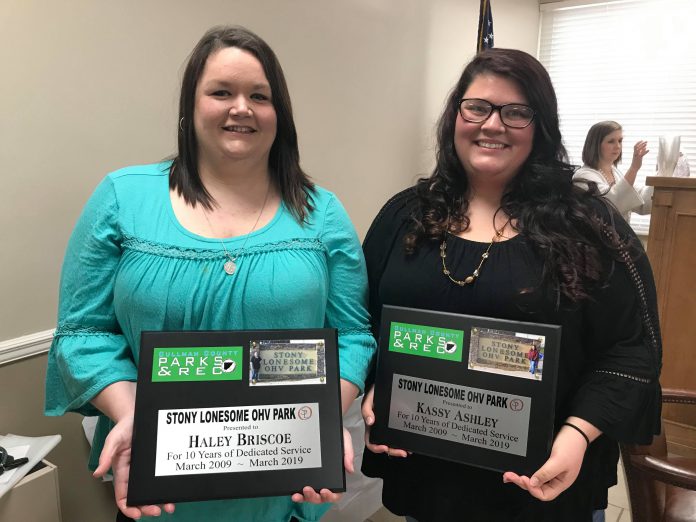 Stony Lonesome OHV Park employees Haley Briscoe and Kassy Ashley were given special plaques in appreciation for their dedication shown to the park. The two have been employed at the park since the day it opened in March 2009. (Christy Perry for The Cullman Tribune)

CULLMAN, Ala. – The Cullman County Commission Tuesday morning recognized staff from Stony Lonesome OHV Park, which opened 10 years ago in March 2009. Employees Haley Briscoe and Kassy Ashley were given special plaques in appreciation for their dedication shown to the park. The two have been employed at the park since the day it opened. A small reception was held following the meeting.

Cullman County Park and Recreation Director Doug Davenport thanked the all the staff and commission before recognizing Briscoe and Ashley, joking, “We had to mislead them and tell them they were here about a car wash. They’ve been with us since the beginning and we really appreciate them.”

Special recognition was also given to Cullman County Human Resources Manager Judy Bradford, who recently completed requirements for designation as an Alabama Certified Human Resource Professional. She becomes one of only 67 individuals in the state of Alabama to earn the special distinction. The announcement was made by the Alabama Public Personnel Administrators Association (AAPPA) and the Government and Economic Development Institute at Auburn University. A special ceremony will be held in Foley, Alabama July 24-26 where the AAPPA will present Bradford with a certificate.

A formal declaration of a “State of Local Emergency Conditions” was made by the commission due to the excessive amount of rainfall received Feb. 17-23. Cullman County Emergency Management Agency (EMA) Director Phyllis Little expressed concerns about areas that have experienced flooding and said she anticipates additional issues as the water levels continue to rise.

Commissioner Kerry Watson appointed T.J. Franey to the Department of Human Resources Board to fill the term of Jim Walker, who recently passed away.

The commission approved a construction agreement with Temple Baptist Church for the construction of a turn lane at the intersection of County Road 1184 and Alabama Highway 157.

Several bids were also approved, including: