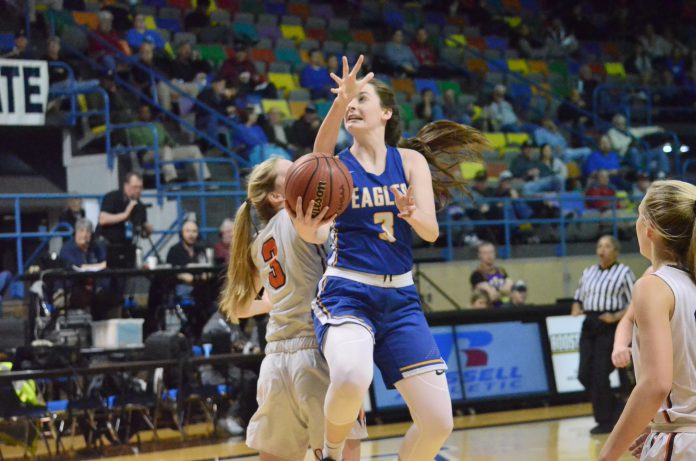 Elizabeth Hill (3) led the Lady Eagles with 23 points in their 54-36 win over Red Bay Tuesday night. (Nick Griffin for The Cullman Tribune)

HANCEVILLE, Ala. – Cold Springs officially punched its ticket to the 2019 AHSAA State Tournament Tuesday night with a 54-36 win over Red Bay in the Northwest Regional Tournament finals. It’ll be the Lady Eagles’ first trip to the final four since 2009 and with three state titles under her belt already, head coach Tammy West and her squad will be ready to go when they hit the floor in Birmingham on Monday.

After the game, West said she was proud of the effort her team put out on the floor and had to mention both Red Bay’s performance and the performance of one of her star players.

“I’m just proud of them. We played hard and I thought Red Bay did a great job tonight. They shot the ball well. I’ve watched them a lot and hadn’t really seen them shoot like that, so they were prepared and played good defense but Elizabeth Hill just kind of took the game over,” West said. “She was able to get to the rim and finish and we were able to get the win, finally.”

The season ended for Cold Springs here at the Northwest Regional last year when the Lady Eagles fell to Phil Campbell so this year’s team has been on a mission to avenge that loss and make a run at a state title.

“You know we’ve had some big wins down here the last two years, but we haven’t been able to get the big win,” West said. “So, it was a great feeling when I looked up and realized it with about six seconds to go and felt good about it because they’ve worked extremely hard to get to this point and this is all we’ve talked about ever since last year when we lost down here so it feels pretty good.”

One of the players on the court during that loss last season, Camryn Crider, has been a senior leader and impact player for this year’s team. The senior sniper has wanted to play in the final four for as long as she can remember, and now, she’ll get her chance.

“I’ve actually always dreamed about this,” Crider said. “Ever since I was in second or third grade and watching (West’s) last team that went to Birmingham and I never actually thought I’d get to go but now I get to go.”

Red Bay scored the first point of the game to take an early lead, but the Lady Eagles quickly took control with a 16-4 run that gave them a big lead late in the opening quarter. The Lady Tigers got hot from three-point range in the final two minutes of the first and managed to cut the lead to 19-16 by the end of the quarter.

Red Bay drilled another three to tie the game at the start of the second but a 3-pointer from Toni West put Cold Springs back in front 22-19 midway through the quarter. The Lady Eagles added to their lead with a three from Crider that made it 27-19 late in the second and Cold Springs went into the half with a 31-21 advantage over the Lady Tigers.

Red Bay trimmed the lead to 31-24 with a 3-pointer early in the third quarter but the Lady Eagles answered with a 6-0 run to make it 37-24 late in the period. A 3-pointer from West stretched the lead to 42-25 with just under two minutes to play in the third and it was a 42-28 game going into the fourth quarter.

Hill added to the lead with a layup early in the final frame that made it 44-29, but she was forced to leave the game shortly after that with an ankle injury. Coach West expects Hill to be ready to play on Monday.

The Lady Tigers scored to cut the lead to 44-33 midway through the period, but a pair of free throws from Kylon Hamby made it a 48-33 game with just under three minutes to play. West knocked down a pair of free throws with just over a minute remaining to stretch the lead to 51-33 and that put things out of reach for Red Bay. Cold Springs pulled away to win, it 54-36.

Hill led the Lady Eagles with 23 points, followed by West with 11 and Crider with eight. Hill, Crider and West were all selected to the Northwest Regional All-Tournament Team and Hill was named as this year’s MVP. Cold Springs will get a few days off to rest up and refocus before heading to Legacy Arena in Birmingham on Monday for a matchup with the G.W. Long Lady Rebels at 3 p.m.