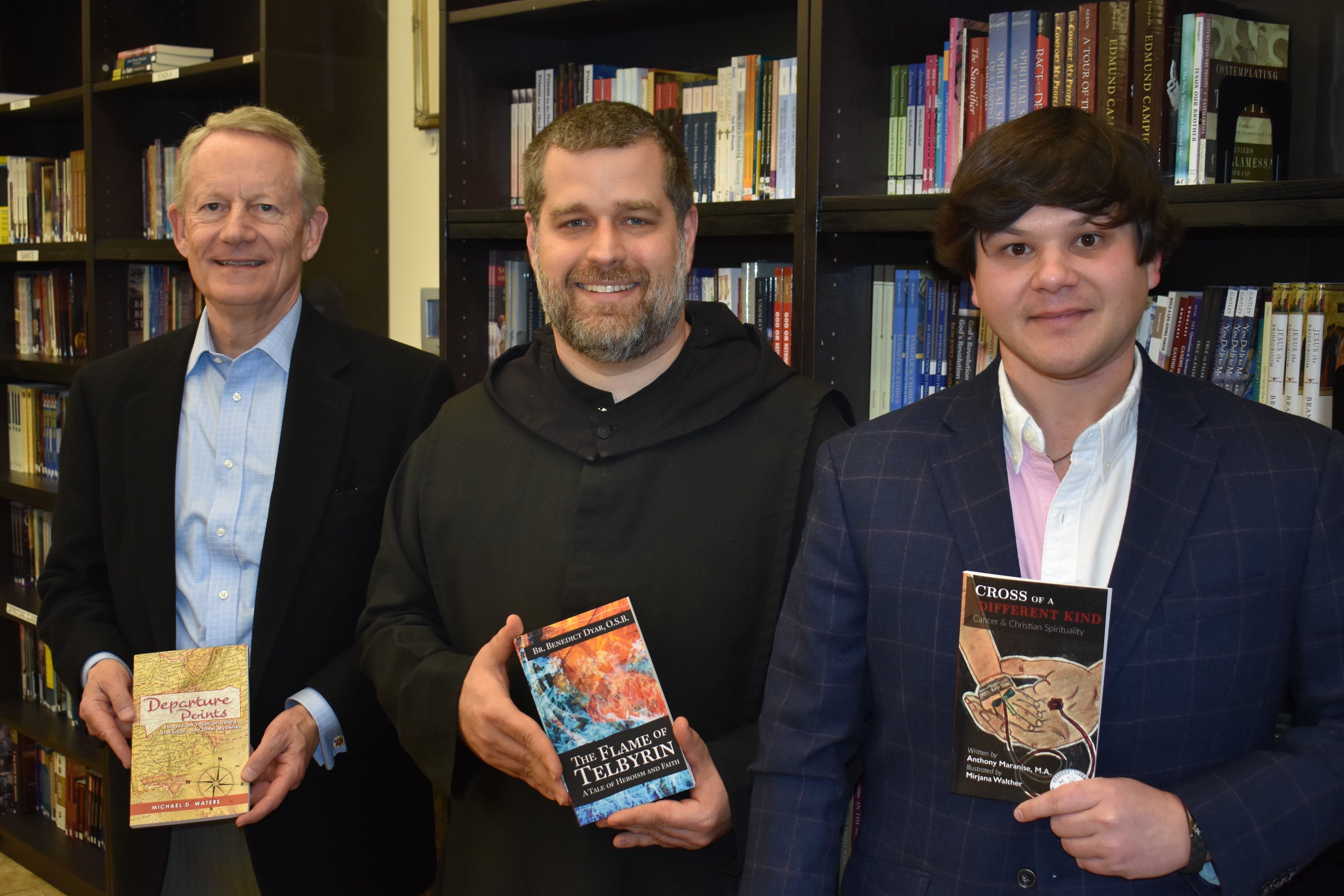 Authors (left to right) Michael Waters, Br. Benedict Dyar and Anthony Maranise pose for a photo at the Ave Maria Grotto on Saturday, Feb. 9, 2019. (W.C. Mann for The Cullman Tribune)

CULLMAN – On Saturday, the Ave Maria Grotto gift shop and bookstore welcomed three authors with Cullman connections who came to introduce and sign copies of their new books.

Br. Benedict Dyar is a member of the Order of St. Benedict and a monk of St. Bernard Abbey in Cullman.

He wrote the Christian fantasy “The Flame of Telbyrin,” about which he said, “I wrote it about two years ago.  It took me about eight months to write the story, and it took about a year to publish it.  And it was a joy to write, really was; (it) has great characters, I think. (I’m) really pleased with the work.  I hope it really brings light and life to the readers. I think we’re living in a day and age where a lot fiction is kind of dark and all that kind of thing, and I hope that this story really brings out some light and joy in the readers.”

Anthony Maranise is a doctoral scholar at Creighton University and a Benedictine Oblate at St. Bernard Abbey.  A childhood leukemia survivor, he wrote “Cross of a Different Kind” as a way of understanding and responding to cancer from a spiritual point of view.

Maranise told The Tribune, “’Cross of a Different Kind’ is, more or less, a work of spiritual theology from a Judeo-Christian perspective, and it contains a tiny bit of my own personal story, which was my own confrontation with childhood leukemia.  I was treated and cured at St. Jude Children’s Research Hospital in Memphis. My remission has been going on for 20 years, will be 21 this April.  And what I wanted to do with this fifth book of mine was to take my expertise in academic spiritual theology and merge it with an experience that I know affects countless persons throughout the country and throughout the world, and that is the confrontation with cancer.

“And what made our book unique here is that most books that address the intersection of spirituality and the cancer confrontation do so from only one perspective.  And what we did in this book was we have three parts in one book, because the sad reality is that persons who encounter or experience a brush with cancer rarely do so only once.  For example, if someone is a cancer survivor, they likely lost loved ones to it, or friends that they met throughout the journey to it. Sometimes, and this is a reality that even still frightens me to this day, cancers can come back, or you can develop subsequent ones because of some of the chemo drugs that may be used, or the radiation that may be used.”

Michael Waters is a Rhodes Scholar and a partner in Jones Walker LLP in Birmingham.  He was also a childhood resident of Cullman, and wrote the autobiographical “Departure Points” to recount some of the stories from that period of his life.

Waters shared, “The book is autobiographical essays about growing up, to a large extent in Cullman.  And I was the son of a very devout Catholic mother and a very devout Baptist father; my dad was a radio announcer here in Cullman, at WFMH.  The first story, what really prompted me to write it, is my dad was a disabled veteran, a paraplegic from the Korean War, but he drove his own car with hand controls, and was very independent.

“The first story I wrote was really about him, but there are stories about my grandparents and some stories into early adulthood, including a brief story when I was legal advisor to Gov. Fob James in his first term, which was the late seventies, 1979-1980.  That’s where the biographical essays end. But the bulk of them are about growing up in Cullman.”

The book’s characters include Big Jim Folsom, whom Waters knew through a stint in a high school rock band with Jim Jr., and Waters’ uncle Vic Geisler, who is a member of the Alabama Auto Racing Hall of Fame in Talladega.