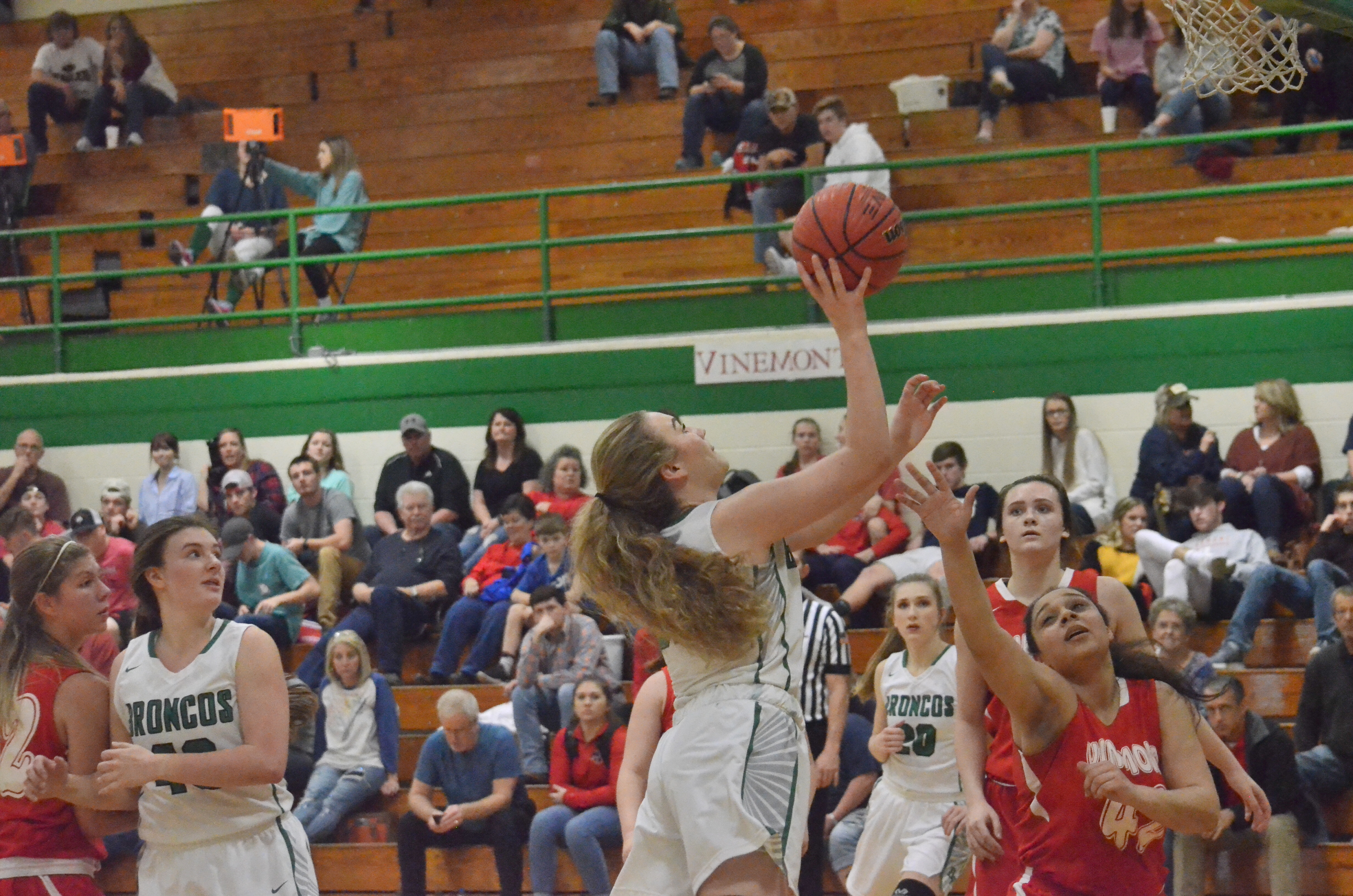 Holly Pond's Maddie Heatherly (32) shoots over a defender during the Lady Broncos' 50-41 win over Vinemont Tuesday night. (Nick Griffin for The Cullman Tribune)

HOLLY POND – Both the Broncos and Lady Broncos hosted Vinemont in the Class 3A, Area 13 Tournament Tuesday night, and both Holly Pond squads advanced to their respective area title games. The Lady Broncos took their matchup 50-41 and the Broncos ended the night with a 74-47 win over the Eagles.

Both sides struggled with turnovers early in this one, making points hard to come by, but a 3-pointer from Maddi Ham in the final seconds of the first quarter gave the Lady Broncos a 7-4 lead going into the second.

A three from Tess Duke stretched the Holly Pond lead to 18-8 midway through the second period, but the Lady Eagles were able to trim it down to 18-13. Another 3-pointer from Ham made it a 23-13 game late in the second quarter and the Lady Broncos maintained a 27-15 advantage at the half.

A layup from Lexi Helton cut the lead to 32-22 midway through the third, but Duke answered quickly with her third 3-pointer of the game to move ahead 35-24. Vinemont ended the quarter on a 5-0 run to make it a 35-29 game at the start of the final period.

The Lady Eagles cut the lead to 35-31 early in the fourth quarter, but a three from Ham put Holly Pond on top 40-33 with just a few minutes to play. Vinemont wasn’t able to get much closer than that, and five free throws from Ham in the final 90 seconds sealed the win for the Lady Broncos.

The loss ended the season at 4-24 for Vinemont and the Lady Broncos will be back in action Thursday night at 6 p.m.

The Eagles and Broncos traded baskets early in the opening period, but a 3-pointer from Isaac Ludwig capped off a Holly Pond run that built a 17-8 lead midway through the first quarter. The Broncos held a 24-15 advantage at the end of the first quarter and started the second on a 10-0 run to stretch the lead to 34-15.

A layup from Vinemont’s Katch Johnson trimmed the lead to 34-20 midway through the second, but a 3-pointer from Parker Sellers in the final minute of the quarter gave Holly Pond a 43-28 lead at the halftime break.

A Kyler Chaney basket put the Broncos ahead 53-38 midway through the third, but two more Vinemont shots, including a 3-pointer from Johnson as the quarter expired, cut the lead to 55-43 at the start of the fourth quarter.

Both teams traded baskets early in the final period, but a jumper from Cooper Jones made it 66-52 midway through the fourth and Holly Pond pulled away to win it 74-57.

Chaney led the Broncos with 18 points, followed by Jones with 15 and Sellers and Ludwig, who each posted 12. Johnson led the Eagles with 27 points in the loss, followed by Will Rhodes with 12 points.

Holly Pond will be back on the court Thursday at 7:30 p.m. to take on New Hope for the area crown.

The season came to an end for the Lady Tigers of Meek Tuesday night after falling to Falkville 40-35 and capping off the year with a 12-14 record. There are a handful of seniors who will be lost to graduation this spring, but the Lady Tigers will still have several familiar faces back on the court next season.

Hanceville trailed by just 12 at the half, but Glencoe was able to create some separation in the third quarter and pulled away to beat the Lady Bulldogs 59-43 and cap their season at 13-11. Hanceville will lose some production to graduation later this year, but a lot of experience will return to the floor for the Lady Bulldogs next season.

St. Bernard was eliminated from playoff contention on the road Tuesday night after falling to the state’s top-ranked 1A team, Decatur Heritage, 79-39. The loss ends the season at 10-12 for the Saints, but with a lot of the roster returning next season, they’ll be ready to bounce back in the fall.

Cold Springs punched its ticket to the Area 12 title game with a 51-27 win over West End Tuesday night, moving it to 16-9 on the season. The Eagles will take on Southeastern Friday at 7 p.m. for a chance to host a sub-regional next week.

The Addison Bulldogs were sent home Tuesday night after falling to Red Bay 75-27, ending their season at 4-15. With just a few seniors graduating for the Bulldogs in May, they’ll be hungry to get back on the floor with even more experience next season.

The Raiders were able to hold off the Aggies 62-57 Tuesday night to advance to the Area 12 title game against top-seeded Oneonta. Fairview’s season comes to an end at 8-15 and Good Hope will travel back to Oneonta Friday night to take on the Redskins at 7 p.m. for the Area 12 championship.

It always comes down to the wire when West Point and Russellville face one other, but unfortunately for the Warriors, they came up just short this time around. The 71-66 loss caps West Point’s season at 12-17 and they’ll say goodbye to some impact players in May, but there are reasons to be optimistic for the Warriors with almost the entire roster returning to the court next season.

The season ended at 18-12 for the Cullman Bearcats after falling to Decatur 50-40 Tuesday night, but with just a few seniors scheduled to graduate in May, they’ll be ready and hungry to go after another postseason run next season.