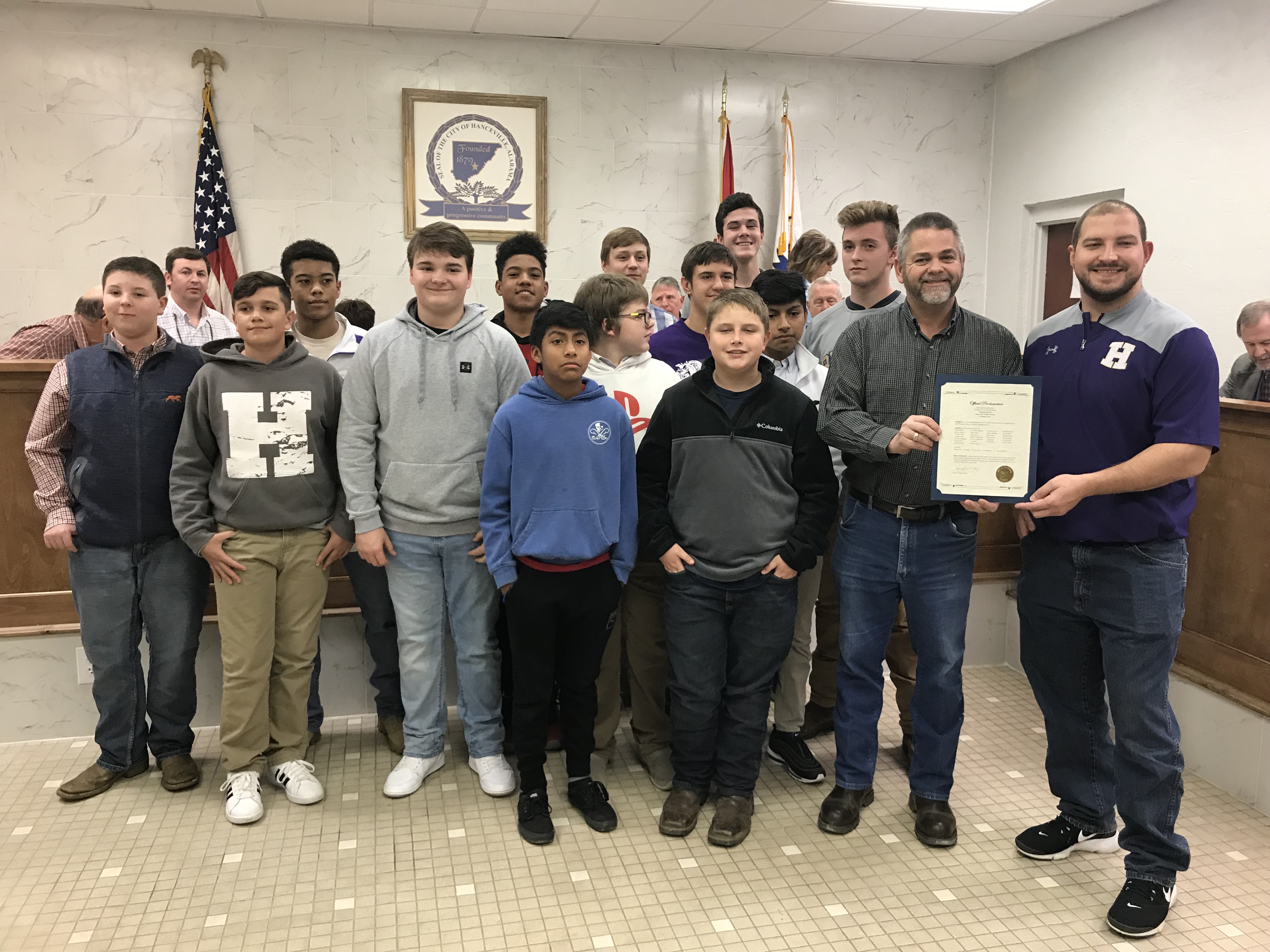 The Hanceville Middle School football team poses for a photo with the Hanceville City Council at Thursday night’s council meeting. (Christy Perry for The Cullman Tribune)

Nail congratulated the team and gave them a challenge, saying, “It’s been several years since the Bulldogs’ varsity team has been in the state playoffs. We want a championship and you can do it. Stay together and work hard and you can do it!”

Daniel Whitfield, the team’s offensive and defensive line coach, was also present as the team and coaches were honored.

He spoke on the behalf of the coaching staff, saying, “These are great young men and great football players. I’m proud of them.”

The middle school Bulldogs finished the season with a perfect record.

The Heritage Archery Club was also recognized. Club members presented a plaque to the mayor and city council to show appreciation for their support. The council has allowed the nonprofit club to practice and recently host an area tournament at the Rayford Talley building.

Joey Skinner represented the club and thanked the council, sharing, “We appreciate your kindness and support for the Heritage Archery Club and enabling us to reach our goal of providing an after-school activity for youth in Cullman County and surrounding area while teaching them the lifelong skill of archery.”

In other business, the council voted to appoint Mike Macon and Buddy Perkins to the Industrial Development Board and reappointed Betty Dover to the Cemetery Rehabilitation Authority.

The City received a check for almost $21,000 for damages to the pavilion at Veterans’ Park that collapsed during a recent storm. The cause of the collapse was bracket failure. The park pavilion will be rebuilt with salvageable material from the pavilion but with double treated 8×8 posts anchored in concrete, thus eliminating the need for brackets. New trusses will also be required in the rebuilding.

Hanceville Parks and Recreation continues to plan concerts and other activities for the summer. On June 8 will be Three on a String in concert. The family-friendly concert will include many more fun activities including climbing walls, food trucks, paddle boats and face painting. More events will be announced later.

Parks and rec baseball, softball and t-ball signups will be on Feb. 8-9.

Nail also publicly thanks the Public Works Department for the excellent work on building, sanding and finishing the new desk in the City’s courtroom.