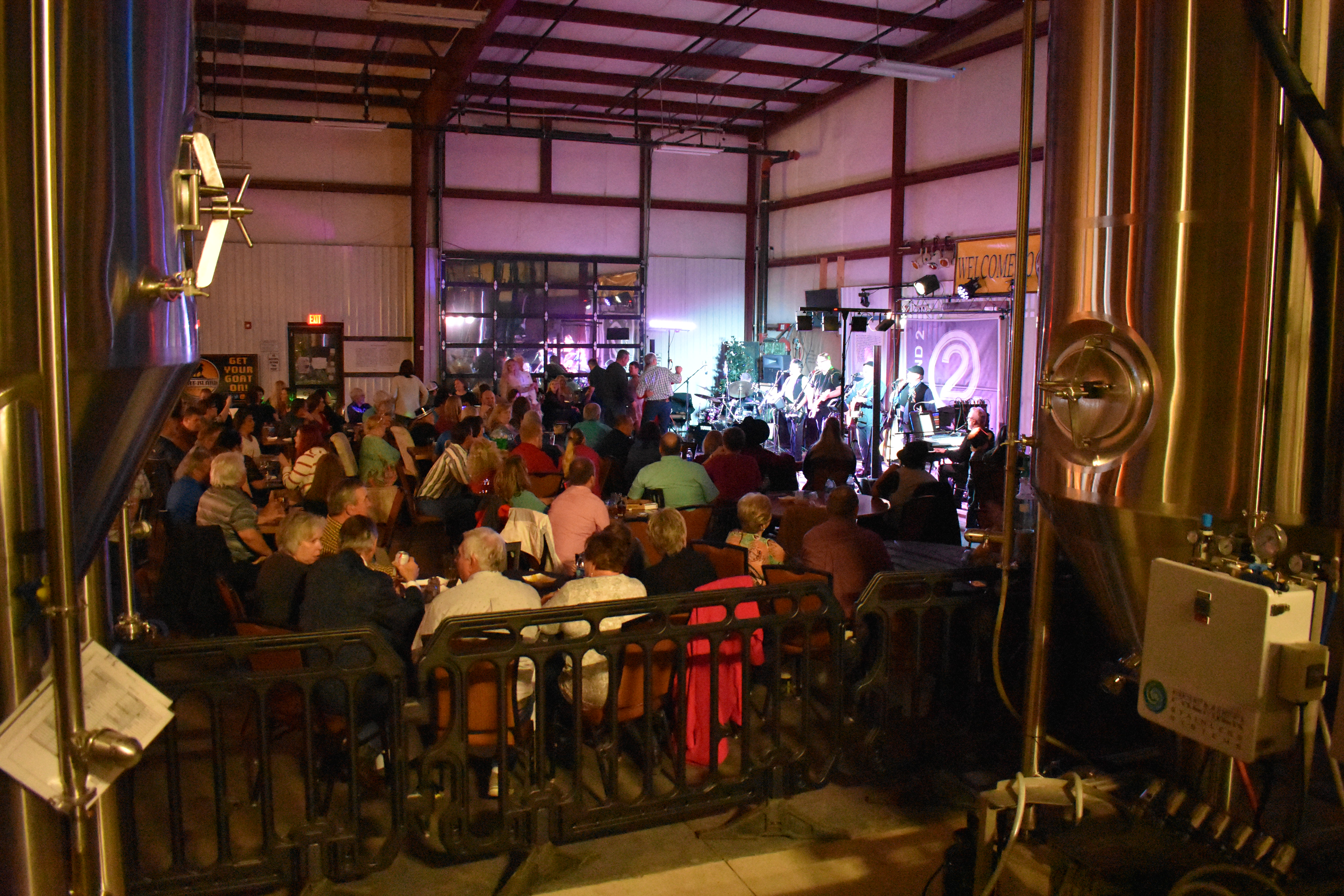 As equipment on the brew floor quietly did its thing, crowds packed the Goat Island Tap Room as Round 2 supplied live entertainment on New Year’s Eve. (W.C. Mann for The Cullman Tribune)

CULLMAN – On New Year’s Eve, Goat Island Brewing was a hot ticket location on Cullman’s south side.  As local band Round 2 played, a large crowd packed the Tap Room. Revelers came and went, but co-owner Brad Glenn estimated the capacity crowd to be from 175 to 200 at almost any time from 7 p.m. until well past 10, and a good number of hardy partiers stayed around to ring in the new year at midnight.

During a break in the music, Glenn talked to The Tribune about the brewery’s experiences in 2018:

“We just are blessed to be, and fortunate to be, in a position in Cullman where we can provide a fun, safe place where people can come out and listen to music, have a few extremely high-quality craft beers, in an environment that’s conducive to relaxing, and have a good time.  We are very fortunate with the clientele that we have, this tends to be a really fun, safe place.

“We consistently hear from people that stop in from out of state–I mean from all over: Oregon, California, South Carolina, Michigan, Illinois, all over–that craft beer enthusiasts drop in, just because we happen to be in their path.  Occasionally they’ll seek us out; you know, they’ve heard about us.”

Goat Island has grown from a hometown favorite to a brand known across the region, thanks to a list of competitive awards and an aggressive, in-person marketing strategy.  A silver medal finish for brewmaster Paul White’s Duck River Dunkel in a European-style lager category at the Great American Beer Festival earlier this year even garnered the brewery some national attention.

“It’s brought some interest,” said Glenn.  “It brought some people that probably wouldn’t have tried the Duck River Dunkel.  And it’s coming along.”

With flavors like Duck River Dunkel and the heritage brew Richter’s Pils, made from an original 19th century Cullman recipe, along with several other brews, the team was caught a little off guard by the booming success enjoyed by the spring to summer seasonal Blood Orange Berliner Weisse.  There’s no jealousy between labels, though; Goat Island appreciates that people find something they like from the selection offered.

Said Glenn, “That was our goal: we want to make something that anybody who likes beer can appreciate.”

Glenn talked about the rapid increase in demand:

“We really just couldn’t produce enough beer this year.  We have several that sell really well in the Alabama market, and beginning in the Florida market, but the Blood Orange has just exploded. That really came about in late spring this year, and we found ourselves in a situation from about May through September into October, where we just couldn’t make enough beer.  There were several brands that we just couldn’t continue to produce, simply because there was such demand for the Blood Orange. I mean, we could have sold a lot more beer, had we been able to provide it.”

In 2019, Goat Island hopes to remedy at least some of that problem with an expansion of its brewfloor that will increase production almost another two-thirds beyond the current capacity.

Despite its growing reputation abroad, Goat Island still wants to be the hometown brewery that opened its doors almost three years ago.

Said Glenn, “We’re community-minded.  We have fundraisers here often; anytime somebody wants to, if we can accommodate them, then we provide a venue for fundraisers.  We like to do that. We supported the sheriff’s rodeo this year with a donation. I don’t even know what the list is, but quite a few other of the 501(c)(3) charities that we participate in.  Anything like that, if we can help, we do. We like to do that.”

What should folks look for from Goat Island in 2019?

Glenn said the team hopes to expand on the success of a cooperative experiment conducted in 2018, of aging beer in used whiskey casks from Opelika distillery John Emerald, then sending the beer-tinged barrels back to the distiller, who will put fresh whiskey in them for beer seasoning.  The small batch of “special edition” Thrill Hill Vanilla produced in 2018 was another of those flavors whose popularity meant rapid extinction, at least until the next round of barrels arrives this coming year.

Said Glenn, “One of the greatest things about being part of the Goat Island Brewing is that the owners and their families and employees are a lot like family.  You know when you get into a partnership, it’s kind of like being married to three more people. So, it’s been a great experience; it’s been a growing, a learning experience.  But it’s also one of the most rewarding of my life. I’m very glad to be part of it.”