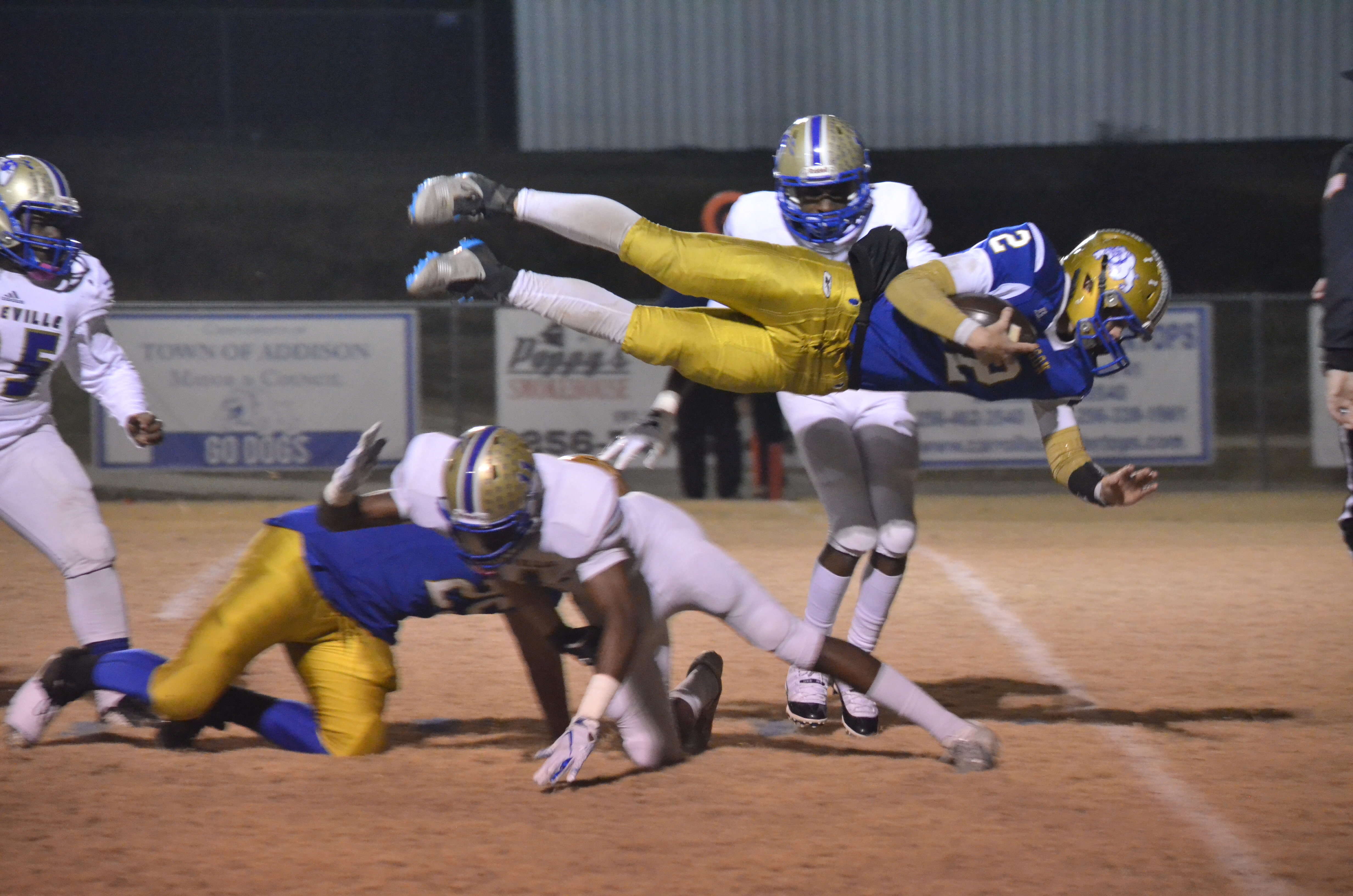 Addison quarterback Zayne Guthrie dives into the end zone for a touchdown in the Bulldogs’ loss to Aliceville Friday night. (Nick Griffin for The Cullman Tribune)

ADDISON – The Addison Bulldogs jumped out to an early lead Friday night, but as the rain began to pick up, so did the Yellow Jackets. Aliceville was able to take the lead before the half, and three fourth-quarter touchdowns propelled it to a 38-22 AHSAA State 2A Football Playoffs quarterfinal victory on the road and an appearance in the semifinals on the road against (13-0) Fyffe next week.

Quarterback Zayne Guthrie put Addison up 8-0 after diving for a 9-yard touchdown to cap off the Bulldogs’ opening possession but the Yellow Jackets responded quickly. On the first play of the ensuing drive, Aliceville running back Zavien Wilkins outran the defense 61 yards for a touchdown. The Bulldogs stopped the Yellow Jackets short on the 2-point try to hold onto an 8-6 lead.

The rain began to fall, and the Addison offense began to slow down. The Yellow Jackets forced a punt on all of the Bulldogs’ possessions for the remainder of the first half, allowing Aliceville to pull ahead in the second quarter. Aliceville quarterback Kavon McGraw put the Yellow Jackets on top 12-6 midway through the second quarter with a 44-yard touchdown run down the far sideline, and Aliceville got the ball back and found the end zone again just before the break.

A pass interference call on the final play of the second quarter set up Aliceville with an untimed down and the Yellow Jackets took advantage with a 7-yard touchdown pass from McGraw to wideout Devontae Wright to make it 18-8 Yellow Jackets at the half.

The Bulldogs were able to cut into the lead late in the third quarter when Guthrie connected with Caleb Crider for a 3-yard touchdown on fourth-and-goal, but the final quarter was all Aliceville. A 2-yard touchdown run from McGraw stretched the lead to 26-14 and a fumble on the ensuing Addison possession set the Yellow Jacket offense up with a short field and a chance to start pulling away. Morris Ball took advantage of the short field for Aliceville, running in another score from 10-yards out to make it a 32-14 lead with just over five minutes to play.

The Bulldogs found the end zone one more time to cut it to 32-22 when Guthrie found his receiver, Brett Smith, in the flat for an 11-yard touchdown, but Addison couldn’t chip away more than that. Wilkins scored his second touchdown of the night from 11-yards out to go up 38-22 with under three minutes to play and the Yellow Jackets were able to hold it there for the final score. Wilkins was the workhorse for Aliceville, carrying the ball 28 times for 192 yards and two touchdowns.

Guthrie accounted for all three of Addison’s scores in the loss, finishing with a team-high 45 yards and a touchdown on the ground while also throwing for two more scores. The Bulldogs’ 2018 playoff run comes to an end in the quarterfinal round, and the season at 10-3,  but with several playmakers returning to the field next fall, the future still looks bright in Addison.