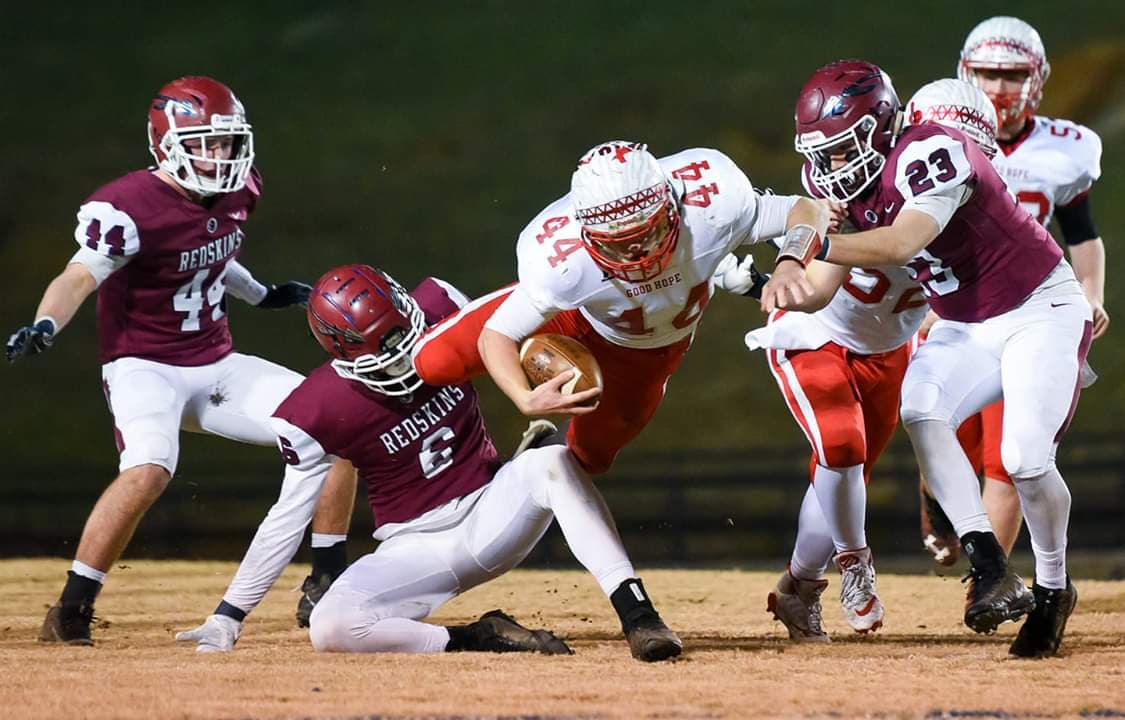 Good Hope running back Matt Dixon fights for yardage in the Raiders’ loss at Oneonta Friday night. (Martha Needham for The Cullman Tribune)

ONEONTA – The Good Hope Raiders came up short Friday night in their AHSAA State 4A Football Playoffs quarterfinal matchup with the Oneonta Redskins, ending Good Hope’s best season in 21 years. The Redskin passing game was too much for the Raiders to handle as Oneonta outpaced Good Hope 29-8. The Raider defense could not find an answer to the Redskins’ screen passes that plagued it all night.

Oneonta started the game strong with a good mix of running and passing as the Redskins marched down the field with an eight-play drive, capped off by a 63-yard touchdown to take the lead. The Raider defense could not get off blocks and looked sluggish on the Oneonta drive.

Matthew Dixon and Bailey Quick got the Raider offense rolling on its first possession as Dixon went up the middle for 11 yards and Quick connected with the big man for 3 yards. Two plays later, as Dixon was running hard, the ball popped loose and fortunately for Good Hope, Jackson Hancock was close enough to pounce on it. The Raiders had trouble holding onto the ball, and after another two plays, Colton Bagwell coughed it up and Oneonta recovered. The fumbles and turnovers haunted the Raiders all night long.

The Redskin offense made quick work on the ensuing possession, taking the ball 51 yards on six plays, but Preston Bagwell made a quick jump on a pass and came away with the interception. The ensuing Raider drive gained 35 yards, all on runs, but faced a fourth-down play. A gutsy fake punt call saw Quick take the long snap at the 41-yard line and shoot to the sideline for a 10-yard pickup to extend the drive. After not gaining much ground, the Raiders had to punt it away.

The Raider defense looked its best on the next outing as it held Oneonta to only 8 yards and forced a punt. After a few runs and a first down, the Raiders recovered their own fumble again only to stall out on a fourth-down pass attempt that fell incomplete.

Oneonta found its rhythm with screen passes and burned the Raider defense all night with them. Luckily, the defense was able force a punt to end the short-pass gashes. Good Hope took over on its own 42 after the punt but fumbled it away a few plays later. Lady Luck was not on the Raiders’ side this time as the Redskins jumped on it for the recovery. Oneonta continued the onslaught of screen passes and drove down the field quickly, punching it into the end zone with five seconds left in the half to extend its lead to 14-0.

The second half picked up right where the first ended with Good Hope struggling to move the ball and having to punt it away. Luckily, Oneonta had the same problem and was forced to punt it away on its first possession of the half. The Raiders took over with great field position at the 33-yard line, but their offensive woes continued. Quick was trying to get something going on an end around option play as he tried to flip it to Dixon but unfortunately it landed right in the hands of a Redskins safety. The team from Blount County quickly punched it in after a 45-yard scamper and a 2-yard screen pass. The 2-point conversion was good as the Redskins extended their lead to 22-0.

The next four offensive outings ended in either punts or turnovers on downs. At the beginning of the fourth quarter and right after the last Raider punt, Oneonta drove in the final nail as the Redskin tailback broke four tackles on his way to a 30-yard touchdown run to stretch the lead to 29-0.

As the offense hit the field, Good Hope called 15 straight run plays and go 72 yards to prevent the shutout. A successful 2-point conversion set what would become the final score at 29-8. Oneonta turned the ball over on downs on the ensuing possession, only to see Good Hope throw a quick interception, allowing the Redskins to take a knee to end the game.

The Raiders ended up giving up 372 yards of offense against the Redskins. Dixon ended the night with 17 carries for 107 yards. Quick ended up with 10 carries for 31 yards and went 4-of-12 with 22 yards passing and two interceptions. Good Hope had four turnovers on the night.

Good Hope’s 2018 playoff run comes to and end, and the Raiders’ season, with an 11-2 record. The Raiders collected 11 wins this season, more than they have been able to collect in the last three seasons combined, propelling them to the quarterfinals of the AHSAA State Playoffs for the first time since 1997.