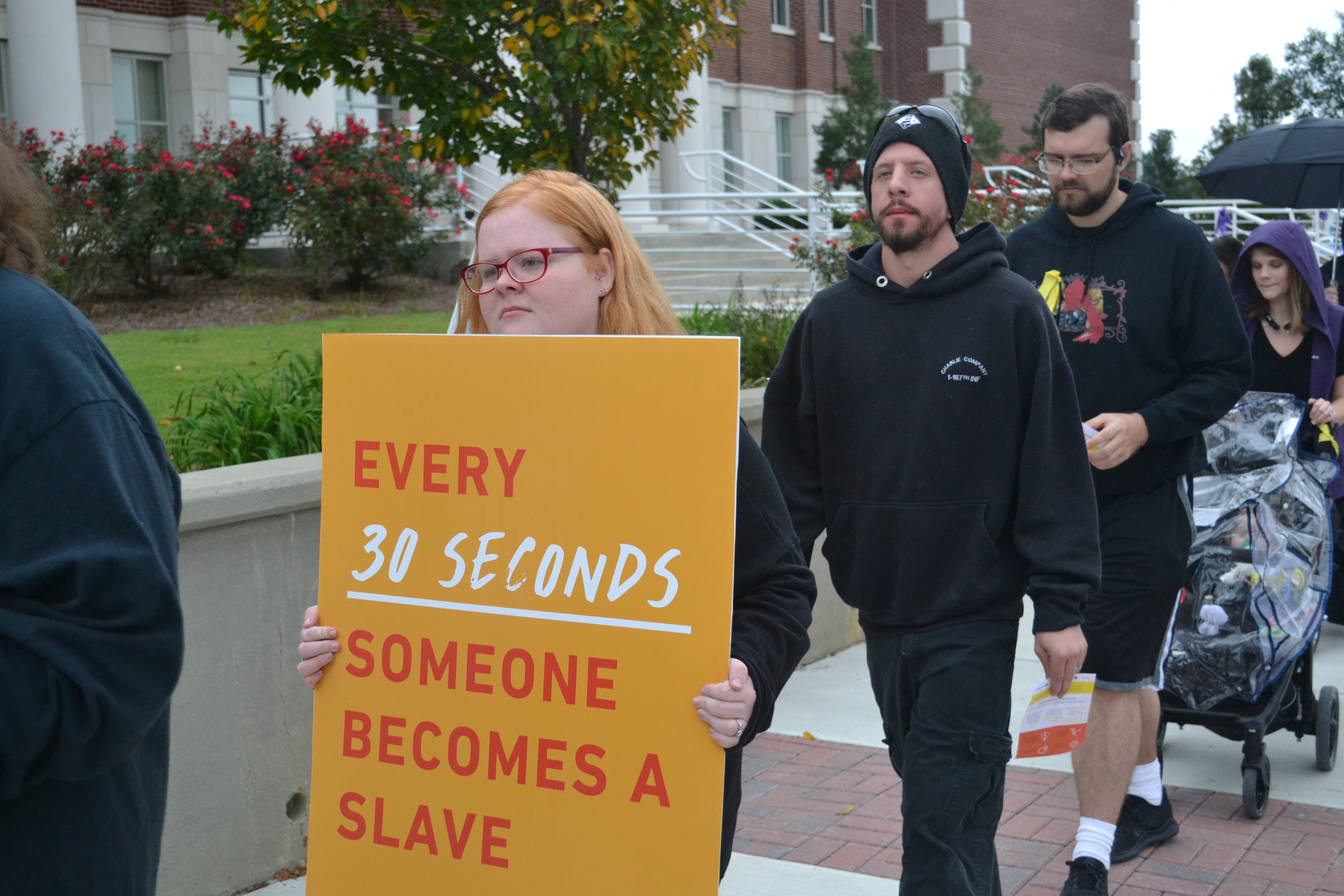 CULLMAN – “This is a silent walk, we’re walking for those without a voice,” this year’s Freedom Walk organizer, Stephanie Wood, said to those congregated at the Cullman County Courthouse Saturday morning. The group walked for the A21 Campaign, a nonprofit, non-governmental organization whose mission is to fight human trafficking. A21 was founded in 2008 by Christine Caine and has a global presence. The organization has many strategies to fight against human trafficking “through awareness, intervention, and aftercare.” Saturday’s Walk For Freedom took place across 50 nations and 450 happened that day.

Shared Wood, “I think it is absolutely awesome that Cullman gets to be a part of something that is so large; Cullman can be a small town, but we are getting to be a part of a global walk, and I just think that’s huge. A lot of people think that human trafficking does not affect Cullman County, but it does, and it doesn’t matter if your family is impoverished or rich, human trafficking touches everyone.”

She continued, “Whether you’re a victim yourself, or if you’re not a victim you may find some you know may have experienced trafficking. I just think it’s so amazing that we get to be a part of it (the walk) and I hope that people walk away today more aware of their surroundings, more aware of what’s happening right here, and just be moved to do something and not just sit on the sidelines; now that they have that knowledge, take a step: donate to an organization that is doing something, make a phone call if they see something is off, just that they would be empowered to make a difference.”

Walkers can raise money and were encouraged by A21 to donate $100 to the campaign. The fundraising ends in October. Walkers carried signs with key statistics about people who have been victims of the horror of human trafficking.

There were several speakers before the walk started. In addition to Wood, Cullman County Sherriff Matt Gentry and special guest speaker Charity Pittman spoke to the gathering.

Pittman gave a personal testimony about how human trafficking deeply affected her life, being subjected to it by a family member, but said, “I am not a victim of human trafficking, I am a survivor!”

Attendees walked in a single-file line down Highway 31 in front of the courthouse, in silence, “for those who don’t have a voice.”

What is human trafficking?

According to the Alabama Criminal Code, Section 13A-6-153:

(a) A person commits the crime of human trafficking in the second degree if:

(1) A person knowingly benefits, financially or by receiving anything of value, from participation in a venture or engagement for the purpose of sexual servitude or labor servitude.

(2) A person knowingly recruits, entices, solicits, induces, harbors, transports, holds, restrains, provides, maintains, subjects, or obtains by any means another person for the purpose of labor servitude or sexual servitude.

(4) Any person who obstructs, or attempts to obstruct, or in any way interferes with or prevents the enforcement of this section shall be guilty of a Class A misdemeanor.

(b) Human trafficking in the second degree is a Class B felony.

Earlier this year, The Tribune reached out to Kathy Wilson, the chair of the Cullman County Human Trafficking Task Force for her definition:

"Human trafficking is defined as modern day slavery and involves the use of force, fraud or coercion to obtain some type of labor or commercial sex act. People often confuse trafficking with human smuggling, which involves movement of persons. These are not interchangeable terms. Smuggling is transportation-based and trafficking is exploitation-based. I wish the language could be changed to 'Human Exploitation.'"