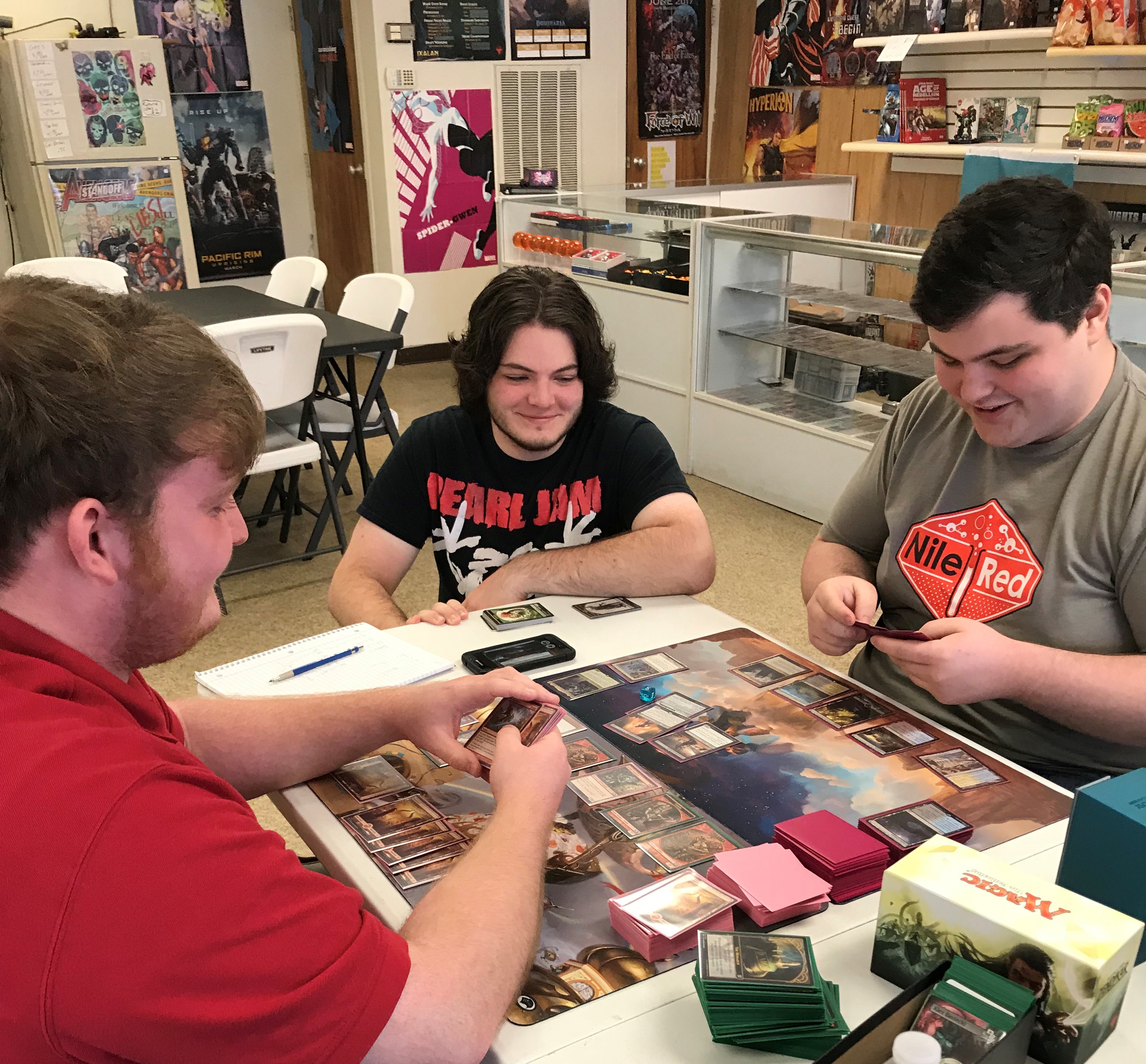 Guests play Magic the Gathering at Valhalla Comics and Collectibles in Cullman. (Christy Perry for The Cullman Tribune)

CULLMAN – Valhalla Comics and Collectibles, located at U.S. Highway 278 and Main Street (1108 Fourth St. SW), hopes to give all gamers a place to meet and have a fun time. It is much more than a comic book store.

One of the three owners, Derek Nilsen, spoke with The Tribune about the store and his future goals. Nilsen along with two friends, Thomas Bonds and Casey Lewis, bought the store on March 1 after the previous owner passed away.

Nilsen explained, “The three of us worked together and we all enjoyed playing games, so we bought it. Thomas and Casey work full-time at other jobs while I run the store.”

Nilsen was first introduced to the Japanese series Yu-Gi-Oh! while in his early teens. He recalled, “(We) didn’t have much to do growing up. We started playing Yu-Gi-Oh! We spent a lot of time playing. I stopped for a while but started playing again at a more competitive level.”

While the name is Valhalla Comics and Collectibles, games are the main focus of the business, and while the store offers many fantasy-based games, Yu-Gi-Oh!, Pokémon and Magic the Gathering remain the most popular. Players of these three games can compete in weekly tournaments held at the store.

Nilsen said, “Players of all games are welcome to come play. We have several groups that meet here for a good place to hang out with friends. They mostly play Magic, Yu-Gi-Oh! or Pokémon but we also have D&D (Dungeons & Dragons) groups that come.”

Valhalla is next door to Shell Station/Subway and Rumors Deli is across the street. Nilsen points out, “This is a great centralized location and players can easily walk for a snack and a drink to have while they play. We have a very safe location that has a regular police presence so it’s an ideal location and place for friends to gather.”

The store can seat up to 56 players at several tables set up for game play. They have packs of cards and accessories available. Special cards are also available. Valhalla carries many specialty Japanese snacks including Pocky and Hello Panda cookies. It's a great place to find gifts for lovers of anime, comics, custom canvas art and games. An extensive variety of strategic tabletop games are available including the Munchkin series.

On Saturday mornings, all ages can participate in tournaments from 10 a.m. – noon. “Pokémon Professors” are on hand to help teach the game to new players. If you don’t have cards, don’t worry.

Nilsen said, “We want to build the games and we want everyone who wants to play to be able to participate. We have already built decks for players to use.”

The business is transitioning its focus to expand gaming.

Nilsen explained, “The comic industry is still huge, but it is all digitized now so the demand for printed comics has decreased. We will likely phase out the comics and add more games. We have a big screen with gaming systems in hopes of having tournaments. We also have arcade games. We would love to begin hosting larger regional tournaments of the main games. Those events can bring in lots of people and revenue for the city. The games we play are fun, competitive, strategic and little bit of luck.”