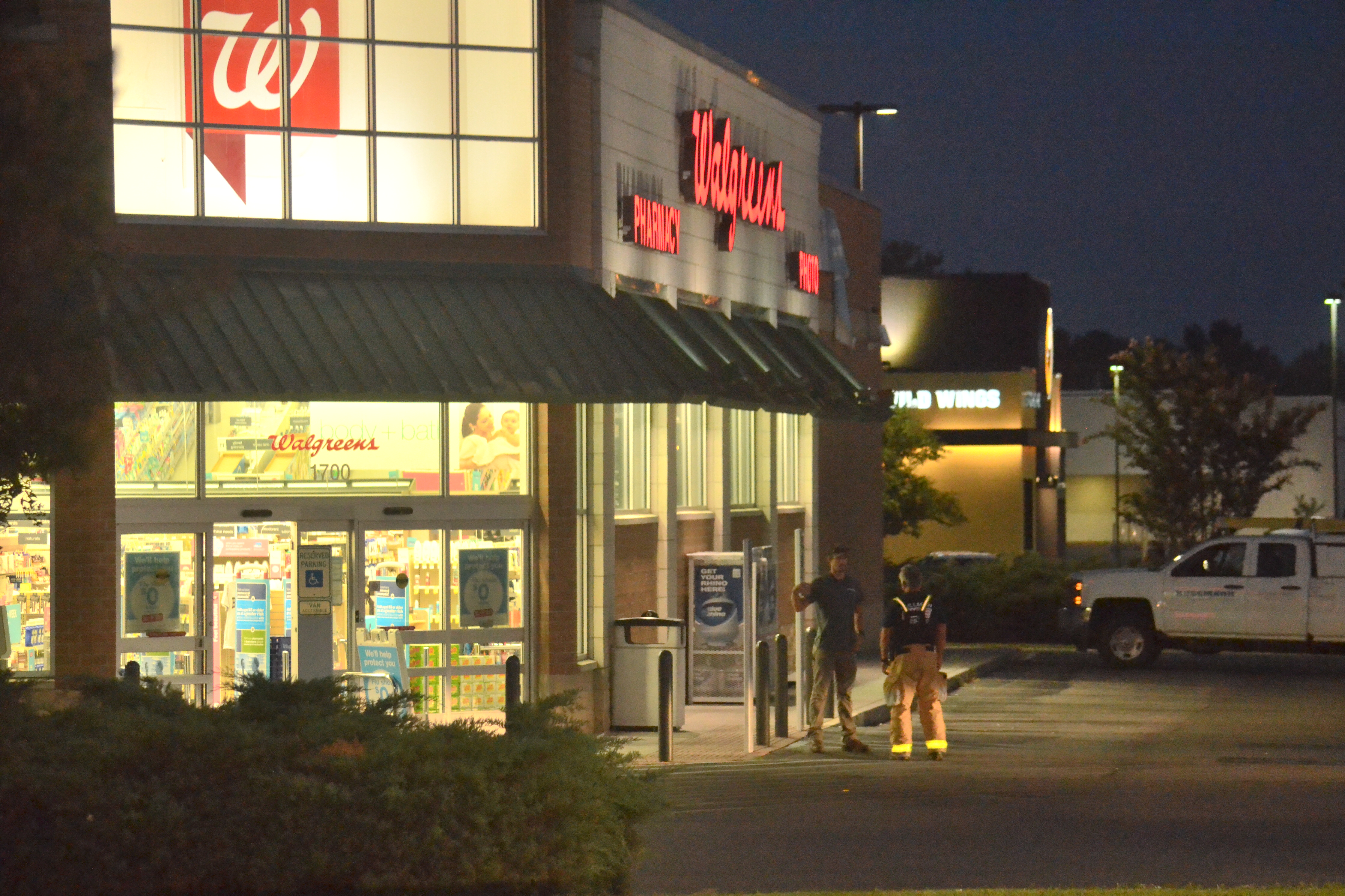 Firefighters stand outside Walgreens in south Cullman Sunday night after six people were taken to Cullman Regional for what was believed at the time to be hydrogen cyanide poisoning. It has now been determined there was no cyanide, but instead a form of freon. (Nick Griffin for The Cullman Tribune)

CULLMAN – The Walgreens at 1700 Second Ave. SW and King Edward Street in Cullman was closed early Sunday evening after a refrigerant leak sent employees and two firefighters to Cullman Regional due to exposure to what was originally identified as hydrogen cyanide. Authorities have now determined there was no poison gas in the store.  Instead, the culprit was a hydrochlorofluorocarbon (HCFC), a form of freon, which has a chemical signature similar enough to hydrogen cyanide to have registered on gas meters being used by responders from Cullman Fire Rescue. HCFC exposure can even cause similar symptoms but is not poisonous.

Cullman Fire Rescue Operations Chief Darren Peeples explained: “We responded to a strange odor, smell of gas, unknown odor, and when the crew got there, some of the patients were already having signs and symptoms such as dizziness, headache, light-headed, nausea, elevated heart rate.  And so a couple of the guys were treating one or two of the employees, and then our guys went inside. And we have gas meters that detect certain gases, and as they got in the cooler, the meter went off, detecting hydrogen cyanide."

Peeples continued, “So, at that point, they evacuated the building and began looking up the information on hydrogen cyanide.  They contacted me, and while I was en route to the scene, they had the information on hydrogen cyanide, and every single one of the symptoms they had was consistent with hydrogen cyanide poisoning.  So the medical director was contacted, Dr. Scott Warner, and he met me at the scene. We started evaluating patients. Well, based on what the meters said, based on signs and symptoms, we treated it as cyanide poisoning because we could not identify what the product was or where it was coming from.

“Fast forward 30 or 40 minutes, after we’ve sent people to the hospital, including two of my crew; the air conditioning guy got there and went on the roof–did not go in the building–to check the units, and found that one of the units’ freon did have a level drop in it.  It was R-22 (freon).

“R-22 is HCFC.  So its signs and symptoms of breathing that or being around that product when it’s leaking are identical to hydrogen cyanide.  So they have very similar signs and symptoms. The difference is hydrogen cyanide is a poisonous gas, and the way it attaches to the molecules in the blood in the body is what causes the problems, versus the HCFC.  It (HCFC) is an asphyxiant. So what happens is you become hypoxic (low oxygen level in the blood); that’s why you get light-headed, people who are sensitive when they’re dizzy, they become nauseous.

“So it mimicked the same symptoms, but it was simply a freon leak.  It will make you light-headed; if you stay in the environment too long, you will suffocate because it displaces oxygen.  But it is not a poison; it is an asphyxiant.”

In a better-safe-than-sorry scenario, the gas meters used by Cullman Fire Rescue sounded the warning on a chemical signature that fell within the same general spectrum as hydrogen cyanide.

HCFC, according to Peeples, appears to be “within the hydrogen spectrum that hydrogen cyanide is in.  So when it (the gas meter) picked up that spectrum of the hydrogen, it immediately just reflected that within the meter.  There again, if I understand how the meter works, it works obviously within a spectrum of several chemicals.”

Even though it is non-poisonous, prolonged exposure to an asphyxiant can still be deadly by replacing oxygen in the lungs and blood with other gases.  Both evacuation and medical exams for those showing symptoms were safe moves under the circumstances, while identifying the gas as non-poisonous made for an easier resolution to the incident.

“Obviously, they didn’t need to stay in that environment,” said Peeples.  “Once we identified what the leak was, we were able to then backtrack and go, ‘Okay, signs and symptoms the same, this is consistent. There’s no other reason for the signs and symptoms,’ which made remediation of the store a lot simpler also, because they didn’t have to (decontaminate) the entire store.”

All the patients were treated and released Sunday evening.

Cullman Fire Rescue Chief Brian Bradberry said, “Dr. Warner our medical director responded to the scene to assist us. Under Dr. Warner's advisement the Walgreens employees were sent to the hospital for evaluation as a precautionary measure. We also sent two of our firefighters to the hospital to be evaluated as well.”

The store has now re-opened.