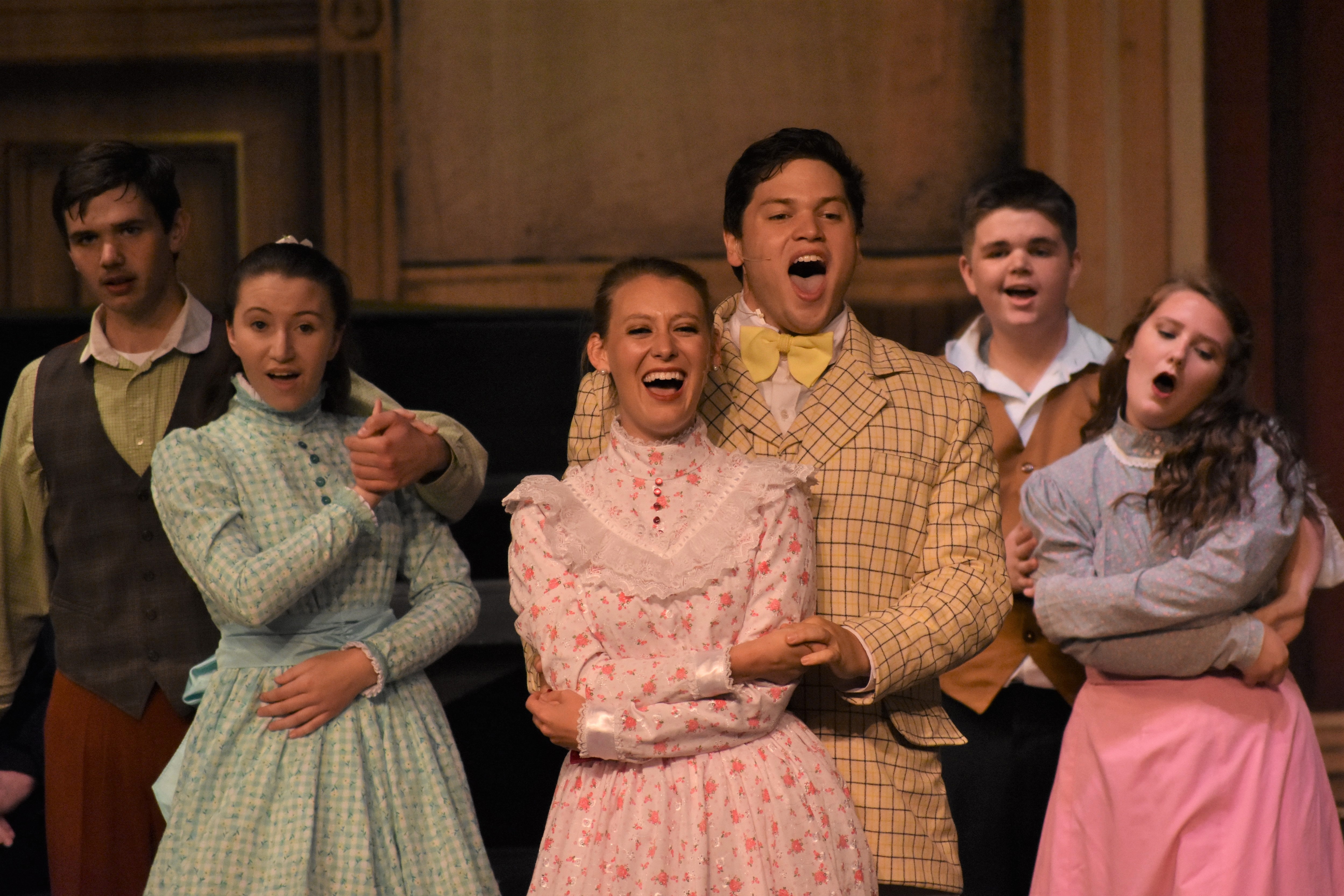 CULLMAN – After a hiatus of many years, the Cullman Community Theatre (CCT) returned to town Saturday with a production well known to fans of the group’s previous run.  CCT put on “The Music Man” in the 1980s, and members of that cast were present for the opening of the revival at an afternoon matinee of the same show at Cullman High School’s auditorium.

“It’s been kind of something we discussed for a long time, about establishing community theater in Cullman again.  It existed in the ‘80s in a really strong way. We felt like it was a real important need in the community, so we got together back in May, with the effort of doing a summer show.

“Parks and Rec (Cullman Parks, Recreation, & Sports Tourism, CCT’s sponsoring organization) has been instrumental in that, helping us, kind of being the base organization to help us get this going, get this off the ground.  And so, that’s been a helpful thing. And then, Cullman City Schools has been instrumental in helping us, as well. They don’t sponsor it–it’s not their event, but they are working with us about facilities and working with the auditorium and everything, so it’s been good.

“We had auditions in June, and then we started working immediately.  We worked all summer. And we had about 70 people that were cast in the show, anywhere from 4 to 70-something years old, and so it’s all different ages.  It’s been a great cast: a lot of really wonderful people. I’ve really gotten to know a lot of people that I had not known before this. And I think most of them would tell you that it’s a great experience to get to know people that you would never know otherwise, because you get involved in something like this.

“Great work from Cindy Pass, who is the music coordinator for the show; and Melva Jackson, who’s helped me with directing and assisted me, and then also has done a lot of other things.  She has a real strong theater background, and she knows costuming, she knows acting really well, so she has helped me a tremendous amount in this. So we’ve just worked as a team. Noah Carpenter has been our tech guy, and he’s helped us establish tech crews and establish the direction of the technical aspects of the show.  And so, we’ve had a great team and it’s been a great experience.”

Technical Director Noah Carpenter said of his team, “We’ve got all the kids backstage, and my job is the easy job.  I just stand up there with my headset on, and I tell them what do, but the team is what’s really putting it together and making it happen.  The whole show could not run without them.”

“It’s been fun for us, you know,” said Cook, “and it’s the beginning of what I hope will be continued community productions, because it gives opportunities to everybody in the community, all ages.  A lot of people who are in this show have reminisced about their high school years or years when they were kids and they were in theater. They talked about they brought it back, and they never thought they’d get to do it again.  That’s what community theater does: it gives people an opportunity to continue something that they love.

“People love to play a sport, and they get to do it the rest of their life, like golf or tennis.  Well, people love theater; they want to do it when they get older. And so it gives an opportunity for those people.

“And one of the things I’m really proud of is that it gives an opportunity to our teenagers who are in my program at the high school, to have another performance opportunity.  They don’t have to go to Birmingham or Huntsville or Decatur, something like that, to do that. They can do it right here in their own hometown, and it makes it a whole lot more convenient.

“It was just needed in this community.  And there’s still a lot to do to get it really going and to make it established and funded, but we’ve made a great start.  And I think there’ll be additional steps made after this. I know Parks and Rec seems to be in it for the long haul at this point, for now, until it can spread its wings.  So it looks like they’re not running off on us after the first show. I know we probably scared some of those people to death with some of the things we’ve done to get ready for this, you know, but it’s been good to work with them.  And (Principal) Kim Hall at the high school has been very supportive and encouraging to us. I’m very happy with how it’s turned out.”

Cook said he will concentrate on theater programs at Cullman High School during the school year, but that we might still see CCT at work with some of its other staff leading productions.