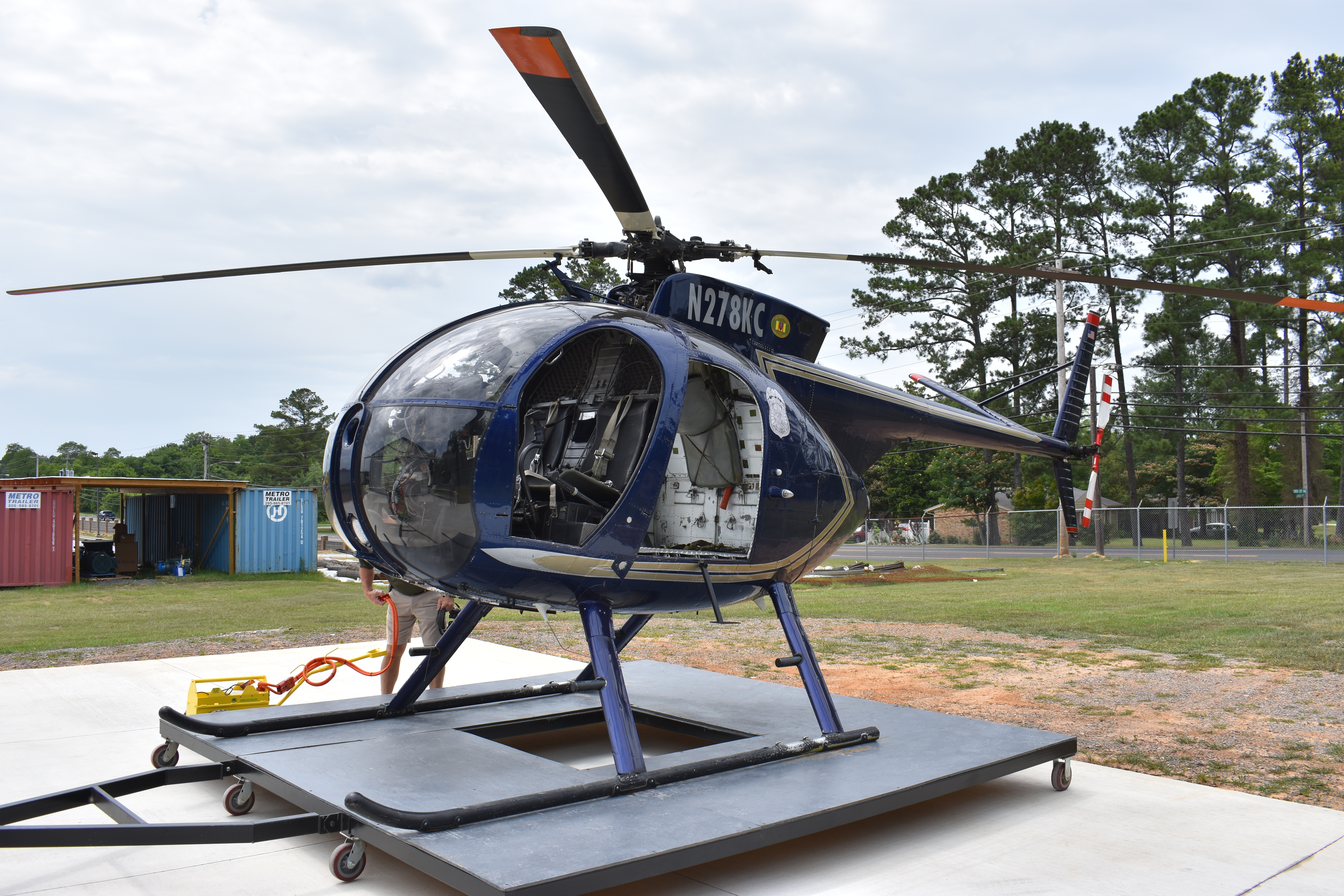 The Hughes 369A/OH-6A Cayuse, known to Vietnam veterans as the “Loach,” was designed to be a highly maneuverable light observation helicopter. (W.C. Mann for The Tribune)

CULLMAN –  The Cullman Police Department (CPD) has a resource that is rare among law enforcement agencies in cities its size: an aviation division.  From hangers adjacent to the city water plant and at Cullman Regional Airport, helicopter pilots and observers fly missions as needed to provide air support during searches for fleeing suspects, act as aerial observation platforms for security operations at events like Rock the South, and serve as really cool community outreach tools, among other things.

Lt. Danny Hite, who is preparing to retire, has served since the 1990s as pilot and head of the division, and Patrol Officer Matt Dean flies the department’s second helicopter and is managing the division during Hite’s departure.  Lt. Gene Bates is currently going through the process of getting his commercial rotary wing license. All three got their private helicopter certifications through Wallace State’s rotary wing aviation program, with further training toward commercial certification at other schools.

On Wednesday, Dean and his helicopter helped The Tribune conduct an aerial photographic survey for an upcoming story, and we took the opportunity to sit down with the pilot and talk about what he and the aviation division do.

By the way, if you’re a gearhead, Dean’s office/workshop is a little slice of Heaven.  When not flying, he also drives the department’s Harley-Davidson Electra Glide motorcycle, and the department’s classic black and white Road King sits in the shop near the boat he drives as lake patrol officer at Lake Catoma and the Duck River Reservoir.

Dean said with a big smile, “I’d say I’ve got the coolest job around this place!”

Helicopters are expensive pieces of equipment, easily beyond the budget of a small city department like Cullman’s.  Dean explained that CPD’s vehicles, along with non-flying helicopters acquired for their usable parts, have all come to Cullman through the federal government’s 1033 program which allows the cost-free transfer of certain military resources to law enforcement and emergency responders.

Said Dean, “Not many departments our size have aircraft.  If it wasn’t for the surplus property program, there wouldn’t be any way we could have the aircraft we have.  We’ve got over a million dollars’ worth of aircraft.”

The JetRanger, in one variant or another, was flown by the U.S. Army from 1969 until 2017.  It has also been immensely popular in the civilian sector, as a law enforcement patrol vehicle, air ambulance, aerial news media camera and observation platform, and corporate executive transport vehicle.  CPD’s JetRanger is equipped with forward looking infrared (FLIR) thermal imaging cameras and a Nightsun high intensity spotlight; it has two rear seats.

According to Dean, the JetRanger, with all of its specialized equipment, is larger and heavier than the Loach, with a similar engine, meaning that the JetRanger, even with its back seats, is mainly a two-person platform.  Hite has been the pilot since the CPD’s acquisition of the vehicle in the 1990s.

The Loach entered Army service in 1966, and variants remain in service today.  It was used as a nimble, highly maneuverable scout and observation helicopter in Vietnam.  The CPD’s Loach is itself a Vietnam veteran with more than 1,000 combat mission hours in the war.

Dean pilots the Loach.  Where the CPD’s JetRanger has bells and whistles, this is a stripped-down hotrod: no back seats in a small cargo compartment, no spotlights or imaging (though Dean has night vision goggles to use when needed).  Keeping things as light and simple as possible, the pilot often dispenses even with the doors.

The no-frills Loach can carry tactical or medical personnel in its cargo bay and is even used in training exercises as an aerial shooting platform for snipers.

What do the helicopters do?

Dean makes an average of two flights per week, with a total of nine flights in May.  On average, CPD aviation answers 40 to 60 calls per year for assistance from outside agencies.

“You know, we’re lucky we have a chief that backs us,” said Dean, “have a city that puts money in a budget to help maintain aircraft.  I know we have other departments that are thankful that we come to help them, and I think that means a lot, too, in the grand scheme of keeping us going.

“We couldn’t do it without our chief, and without the mayor and council supporting it.  You know, I think it’s a really good program, and our chief would back me up on this: that I think it’s an asset to other departments in our area.  I hope we can continue and see some of the advantages of having the aircraft, for us and for our community.”

Dean and his Loach took us up for an aerial survey and photo flight that was exciting, occasionally mildly panic-inducing (Banking without doors at 2,400 feet takes getting used to!), and at all points skillfully and professionally conducted.  We offer our thanks to him and the CPD. Look for those photos in another story coming soon.