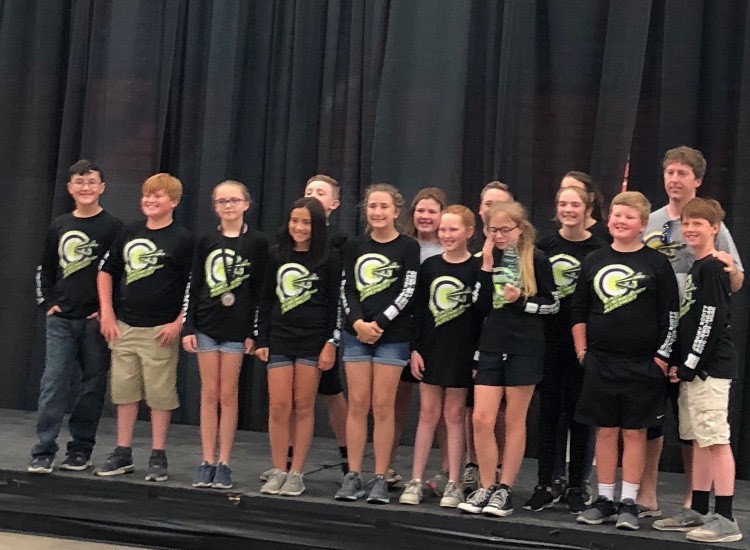 The East Elementary archery team finished in third-place in the Bullseye shoot at the NASP World Tournament in Louisville over the week. (Photo courtesy of Jordan Whitlock)

CULLMAN – The East Elementary archery squad brought home third place in the Bullseye shoot at the National Archery in the Schools Program (NASP) World Tournament in Louisville over the weekend thanks in part to some standout performances and a total score of 3,215. Cullman Middle School and West Point High School also competed in this year’s Bullseye event at the World Tournament, finishing in 24th place and 38th place in their divisions, respectively.

East Elementary and Cullman Middle School posted big scores in the International Bowhunting Organization (IBO) 3D shoot as well, with Cullman Middle’s Will Bolzle finishing first among all sixth graders and seventh overall in the middle school division. Bolzle’s performance helped lead CMS to a score of 1,670 and a seventh-place finish in the event. East Elementary’s Ava Ray also stood out among the pack during the IBO 3D Shoot, helping to lead East to a fifth-place finish after posting a 281, placing her third amongst all elementary shooters and second among fifth graders. Vinemont Elementary’s Kayden Henderson captured third place in the 3D Ministries Shoot with a score of 275. Henderson’s score put him at first place among all fifth graders and third place in the Elementary division overall.

Vinemont Elementary head coach Josh Drake had high hopes for Henderson going into the season, but he didn’t anticipate making a trip to the world tournament.

“He shot well last year as a fourth-grader, but this year I expected big things from him. He didn’t really find his groove until we went to state; that’s when he really found his groove and kind of progressed from there. He finished third at nationals and qualified for the world tournament,” Drake said. “I thought he would do well this year, but I didn’t know if he’d get that high. I knew coming back that he was probably going to be one of our top archers, but archery is such a mental game and people don’t really realize that. So, it really started clicking for him after state and he found his groove and he really started becoming an archer. He had the ability all year, it was just a matter of it clicking for him.”

Henderson will move on to compete at the middle school level next year and Drake is excited to see him continue to grow as an archer.

“He’s just got to continue to grow mentally. He can get there, but he just can’t get in his head. You can’t always shoot your best, it’s just like life,” Drake said. “There’s ups and downs in archery and there’s going to be ups and downs in life and you have to overcome the low points. You’re not always going to out there and throw up a 288 or a 290; you have to overcome errors.”

East Elementary head coach Branch Whitlock was impressed with how his squad scored on Saturday, especially considering they didn’t have a full roster of archers on the trip.

“After nationals it’s a little difficult to get the buy-in from the entire team to attend, so we actually went kind of short handed with 16 kids and it’s hard to compete when you don’t have a full 24,” Whitlock said. “So, if you had told me at the beginning of the year that with 16 kids we could finish third in the world, I would’ve been happy with that for sure.”

Whitlock is the head coach for Cullman Middle School’s archery team as well and since he couldn’t always be hands on with the older unit, he credits the middle school squad’s development to his assistant coach Doug Johnson.

Whitlock took a few moments to reflect on some of his team’s individual standouts and talked about their development throughout the season, starting with fifth-grader Ava Ray.

“Since the very first day that she joined the team she’s just continued to improve and works hard every day, stays focused all the time, and I knew coming into this year that she was going to be a really good archer,” Whitlock said. “She just continued to work hard every single day and had a really good tournament at nationals then continued that at the world tournament and really kind of carried our team throughout the events.”

“Will, ever since day one, has been a really good archer and at some point, kids seem to plateau and once that happens they can either take a big drop or continue to get better and Will plateaued like most kids do and instead of getting discouraged by that, continued to put in the hard work,” Whitlock said. “He finally made the jump we’ve been expecting him to make and taking that next level to being one of the best archers in the world and the top archer in all of sixth grade, so that’s really cool for him to be able to make that kind of a jump.”

Fifth-grader Brinley Hurt was another young archer who came to mind for Whitlock. When he first began coaching archery, Whitlock said, he learned about the pressure that can affect kids during competition and he was proud to see Hurt rise above that during the year.

“I’ve always been a basketball guy and when I got to East they asked me to coach archery and I learned as much as I could as fast as I could and one thing I learned is that archery is probably the most individually stressful sport that I’ve ever been part of. It really takes a toll on kids emotionally and mentally to where sometimes they can have panic attacks and it just really stresses kids out,” Whitlock said. “What happens is kids start off and they’re just excited to get good. Once they get to a high level, that expectation is there for them every day. Brinley was one of those kids that got to a certain point where she was pretty good and then the stress hits and you kind of dive a bit, but by the end of the year she was one of the best we had, just doing a great job. She finished toward the top and I’m super proud of her for bouncing back after she kind of dropped a little bit.”

Whitlock has been very happy to see the results at the elementary level over the years and is excited to see his archers ride that momentum into middle school competition.

“Every year I think to myself, ‘This is the best group of elementary kids I’ve ever had,’ and I’ve thought that for about three years in a row and we keep putting groups like that into middle school every year and it finally paid off this year at the middle school with the state championship. We had enough kids to carry over and continue the tradition at the middle school level. Now we’ve got back to back-to-back state championship teams that have come through the elementary level so sixth-, seventh- and eighth-grade will be three groups that have all won a state championship,” Whitlock said. “The expectations are very high for the middle school group going forward and I think obviously they’ll have a great chance to compete at the state level but if there’s ever a time for a group to step up and challenge at the national level, next year could be it. That’s me putting a lot of pressure on the kids and expectations, but I think the teams out of Kentucky and Louisiana that are getting it done every year have those expectations as well.”

It’ll be a challenge replacing such a talented group at East Elementary next year, but Whitlock is confident that the culture and support around the program will help keep the winning tradition alive.

“Actually, next year will probably be my most difficult task as far as trying to continue the tradition of being a great archery team. I lose almost my entire team on elementary; I think we might have six kids coming back, three that were competitive at the national level. So, it’ll be a big challenge for us moving forward and really, it’s a challenge every year because of the turnover every year. I think you hope every year that you can bring back eight or 10 from fourth grade to fifth grade but this year my fifth-grade group was so strong that I wasn’t able to carry as many fourth graders as I normally do. It will almost be a complete rebuild for next year, and with the expectations as high as they are for our team, it’ll definitely be a tall task to continue the success, but the good thing about it is that I coach at a great school,” Whitlock said. “We have great kids, really intelligent kids that work hard all the time so there’s no doubt that we can be competitive if they’ll just get in and put in the work. My principal, Mr. (David) Wiggins gives me and our team every opportunity to be successful, from allowing us time to practice to making sure we have the best equipment all the time. That’s definitely a blessing for the kids and for myself as a coach.”