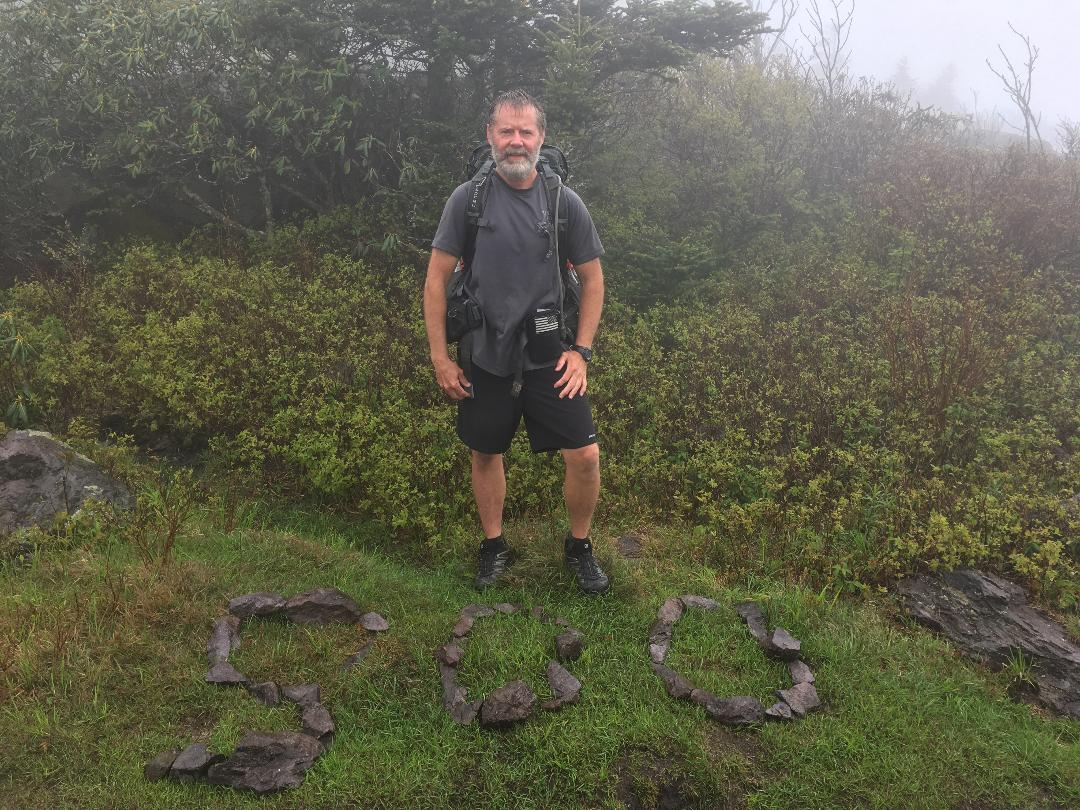 FAIRVIEW – When decorated combat and special operations veteran Col. Donald Fallin retired from the United States Army in 2016, he wasn’t giving up his life of adventure.  He was just changing shoes, trading his combat boots for the hiking variety. At Springer Mountain, Georgia on March 27, Fallin started up the Appalachian Trail on a mission to raise awareness and money for the Johnny Mac Soldiers Fund, an educational fund for veterans and military families, with a special emphasis on serving the children of soldiers who have given their lives in service to their country.

The colonel completed 534 miles on the trail before pausing to return to Fairview for his nephew’s graduation.  After the ceremony, he will return to Marion, Virginia to pick up where he left off. While he was “in the neighborhood,” The Tribune caught up with him to find out more about what he’s doing.

“I was just about to enter the job market, and it just didn’t feel like it was the right thing to do,” said Fallin.  “And I was wanting to do something to try to give back, so I talked with Rep. (Randall) Shedd about a couple of things, and he had some ideas.  So, long story short was a friend of mine that I went to school with introduced me to the Johnny Mac Soldiers Fund, so we came up with an idea to do the first Johnny Mac Soldiers Fund Challenge, which is an endurance event to raise awareness.

“There’s two primary missions: one is raise awareness for the fund, and then two is certainly try to get support and donations to help our veterans’ family members.  So I thought it would be a great opportunity.

“I’ve been blessed: grew up here in Fairview, had a very rural life, entered the service and had just a wonderful career.  And I just thought it would be an opportunity to try to do something to give back a little bit for all the blessings I had been given.  So, about a month after I talked with my friend Bob, who is on the board of directors for the Johnny Mac Soldiers Fund, I told him I’d do it, so here I am.  The main reason is just an opportunity to give back, and then we’ll figure out what’s next after this one.”

According to the organization’s website, “Johnny Mac Soldiers Fund honors military service and sacrifice by providing scholarships to veterans and military family members, particularly children of our nation’s fallen and disabled.

“Time and again, our soldiers and their families are asked to give of themselves for the rest of us.While they ask little in return, we owe them so much. Through education, we give back to those who gave. We give back to ‘Our Own.’ It's the least we can do.”

The fund was named for Col. John McHugh, who was killed by a suicide bomber in Afghanistan on May 18, 2010.  The West Point graduate and Army aviator left behind five children, who were aided in obtaining educations through a fundraising effort that became the Johnny Mac Fund.

An organizational fact sheet said: “What began as a small effort to help one fallen soldier’s family quickly transformed into our vision to help as many military families as we can.  Johnny Mac Soldiers Fund was created in 2014 to give back to those who gave—especially to those who gave their all, like Johnny Mac. Now he is symbolic of all who have served and sacriﬁced.

“Research shows that over 20,000 children have lost an active-duty military parent over the last 35 years.  While those children are eligible for education beneﬁts, often there are substantial college funding gaps remaining. We proudly work to alleviate this burden from those families who have already given so much to our nation.

Fallin and McHugh were acquainted during their time at West Point, and occasionally served together in joint aviation operations.  Fallin spoke highly of him, referring to McHugh as a quiet professional who placed faith, family and country above himself and called him “an all-around great guy.”

Fallin graduated from Fairview High School and enlisted in the Army in 1982.  After a short assignment to an artillery unit in Germany, he was appointed to the United States Military Academy at West Point, New York where he graduated in 1988 and was commissioned as an infantry officer.  Over the next 34 years, he held posts in Airborne, Aviation and Special Operations units prior to his retirement in August 2016.

And most importantly for some local folks, the colonel was Fairview High School’s 2006 Alumnus of the Year.

Fallin holds a bachelor’s degree from the United States Military Academy and master’s degrees from Troy State University and the National Defense University.  He is married to the former Megan Mitchell from New City, New York. Their daughter Casey is a graduate of the University of North Carolina at Chapel Hill, and their son Sean is a cadet at West Point.

With an almost 2,200-mile route through often steep terrain, the Appalachian Trail is far from a walk in the park.

Said Fallin, “I’ll tell you, I thought, having been in the military for a long time, I was in decent shape–granted, I had been out for a little over a year, but it has absolutely humbled me.  I overestimated how much distance I would cover per day, and, before I came off the trail, I was probably about 12 days behind what I thought was a decent schedule. But those mountains in Georgia and the Smoky Mountains were punitive in nature; they were punishing!”

Fallin has climbed up and down steep grades and faced five-degree wind chills during a snowstorm, all while living out of a 35-lb. backpack and sleeping in a small shelter tent.  Now he will have to concern himself with heat and staying hydrated, mapping out the distances between places along the trail where he can restock his food and water supplies. And because of precarious ground conditions at points along the trail, Fallin is far more concerned about a twisted ankle or broken bone in his feet than wildlife or bad weather.

“It’s a lot more complicated than I thought,” he said.  “It’s not just walking, as my family likes to tell me: ‘Dad, you’re just walking!’”

Fallin will have a little more than 1,600 miles to go when he gets back on the trail, and he hopes to reach the northern trail terminus at Mt. Katahdin, Maine in late September.

Said Fallin, “Growing up on a farm here in Fairview, I certainly wanted to go to school after I graduated from Fairview, but my dad was a plumber and a chicken farmer, and we just didn’t have those kinds of funds.  So I enlisted as a private in the Army; I signed up for this college fund. And I knew how difficult it was to pay for college, and I’ve got one daughter who’s finished college and another son who’s in college now, who’s also at the Military Academy.

“So I know first-hand how hard it is to pay for your own education, and add to it to pay for family members.  So the thing that, I guess, resonates with me personally is it’s the opportunity to help those folks because I think education is the most important investment we can do in our country, because if you invest in our children and our citizens, then the return on that investment can’t be measured.  You can’t put a dollar amount on it.

“You know, education is the one thing that no one can take from you, and it just opens up the doors for the opportunities to live the American dream that we all strive for.”

Col. Fallin has established a crowdfunding campaign through Gofundme.com subsidiary Crowdrise for anyone who wishes to contribute to the Johnny Mac Soldiers Fund.  Johnny Mac is a 501c3 nonprofit, and donations are tax deductible. To contribute or find out more, visit www.crowdrise.com/o/en/campaign/dons-appalachian-trail-hike-for-the-johnny-mac-soldiers-fund/donaldfallin.