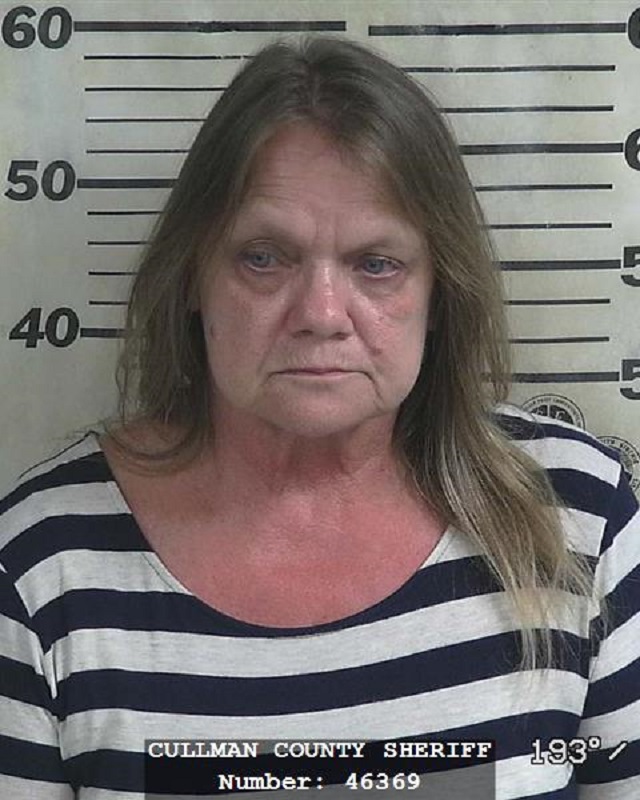 Susan Smith, the grandmother of murder suspect Andrew Maresh, was arrested on March 28, 2018 for hindering prosecution in the case. Authorities say she knew the victim was buried on her property in Fairview. On Monday, May 21, 2018 Smith was arrested and charged with murder in the case. (Cullman County Sheriff’s Office)

CULLMAN – The grandmother of one of the men accused of the murder of Hartselle man Daniel Ray Osborn II, 22, is now facing a murder charge in the case. Susan Winton Smith, 66, of Fairview was indicted by a Cullman County grand jury last week. She was arrested Monday. The murder charge is in addition to a charge first-degree hindering prosecution, for which Smith was arrested on March 28, 2018.

Osborn’s body was found buried on Smith’s property on March 26. Tyler Stephen Hudson, 20, of Baileyton and Andrew Jacob Maresh, 19, of Hartselle were arrested and charged with murder that same night. Authorities recovered the body of Osborn, who had last been seen by his family on Feb. 3, 2018, from Smith’s property on County Road 1534 in the Fairview community. Court documents revealed that Osborn died of a gunshot wound to the back of his head.

Smith, who is the grandmother of Maresh, “did conceal the body of Daniel Ray Osborn II,” according to the District Court complaint on file.

The complaint states: “On or about February 3, 2018, Susan Winton Smith was advised by her grandson, Andrew Maresh, and Tyler Hudson that they had killed Daniel Ray Osborn and buried him in her yard on CR 1534.  Since then, Susan Smith never advised anyone, to include the Cullman County Sheriff’s Office and/or the Hartselle Police Department of the murder/buried body of Mr. Osborn. On March 29, 2018, Susan Smith was arrested for Hindering Prosecution 1st Degree and booked in the Cullman County Detention Center.”

Smith was assigned a $10,000 property bond and was released after bond was posted.

Maresh was assigned a bond of $25,000 cash, which has not yet been paid.  He remains in the Cullman County Detention Center. The bail request placed before Judge Kim Chaney stated that:

Hudson was assigned a bond of $15,000 cash, also unpaid, and remains in the Cullman County Detention Center.  The bail request placed before Judge Kim Chaney stated that: