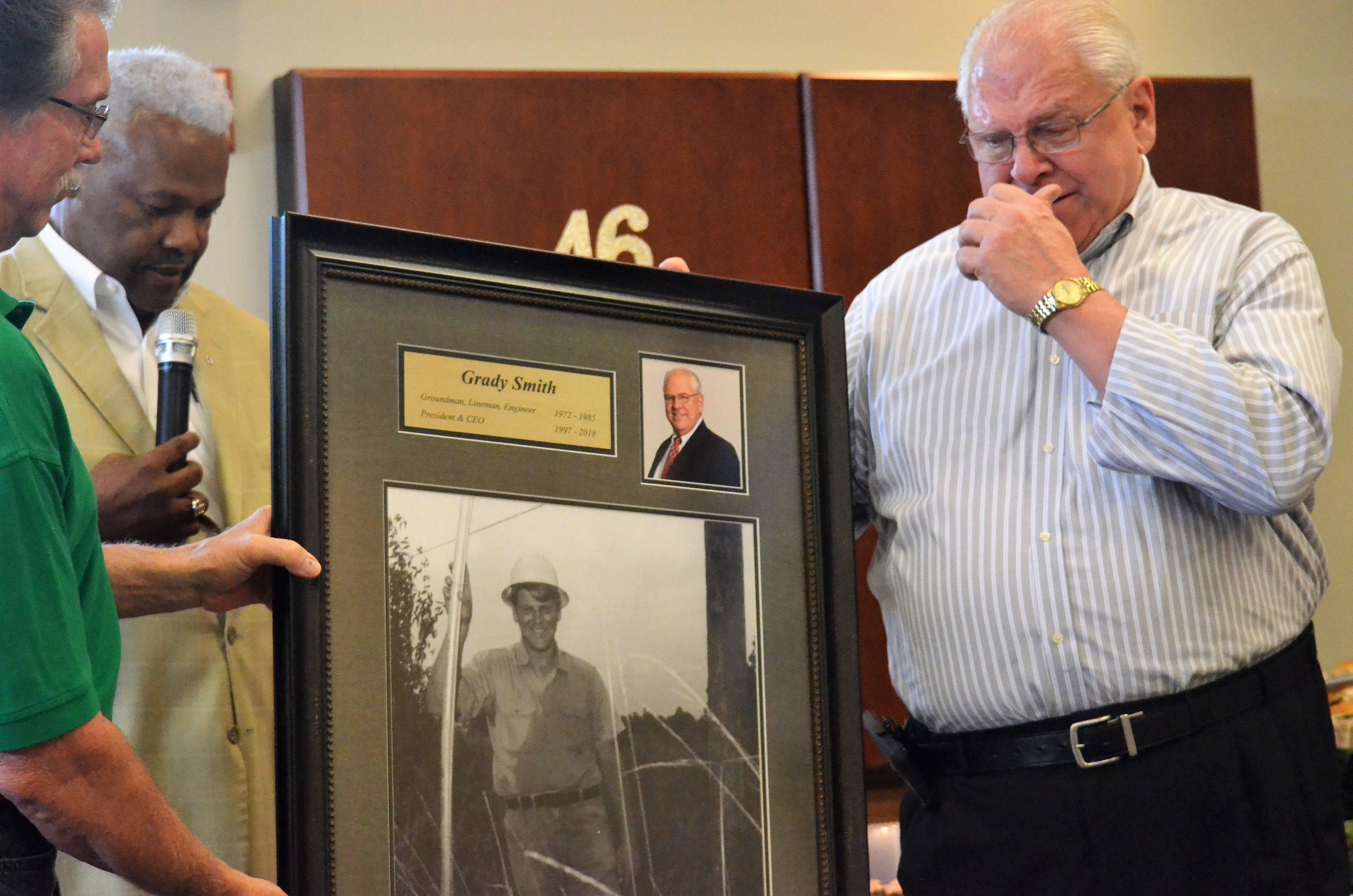 Retiring Cullman Electric Cooperative CEO Grady Smith, right, becomes emotional as he is told that the room in which his reception was held has been named the Grady Smith Community Room. (Nick Griffin for The Tribune)

CULLMAN – It was an emotional day at Cullman Electric Cooperative Tuesday as dozens of employees, colleagues, friends and family members gathered for longtime CEO Grady Smith’s retirement reception. Cullman Electric Co-op Board of Trustees member James C. Fields led the ceremony and got things started by talking about the first time he met Smith and how he came to be CEO.

“For Grady this is a tough moment. He’s dealt with this for the past few months, keeping the board in tears and we hate to see him go,” Fields joked. “Somewhere around December of 1997 our co-op was going through a transition and we were sitting around the table, a bunch of new board members, and we didn’t know what we were doing, and it just so happened we were getting ready to make a decision on the new direction of the co-op. The chairman at that time came to us and said, ‘Hey I got another resume, there’s a young man that we need to look at before we make a decision.’ Everyone said OK and it was late in the evening around 12:15 and at the next meeting he brought this young man in. He was a big, tall fella’ and we started the interview process and it was going along really well, and all of a sudden he reversed the roles and he as interviewing us and sharing with us his vision for Cullman Electric Cooperative.”

Fields smiled, talking about Smith’s performance as CEO and the impact he has made on the people around him.

“Unknowingly to me, I didn’t realize he had worked here before for some years and had left to work at other co-ops and manage other co-ops and was doing a great job. We were very fortunate to have him come back to us. Since then, he has performed to the highest perfection that anyone could have performed as a CEO of a cooperative that makes sure that little lady on the end of the line is provided power. She is just as important as those who live up on the road and he always stressed that, that we are to provide power with care,” Fields shared. “Anyone who has worked with this guy knows these facts about him; he’s a firm believer in the cooperative business model and its seven principles that we live by, and he loves his hometown of Cullman. As a result, his passion shows in each and every meeting or every time we are around him, his passion for the co-op and the role that we play in improving the quality of life for everyone that (is) touched by this co-op, even its employees.”

At the end of his speech, Fields revealed an honor for Smith that had been kept secret before the reception: the room in which the reception took place has been named the Grady Smith Community Room in recognition of Smith’s many years as CEO.

“As we prepared for this celebration, the board of trustees wanted to, in some kind of special way, recognize Grady’s commitment to, and his concern for, his community,” said Fields. “So, Cullman Cooperative along with its employees, members of the board of trustees and members that make up this co-op, they will little note and nor long remember what we say about this man today and what he’s going to leave behind, but we can never forget what Grady has done here. The future of the co-op is brighter, the hope of the co-op is brighter and it’s because of his leadership. He constantly encourages the board to seek out training to go to classes, to learn more about what it is we do. The most important thing we can do for Grady is to just bid him farewell with love. It is to make sure that that little moment in his life when he’s sitting on the porch or in the backyard or in his hobby shop, that he remembers the faces of those that he touched. On behalf of the board of trustees, your 34 years of service here, your commitment and your compassion give all of us a great honor. It’s a privilege. We’ve done something we hope that when people come by Cullman Electric Co-op, they’ll know Grady Smith was here. So, we named this room in your honor, because you have honored us with so much,” Fields smiled.

Smith closed the presentation ceremony himself with thanks to everyone who’s been part of his life with the co-op and a brief message to his employees and colleagues about the co-op going forward.

“Thank you very much. I can’t think of anything that would do me more good than to have something like that given to me, thank you. I can’t say thank you enough to everyone here that has supported me in so many different ways,” an emotional Smith said.

“I thank all of you for your support. We’ve done a lot of things, we’ve accomplished a lot and we’ve still got a long way to go. If you read my article in the May magazine, you read where my daddy loaned a wheelbarrow out to a fella and when the guy brought it back it had concrete in it. My daddy told me to clean it out and said there was a lesson to be learned there. ‘Always bring something back in better shape than it was when you got it.’ So, as I said at the end of my article, I feel good about leaving this place because there’s a lot of outstanding concrete chippers in this room that can fix it up no matter how bad we left it. It’s a little bit better than it was when we got here, but I know there is plenty of knowledge, skill and ability in here to continue that process. I hope you will look at things going forward as to what’s best for that little lady at the end of the line and what’s best for the co-op, not what Grady would do, because that’s not a problem anymore. I encourage you to be different. Work outside the box and there are people here that can do that. There are people here that are smart enough and that have the vision wide enough to keep things going as they are.”