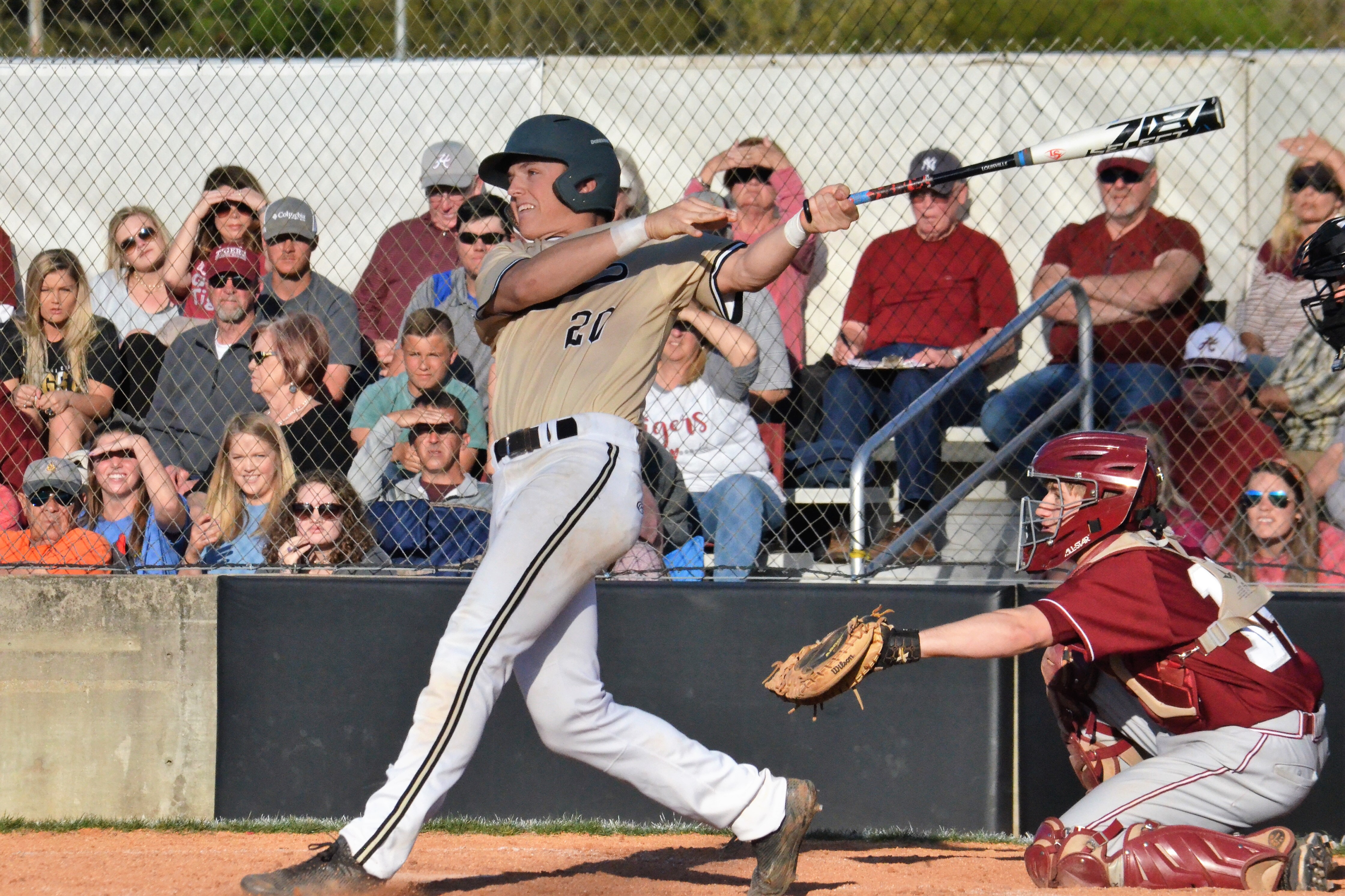 Grayson Taylor hit a three-run home run in the bottom of the fourth to give Cullman a 3-0 lead in game one of Friday's doubleheader with Hartselle. (Nick Griffin for The Tribune)

CULLMAN – The Cullman Bearcats fought off the visiting Hartselle Tigers in a couple of nail biters to sweep round one of the 6A, Area 14 AHSAA state playoffs and advance to round two Friday night. The ‘Cats took game one 5-3 and game two 4-1 in extra innings.

Game one featured a matchup between Tigers ace Garrett Wade and Cullman’s Michael Myers. Wade struck the ‘Cats out 12 times in their first matchup earlier in the season, but on Friday Cullman was able to come up with some timely hits and big plays on defense to take game one 5-3.

Wade was in a rhythm early for the Tigers, striking out five and allowing no hits through three innings, but in the bottom of the fourth ‘Cats shortstop Grayson Taylor put a three-run blast over the left-field wall and gave Cullman a 3-0 lead headed into the fifth.

Myers settled in with the lead and held the Tigers scoreless in the top of the fifth. The Cullman bats were able to push across two more in the bottom of the fifth, starting with a single into center field from Cooper Beck that got under the center fielder’s glove and allowed Brady Patterson to come home from second and stretch the lead to 4-0. Cullman was able to draw a couple more walks from Wade in the inning, leading to a fifth run when Beck crossed the plate on a passed ball.

Bearcats ace Will Morrison was on the hill for game two of Friday night’s round one matchup and he and the Cullman defense kept themselves in the game while their bats weren’t working. After the Tigers knocked one on in an RBI single in the bottom of the second, both starters dueled for four more innings before another run was scored. With just four outs left to play, down 1-0, Weston Norton pulled a double down the left-field line in the top of the sixth that tied the game at one.

Morrison continued to keep the Hartselle bats quiet through the sixth and seventh, taking the game into extra innings. One extra inning was all the Bearcats needed and they were finally able to take their first lead of the game when Carson Freeman scored from third on a dropped infield fly. With a 2-1 lead, Morrison singled up the middle to bring around Hayden Henderson and Beck and go up by three runs.

Morrison trotted back out to the mound for the eighth, and after a strikeout and a single, the ‘Cats infield ended the Tigers’ season with a 6-4-3 double play and a 4-1 come from behind victory. Morrison tossed all eight innings in the ‘Cats win, collecting six strikeouts and allowing one run on seven hits.

Head Coach Brent Patterson was proud of the way his team stayed in the game and maintained focus despite a rough start at the plate.

“I thought it showed a little maturity and of course, to be honest, maybe because we won game one it was easier to show that maturity, but man we’ll take any little lesson we can get,” Patterson said. “So, trailing for most of the game and then coming through late, like I said it shows some maturity and it shows some fight and it showed that we didn’t panic and one reason why we were down so late was because their starting pitcher did such a good job of moving the ball around just keeping it off the barrel. When we hit it, sometimes we hit it at them and he was really, really good so that’s a big win and a big series win. To beat a team like that with those arms and to mean as much as it does with them being the rival that they are and a respected program, that’s big for us.”

Patterson broke down the combined 15 innings that his starting pitchers Myers and Morrison threw to keep the ‘Cats alive in both games.

“Mike (Myers) was in a jam the first four innings, and they helped us a little bit with a couple mistakes and then our defense made a lot of plays. The thing about Mike is that he never stopped competing and when he was in those jams and going through the hard times, he never stopped competing and made big, big pitches. I’m bragging on our defense, but a lot of that wouldn’t have been possible if Mike doesn’t make those pitches. For him to show that maturity and that competitiveness when his back was up against the wall, especially knowing that we can’t give up many against Garrett Wade. Just the competitiveness he showed right there meant a lot to us and Will just continued to do the same thing,” Patterson said. “We could not push runs across, but he just kept doing his thing. To their credit, they hit a double that hit the left-field line and then they hit a bouncing ball up the middle and we’re behind early. Then they made a lot of plays in that game too, and finally we got the right people up at the right time doing the right thing and we were able to come through late and like I said it’s great to get any sort of lesson you can get and now there’s a little bit more belief that it doesn’t matter how late we’re down, we can still do it. I’m just thankful we got another week to practice.”

The Bearcats are now 29-8 and advance to round two of the AHSAA playoffs. Cullman will host either Athens or Pell City Friday, April 27.