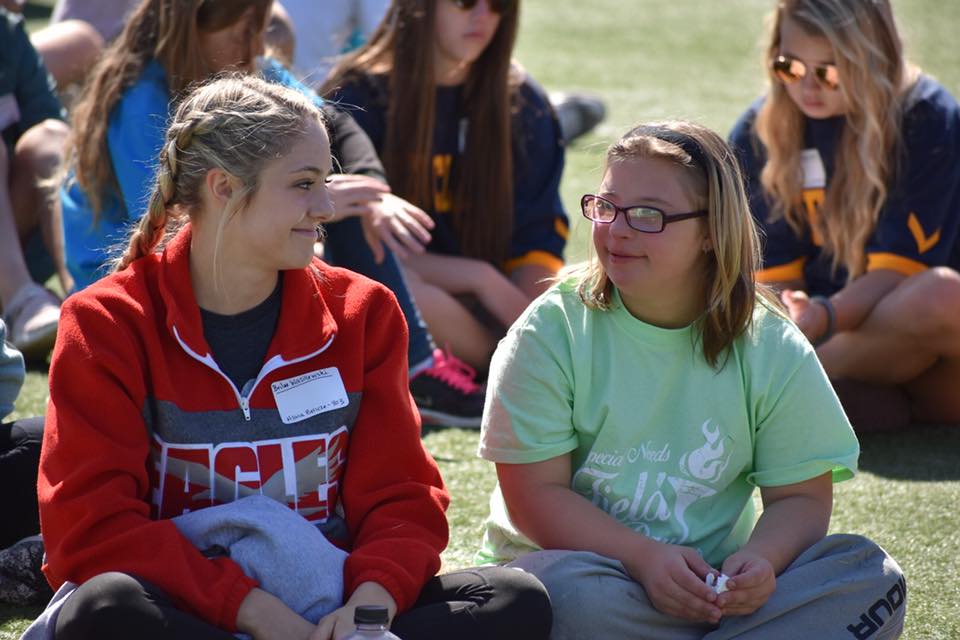 Every competitor had a buddy to stay with them throughout the day. (W.C. Mann for The Tribune)

Before the Torch Run began, Gentry told The Tribune, “This is just a good event.  This will actually be my fourth year running it with all the guys with the (Special Needs Field Day), and it’s just a good event for the children.  You know, we’re just all blessed to live in a community that comes out and supports our kids the way we do. Today will be a great day for all the kids.

At the stadium, Gentry passed off the torch to special needs athletes, who carried it around the track before the official opening of the games.

This year’s numbers of athletes, volunteers and spectators showed a marked increase over previous years.  According to Keef, “Last year we had, I think, like 130 student athletes participating, and this year we have almost 200.”

Part of the reason for that, she said, was the change of venue from the Child Development Center to Cullman High School five years ago.  The larger facility is better suited to large athletic events.

“It’s easier to have it organized in a bigger facility,” said Maureen Chaney, a retired Cullman special education teacher who worked with the program in its earlier days.  “It was too small for the crowd that was growing.”

Keef added, “This facility is what makes it.  If it weren’t for this stadium, we wouldn’t be able to have it all together.”

Each athlete had an assigned volunteer buddy from one of the area high schools to stay with him or her throughout the event, and so many students volunteered to help that there ended up being five more buddies than athletes.

“Every child got a helper this year, and then I had a few extra,” said Keef, “and then the sheriff’s department and the city police department, they also volunteer as well.  And the Pilot Club volunteers, they help with our lunch.”

Keef also noted the donation of event medals by Wal-Mart Transportation and the sheriff’s office’s donation of ribbons and cooking duties at the stadium.

“Everybody has been wonderful: all the principals, the special ed. teachers; all the club sponsors have helped tremendously.  Two days ago, I was missing 30 volunteers, and today I had five extra. So they come through on the last minute.