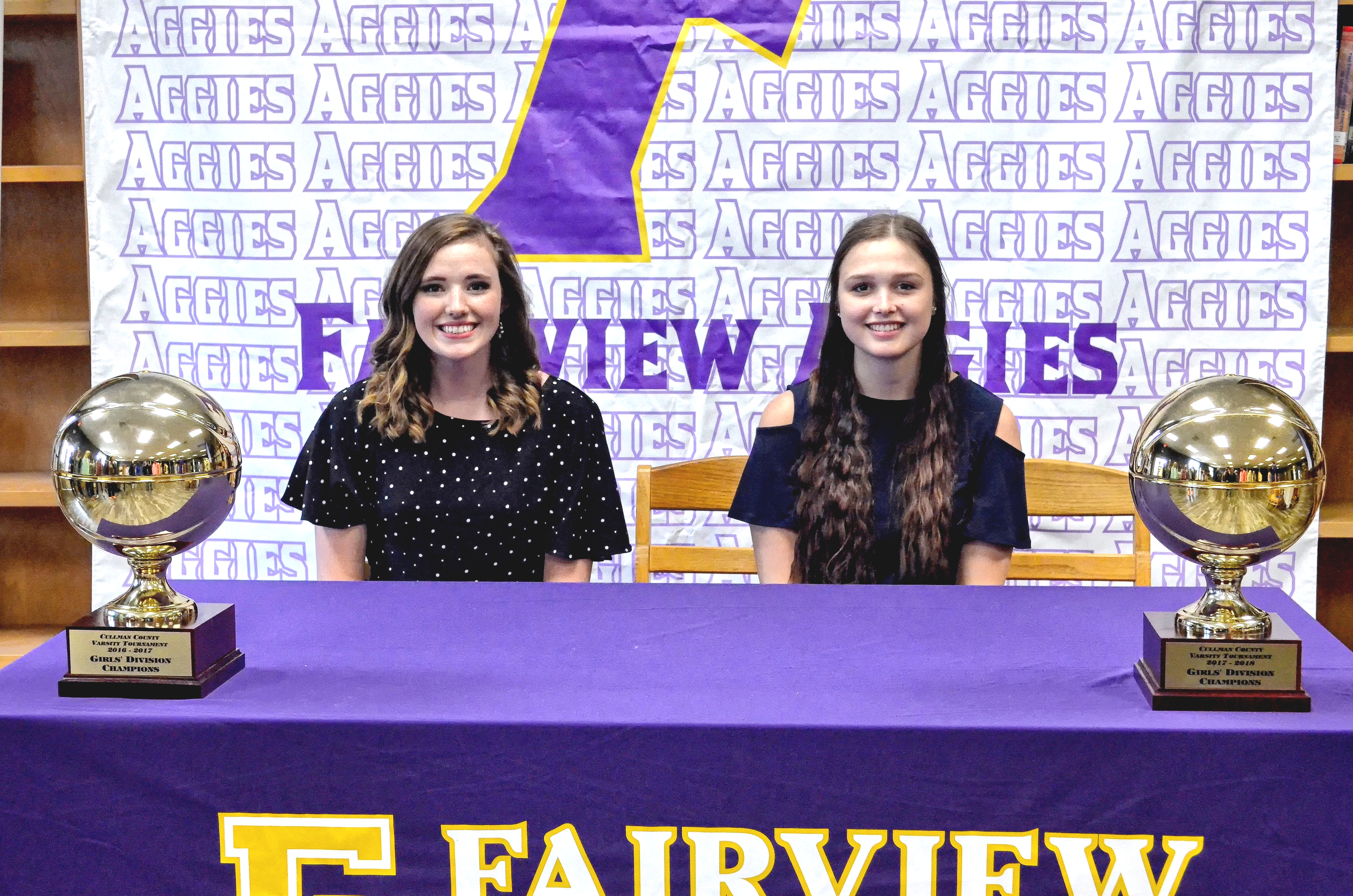 FAIRVIEW – Two Fairview High School Lady Aggies on Monday morning signed athletic to continue their playing careers at the collegiate level. The FHS library was full of friends, family and food for the occasion. Lady Aggies basketball standouts Abbi Taylor and Valentina (Ina) Klocker signed to play for Snead State and Faulkner University, respectively. Taylor and Klocker helped lead Fairview to an Area 12 title and the Northwest Regional in 2017-18 season.

Taylor, who passed the 1,000-career point mark in her senior season, reflected on her early days on the hardwood and how she has grown as a player.

“I definitely think I grew a lot. My sixth-grade year I started out really bad, and Coach (Mary) Hartline will vouch for that; I was horrible,” Taylor joked, “and I really didn’t even want to try out, but I did because I felt like I should at least try and not just give up on it. Coach Hartline was tough, she was really tough and there were days I hated practice, but over the years I understood what it meant to get better and why she was so tough on me and it just hit me that I could do this if I worked for it.”

Taylor said Hartline helped build her up over the years. She also talked about the injury that left her on the sidelines and in a boot last year and how that motivated her going into her final season.

“She really pushed me to the limits, I never thought honestly that I’d be able to play college ball; I didn’t think I’d be able to reach those standards. I would say probably my eighth-grade year when she moved me up to varsity that really hit me and showed me how far I had come, and it just made me want to work harder,” Taylor said. “Last season when I got hurt and I was out for a while after my surgery, not being able to play put it into perspective of what it will be like when I graduate, and I didn’t want that. I wanted to keep playing. I love the sport and I think it took me getting hurt to realize how much I love the sport and I’m just really excited to see what the future holds.”

Hartline was perhaps most impressed by Taylor’s willingness to stick with the game early on when she didn’t see immediate results.

Hartline tempered her expectations for Taylor going into the season after her injury but was pleasantly surprised to see Taylor continue to improve and play at a high level.

“I cannot brag on her enough, I was very worried at the beginning of the year that she wouldn’t be where she should be, and we talked at the end of last year about spreading her game and improving her game where she could take people off the dribble,” Hartline said. “I was just hoping she’d be able to turn around and shoot still, but at the end of this season she was taking people off the dribble in the short corner and making mid-range shots, so I was just so proud of her continuous improvement despite her setbacks.”

Snead State Assistant Coach LaSheena Nation is excited to add Taylor to the Parsons roster and touched on the attributes that made her stand out and catch her eye.

“We actually started looking at Abbi at the beginning of the year. I reached out to her coach and her coach told me she wants to come to Snead and I thought ‘Great!’” Nation said. “So, I went to her first game and she’s very athletic, she can run the floor well for a post player, she can shoot the ball outside, I really like her energy on the court; she’s a very communicative player and that just made us more interested in her.”

Taylor’s teammate and fellow post player inside, Ina Klocker, is headed to Faulkner University to play for the Eagles. Klocker moved to Fairview from Austria last year and in the limited amount of time she spent as an Aggie, she grew to love her teammates, coaches and the community around the school.

“I’m going to miss Coach Hartline and her practices and how she pushes us, and I’ll miss the girls. I improved a lot with them and they really push each other so they really help me to improve myself and my basketball and everything, and I’m going to miss how all the people around me are so friendly. I got here as a foreign exchange student; I didn’t know anybody, and they took me into their company and helped me and pushed me and I really appreciate that.”

Klocker’s goal in coming to the states was to earn an opportunity to play basketball at the next level, but she didn’t anticipate things going so well so quickly, especially considering the style of basketball that she grew up playing back home.

“My plan was that I wanted to play college basketball, but I didn’t know if I was going to reach that goal. I was just trying my best because I didn’t know how everyone was playing because the difference between basketball in Europe and America is huge; you can’t even compare that in our ages. I really didn’t think when I got here that I was going to get a scholarship offer so quick, but I think it’s cool and I really like it and I’m looking forward to the next four years.”

Hartline didn’t have as much time with Klocker as she did with the rest of her players, but in that short time she was impressed with how well Klocker was able to adjust to a new country on and off the court.

“I met Ina in August and she is a great player with so much potential that we didn’t even get to see this year because she’s facing difficulties that mostly none of us have ever faced. It’s one thing to know academic language but to actually have conversational language is something totally different so she had to face that all season. Then the game is so different from Europe to America and it’s a completely different style,” Hartline said. “Most of the girls have been in this system for years and she just stepped into it, plus she’s playing out of position because she’s actually a guard and she had to play post for me so just how much we saw her improve this year outside of her true position was just amazing. I think when she goes to Faulkner next year and gets to actually play guard and she’s more familiar with language and how things work in America then she’ll just be unstoppable.”

Just like everyone else, Faulkner Assistant Coach Jake Mitchell had never seen or heard of Klocker before last season, but once he and the rest of the Eagles staff saw her play, they knew she had the skills to play at the next level.

“The first time we saw her was during our fall recruiting weekend, and honestly, we had no idea who she was, and Coach Hartline told us about her and we said to bring her down, and as soon as she stepped on the floor Coach (Reed) Sutton and I were impressed. We liked her and immediately knew she was a ball player,” Mitchell said. “She was coming off mono and still looked really good so ever since then we’ve just been following her throughout fall and Christmas tournaments and the spring and just saw her progress through the year. We know she’s going to translate and be an immediate impact player for us, so we’re excited for her.”

After Monday’s ceremony and photo ops, Hartline reflected on one of her favorite memories of watching Taylor and Klocker play together last season.

“One of my favorite games from this year was the first time we played Good Hope. We had been working on a few things and I really wanted Ina and Abbi to be able to play together,” Hartline said. “I want to say that Ina had seven or eight assists in that game and they were all to Abbi and the high-low was working so well and that was just one of my favorite game memories, having a fun time watching them play together.”