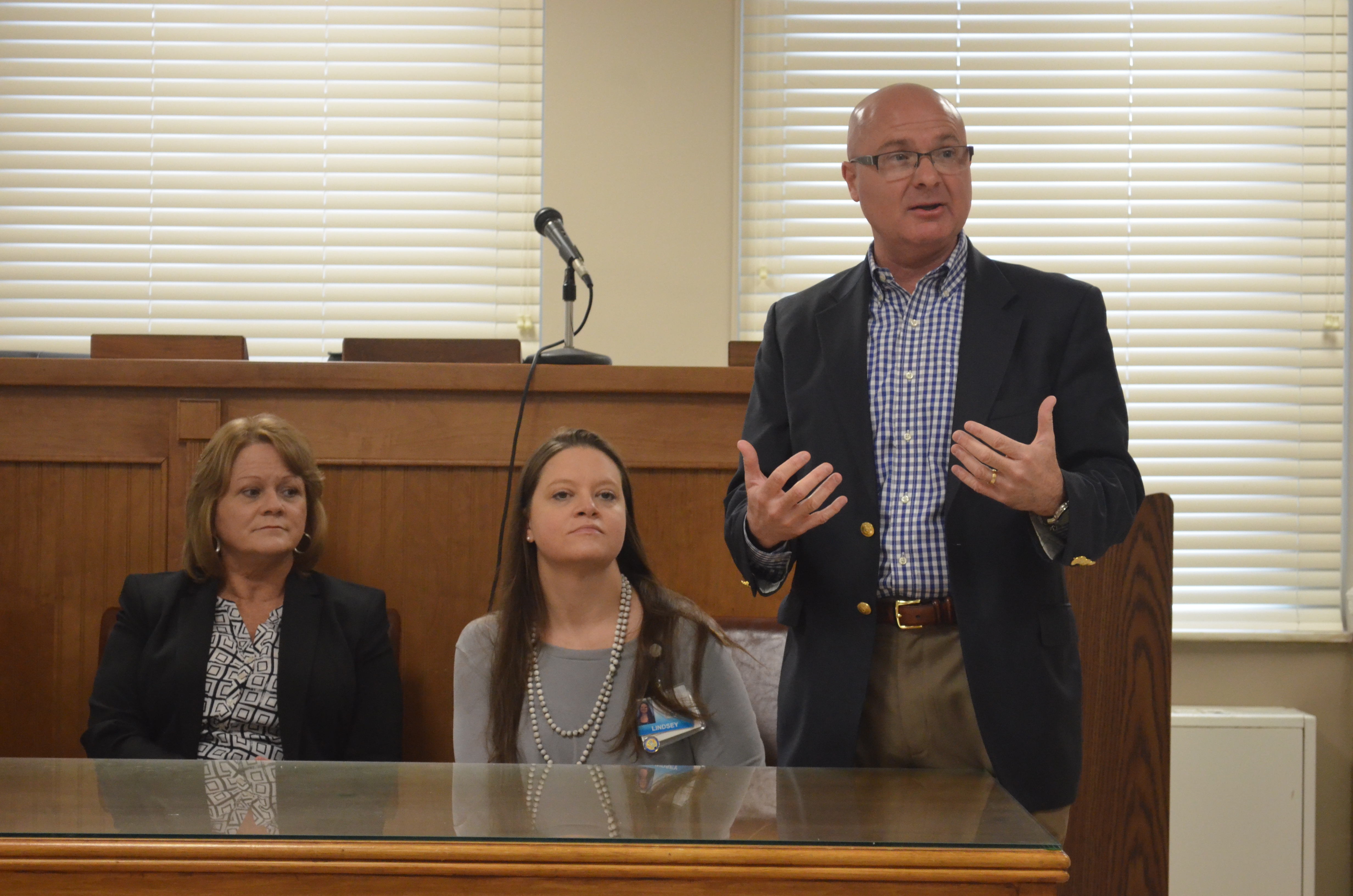 CULLMAN – The newly-formed Cullman County Mental Health Advisory Committee held a press conference at the Cullman County Courthouse Friday morning to share its three-phase plan for tackling the mental health crisis in the community. The committee was formed in response to Cullman County’s high suicide rate in 2017. Last year, a record 25 people took their own lives, jumping up from 15 in 2016.

“The hospital is there to help people, but at CRMC they’re really not designed to handle people with mental illness. They’ll be the first to tell you that they don’t have the space and they don’t have the qualified employees to actually address mental health problems. Now they do have the ability, and they do it quite well, to actually triage an individual and makes sure they’re medically clear,” Morrison said. “So, what was happening is all these partners up here, because of the federal government the first thing you have to do to is you’ve got to send someone to a medical facility to get them medically cleared before you can do anything else. That’s where, as you probably have seen, these individuals go to the emergency room and sometimes they’re stuck there literally for days because it’s a hard process trying to find a bed in the state of Alabama right now.”

“We no longer can wait on the federal government or the state, we’ve got to get on top of this immediately. Now saying that doesn’t mean we’re not going to need help from the federal government or the state. We are, and they will need to play a vital role in this and if they don’t it’s going to make it a lot harder, but we all decided that we needed to start locally. If you all remember when the tornadoes came through in 2011, what did Cullman do? We didn’t wait around two or three days or even a week on the state or the federal government, we got up the next morning and people came together to help each other. That’s one thing we’re blessed to have here in Cullman, we have a community that cares. With this plan, we plan on being held accountable to the public, we plan on showing them results, and then that will also help legislators in Montgomery spend more money.”

Blair agreed that mental health care is an issue that requires local attention and support as much as anything else and is excited to be part of the committee.

Brown is happy to see some steps being taken to address the mental health issue and pointed out Cullman Regional’s role in getting the ball rolling.

“I’m glad that we have started a group that involves everybody in mental illness and that we’re going to move forward with a plan that will alleviate some of the problems with beds and placement and holding people in the ER at Cullman Regional for so long,” Brown said. “I have to commend Cullman Regional for all that they do and actually initiating something where we can come together and make all of this happen.”

Van Dyke is excited to be part of the mental health committee as well, pointing out that addressing the problem head on and starting the search for funding is the first step.

“I’m happy to be working on this issue, we look forward to being able to develop some more funding sources to do these things in the plan,” Van Dyke said. “We’ve known for a while that these issues exist, and getting a concrete plan together is the first step toward addressing it. The next step is going to be finding the funding so that’s going to be a big part of it.”

The committee is also including additional training for law enforcement as part of its plan in order to better equip officers to handle situations involving people with mental health issues.

“We’re about to start doing some training for our local first responders to make sure that they’re better prepared to deal with individuals with mental illness or at least be able to recognize when a person might have some issues we need to deal with,” Morrison said. “Part of this stuff is criminal and of course you get involved with the criminal justice system and unfortunately some of the things we are doing now might now help folks that are already in the system, but our goal is to reach that individual before they do anything that throws them into the criminal justice side of it. Long-term, our whole goal is to address this and help people before they get to that point.”

Morrison started to break down the steps to improving care locally for people struggling with mental illness, starting with finding more beds in Cullman.

“Our first step is how do we relieve the stress at the hospital because we have folks sitting out there unnecessarily. So, Chris (Van Dyke) is heavily engaged with the hospital, Judge Brown is heavily engaged with the hospital and we did find some beds. One of the issues was trying to find beds and we have beds here in Cullman,” he said. “We have beds at The Sanctuary (at the Woodlands), there’s plenty of beds there; unfortunately because those beds are not connected to a hospital, Medicaid at this time says they can’t pay for them. I’m working with the folks that own that facility and we’re going to try to get the federal government to give us a waiver. In the meantime, though what we hope will come out of this is that we raise enough money here locally to help place an individual down there to get them stabilized and then we’re going to connect them back with Cullman Mental Health (WellStone) to receive these day programs.”

Continued Morrison, “The other part of the first phase of this is generating some extra revenues so that Chris and Mr. Blair can expand existing programs. A lot of people forget that if you’re struggling with mental illness it’s nothing to be ashamed of. That’s one of the issues that we’re facing right now is there is still a stigma out in society that if you have mental illness you can’t talk about it, don’t ask for help, stay in the closet, which is unfortunate because if people don’t come out and start talking about it, we can’t solve the problem. So, part of the concept of this whole idea is to add more day programs to help individuals that are struggling with mental illness.”

Morrison continued, expanding on the committee’s ideas to find funding for the plan.

“The funding here in Cullman has not really changed in the last 13-15 years. We’re still trying to do what we did 13-15 years ago with the same amount of funding, yet we have an increase in mental health problems. Then we have less state facilities to send people to so it’s hard to say one thing that caused this. Let’s take the state dollars and shift it back down to the local level, put all the money you can back out into the communities and you’ll solve these problems. Obviously the first group of folks that we’re going to reach out to are our local governmental entities i.e. the Cullman County Commission, who over the years have been very supportive of what Chris has done here in Cullman and also the hospital through the indigent care funding. Sometime in the future we will set up a meeting with our three county commissioners, present them with what we’re proposing to do, explain to them the steps, and in the long term, actually save the county money. That’s also the local townships, municipalities, etc.” Morrison said.

“We know Cullman can’t take care of all this financially and we understand that. We’re not asking them to bear the burden of all of it. What we’re asking is for them to chip in and help with this and then at the appropriate time we’ll sit down and start looking at grants that might be available in this country, but most of those grants will not do anything unless you can show local community buy-in. In other words, we’ve got to find the money and our first steps are with local government entities first, then our local civic groups, churches and all along we’re asking individuals to contribute.”

Continued Morrison, “Look at this from the standpoint that not only is it just the right thing to do but look at it from an economic impact. Do you realize that every year in this country we lose hundreds of millions of dollars in work time from individuals and their families struggling with mental illness? So even if you don’t care about this from the humanistic side of it, look at it from an economic standpoint. Plus, this will relieve some of the pressure they have presently at the Cullman County jail. Unfortunately, when individuals who happen to have mental illness or struggle with mental problems, sometimes they do things that they shouldn’t, and that puts them into the criminal courts system and they end up in the county jail or the state correctional facilities and as we know, our penal system is not designed to work with people with mental illness. So now you have someone sitting in the jail or state facility that are not receiving the proper care.”

Morrison and the committee’s message was that the mental health crisis in Cullman has to be taken seriously and talked about openly in order to find solutions before the problem continues escalating.

“If we do not put more money into helping our children, we’re going to have a tragedy that’s going to hit us down the road in this community,” he said. “We’re very blessed nothing bad has happened in Cullman and I pray every night that nothing will, but if we don’t step it up soon, God forbid what could because there are young people here that are struggling and need help.”

The dramatic rise in the number of people needing inpatient care has created a crisis in local emergency departments, including Cullman Regional, which are required to provide medical clearance to admit patients to scarce psychiatric hospital beds. Patients routinely wait days and sometimes weeks in the emergency department as they await an open psychiatric bed.

Often times, patients receive inpatient treatment and are able to return to society; however, without continuous care and programs, they frequently return back to the emergency department for treatment which begins the cycle over again. This phase seeks to create and/or grow outpatient day programs and outreach workers who can follow people with a history of mental health illness and intervene prior to a crisis situation.

After successfully completing phase one and two, the committee believes the creation of a freestanding crisis center to provide triage and crisis treatment for adults and families with mental health or addiction crisis is the best long-term solution. The committee has reviewed several models from around the United States and believes this will alleviate the pressure on both hospitals and local law enforcement in dealing with individuals or families in crisis.

For more information on the advisory committee or how to get involved, contact any of the local partners or Morrison at 256-339-6555.

Direct contributions can be made at https://cullmanregional.com/community/make-a-donation/.