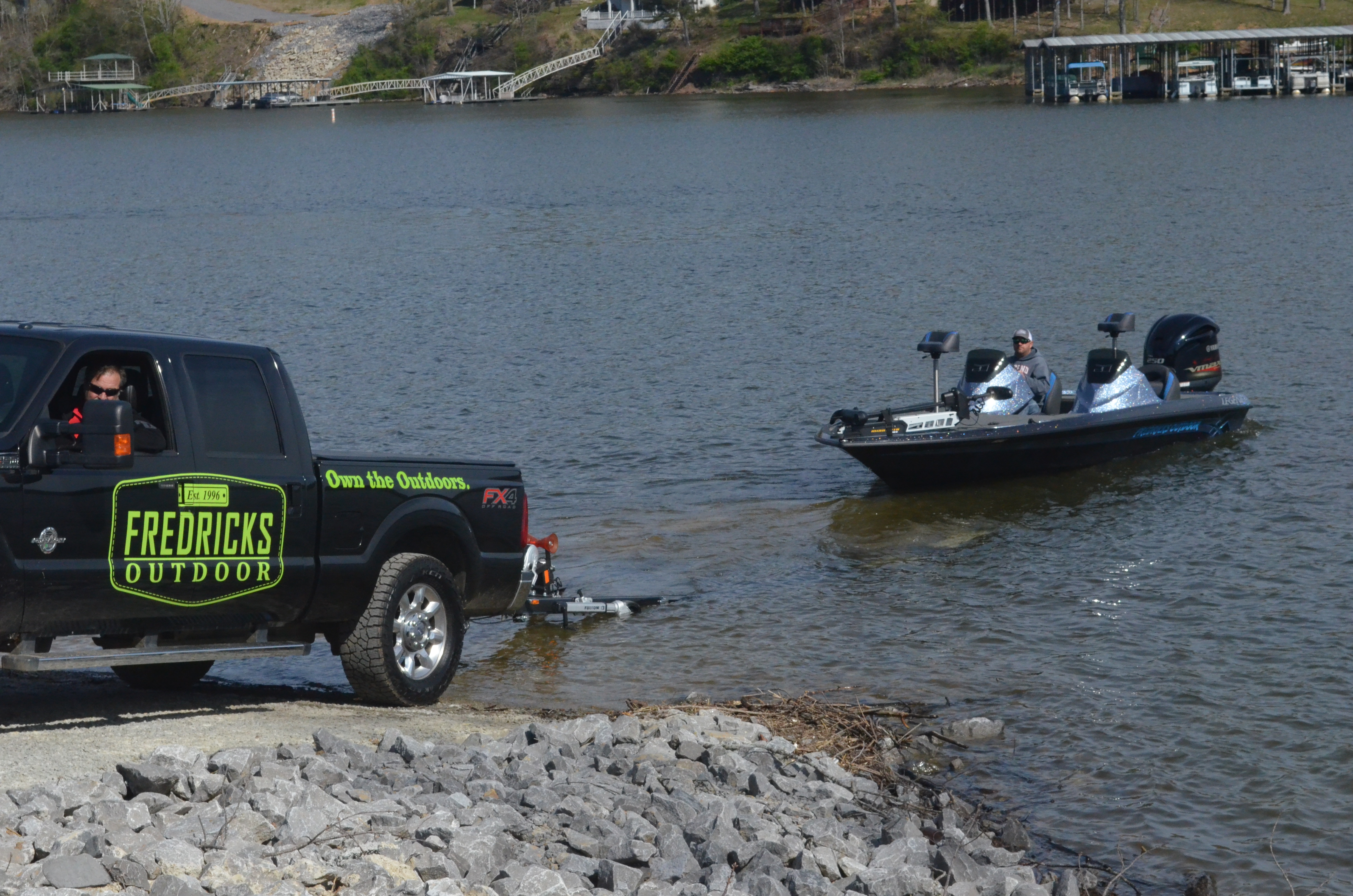 The first boat slips into the waters of Smith Lake from the newly-expanded boat ramp on Thursday morning, April 5, 2018. / Nick Griffin for The Cullman Tribune

TRIMBLE – There was a small crowd gathered at Smith Lake Park Thursday morning for the official ribbon cutting of the park’s brand-new boat ramp. The new ramp is three times the size of the original, making for a much more convenient launching spot for people looking to enjoy the lake.

Cullman County Parks and Recreation Director Doug Davenport was excited to see the project come to fruition and start serving the community. Several factors delayed the project over the last few months, but they were able to complete the project in a relatively short time nonetheless.

“This project came from the state, the game and fishery department (Alabama Department of Conservation and Natural Resources), so there weren’t any local tax dollars used for it. It is a six-ramp, we did have a two-ramp facility here before and we always had complaints from people during tournaments or during the Fourth of July, so we got a permit and got this process going to bring us to today’s adventure five and a half years ago,” Davenport said. “The project kept getting delayed for different studies of the different species in the water and getting permits and finding the funding and when we finally got to the time to break ground we ran into a winter freeze and rain. Our goal was to get it completed in 95 days and we were about two and a half weeks beyond that, but the state actually told us they were very happy with the timeframe that we were able to complete the project.”

Although the grand opening celebration took place Thursday morning, there are still some more features that will be added in the near future.

“The second phase will take place starting about mid-October. There’ll be all the piers put in, there’ll be a little 8-foot-wide foot bridge and there’ll be more parking as well,” Davenport said. “We’re basically going from 93 parking spaces to 198 and from two slips to six so this is a great day for Cullman County. This is kind of a once in a lifetime deal that you and I won’t see take place again and this should last for generations to come, too.”

The new boat launch will not only serve as a state-of-the-art convenience for casual boaters and fishermen in the community, Davenport is optimistic that the new facility will allow the department to host events on the lake and bring in an economic impact that it couldn’t before.

“We reached out about five years ago to FLW (Fishing League Worldwide) about hosting a tournament here and even to the Bassmasters. They just told us up front that our facilities couldn’t accommodate what they need. Walker County gets the majority of the big tournaments down there because of all the ramps so we wanted to be able to have the same opportunity in Cullman and give anglers a better place to launch out of,” Davenport said. “Even our tournaments here, a lot of them still launch from the dam and come up to this end, but this facility with all the docks we’ll have, I think it’s going to be close to 300 feet of dock, we’re just very excited for it. It’s a great day for the community and for the park.”