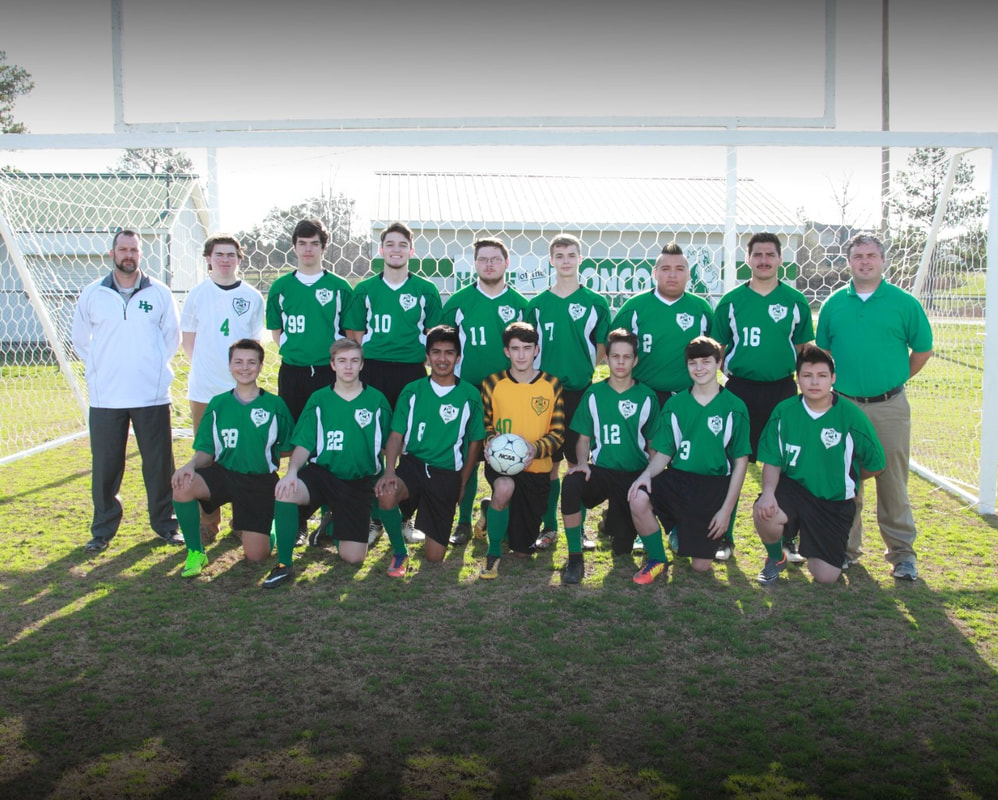 HOLLY POND – The soccer program at Holly Pond High School is very young but growing fast. Last season, the Broncos fielded their first every soccer team with their JV Girls squad, and this season a boys’ JV unit has joined them. Coaches JC Rankhorn and Jeff Daniel led the Lady Broncos last year, and this season Rankhorn has taken over as the boys’ head coach.

Rankhorn is pleased with some of the progress he has seen in the team’s first year and thinks experience is the best way for them to improve going forward.

“It’s been going really good, obviously it’s a building year, but I think we have some pretty good talent,” Rankhorn said. “In hindsight I kind of wish we could’ve started last year, just to have a little more soccer IQ, because I think that’s one thing we’re kind of lacking a little bit is just knowledge of the game.”

Despite the program being in it’s opening season, the Broncos have six seniors, bringing leadership to an inexperienced roster. The six upperclassmen have been the core of the Broncos team so far this season and Rankhorn is happy to see them enjoying it.

“We’re inexperienced definitely but we actually have six seniors. Last year they were juniors that really wanted to play and now they are my seniors and then I have a couple of sophomores, a freshman and a couple of eighth-graders actually so we’re spread out and I was surprised at how many seniors I have this year. We consider all six of them leaders,” he said.

“Zack Hightower, this is the first year he’s ever played soccer; he’s been my goalie and I couldn’t ask for a better goalie, so I can’t imagine what he would’ve been like if he’d been playing all his life,” Rankhorn said. “Luis Garcia is another one, he’s been playing football and he loves it but he’s also a natural at soccer. Chase Hiesler is new to Holly Pond, but he actually scored one of the three goals we’ve had this season on a free kick and he enjoyed that a lot so that’s a moment he’ll probably never forget and hopefully he’ll get some more of those. He’s really stepped up and he loves it, so these guys are really growing, and this is their last year, so I want my seniors to play as much as possible because this is the only year they’ll get to play.”

Rankhorn is focused not only on this year’s team, but on laying the groundwork for a soccer culture in the community that will help the program thrive.

“People are still learning that we have soccer in Holly Pond. It’s something new; last year we did a little soccer camp and that’s something we might do again this year just to keep that momentum going because we had enough for a team this year and we want to build on that. We’re laying the foundation, and I hope it’s a good foundation we can continue building off of.”

Even though the soccer program has started with exclusively JV teams, that won’t be lasting much longer according to Lady Broncos Head Coach Jeff Daniel.

“When we started last year; Ms. (Kim) Butler thought it would be best for us to play at the JV level to give us some games to where we could be able to compete. We wound up winning a game last year against a varsity team and tying another one. Of course, a lot of the teams in the county are just as young as we are in some aspects; they’ve had programs longer, but they’re building just like we are,” Daniel said. “This year she made the decision to keep us at the JV level, especially with bringing the boys on, but next year we’ll declare and go to varsity, which will put us in a section and we’ll play teams in our area as a set schedule and then be able to fill in some spots outside of that of course.”

Daniel has seen a warm reception for the program within the community.

“Being a start-up program we kind of compete against baseball and softball but other than that we’ve had a pretty good reception. People are excited that we have a program. They’re still kind of surprised when they hear it, especially people who haven’t been around for a few years and the first question I get is, ‘Holly Pond’s got a soccer team?’ but when they find out about it everybody is real receptive and real encouraging. Several people have told me that it’s been a long time coming that they need it so it’s a real good thing.”

Coach Daniel has seen his team get a little better every game since the team first hit the field last season. His unit has been learning how to play together and polish its fundamentals.

“We’re not a fast team so we have to play smart,” he said. “I think that the thing we have improved on thus far is we’ve improved defensively, but not only that, we’ve improved in our tactics as far as how we move the ball around. My whole thing throughout the year that I’ve been preaching is spacing. I’ve seen some improvement and I think we’ll continue to do that because if you lose your spacing you lose everything. That and just general ball movement and being more accurate with our passing, that’s where we are going to see the most improvement, the basic stuff.”

Perhaps the most exciting thing for Coach Daniel and the girls’ soccer program is its youth. This year’s squad is made up of two seniors, two juniors, six sophomores, two freshmen and an eighth-grader. With 11 of his 13 current players eligible to return next year, Daniel is excited about the future of the program.

“Last year we had a majority of sophomores and freshmen, this year we have majority sophomores, so I’ve got two more years with those girls and I’m really looking forward to that. The growth that I’ve seen in just that class, it gives me encouragement to go forward, and not only that but the ones who are juniors and seniors this year have been a real benefit for our program. It’s a real good feeling moving forward knowing that we’re growing it the right way, kind of young and letting those girls mature through the program at the same time. It’s real encouraging.”

Both the boys’ and girls’ teams will be back in action for the Broncos April 2 when they travel to J.B. Pennington to kick off the second half of the season.