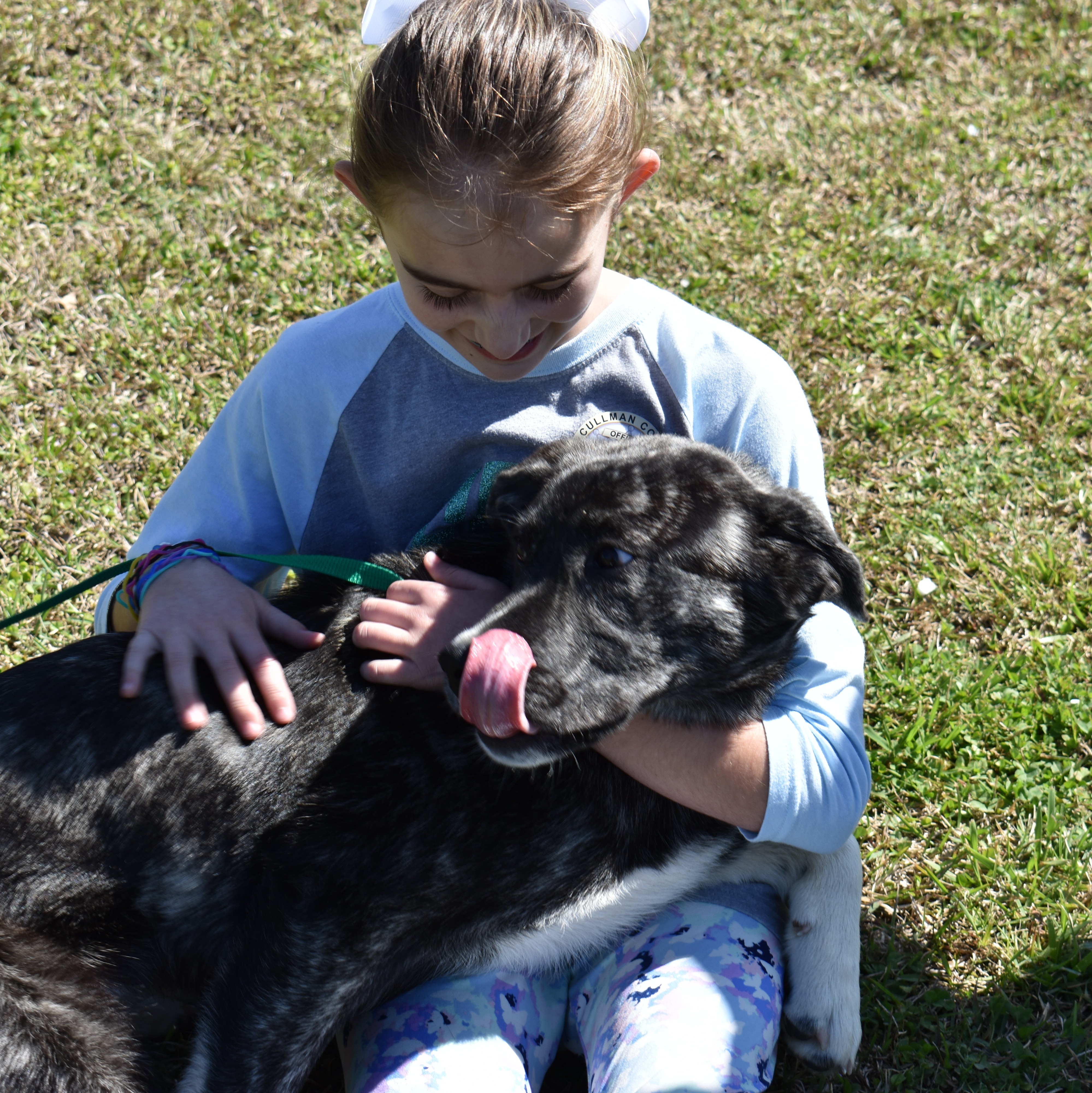 A shelter dog gets a snuggle from one of the many children who stopped by Paws at the Park on Saturday. / W.C. Mann

And this truly was a celebration: the shelter has seen an unprecedented upsurge in pet adoptions in recent weeks.  Even at the park, the trend continued. “Paws” opened at 10 a.m., and by 10:30, two of four dogs the shelter brought out had already been adopted.

Animal Control officer Dwain Floyd told The Tribune, “Our adoption rate’s been out the roof!  I would say right now they’re at 95-plus percent (of adoptable pets). I mean, that’s unheard of.  It’s been great!

“We were worried about not having anything to come today.  We had our dogs picked out in the middle of the week; then, Thursday, they adopted three of them out–some of the ones we were planning on bringing . . . It’s been awesome! I mean, you can’t ask for better.”

The animal shelter was also recruiting volunteers and pet foster parents.  According to Floyd, volunteering at the shelter is a fun way of giving a little community service for adults and students 16 and older.

Many of the dogs that come to the shelter have had little or no positive interaction with people before arriving.  They come in timid and scared, but staff and volunteers help them learn to socialize, and, more importantly, to trust.  The dogs learn good behaviors like walking on a leash and playing without being overly aggressive.

The result is dogs that know how to be good pets.  Many will end up becoming service dogs for children with special needs.  According to Floyd, five of Cullman’s shelter dogs have made that career move in just the last month.

What about the cats?

Volunteer Donna Ruttkay, who has been the shelter’s liaison to The Tribune for its “Pet of the Week” series, reported that cats have a very high success rate at the shelter.  They tend to get adopted quickly, and, on those rare occasions when the shelter finds itself with extra cats, local pet shops have no problem finding homes for them.

“These guys care.  They care. They take care of the animals, they take them off the street where they can be in danger of being hit, maimed, killed, whatever.  They’re here, they’re put in the shelter. Like the captain said, this might be the first time they’ve ever had a fresh bowl of water and food every day.  And they’re safe, warm . . .”

Floyd chimed in, “And they make the best pets!”

For more information on adopting, volunteering or pet fostering, visit the Cullman County Animal Shelter at 935 Convent Road NE in Cullman, visit online at www.petfinder.com/member/us/al/cullman/cullman-county-animal-shelter-al182/ or  www.facebook.com/cullmancountyanimalshelter/, or call 256-734-5448.