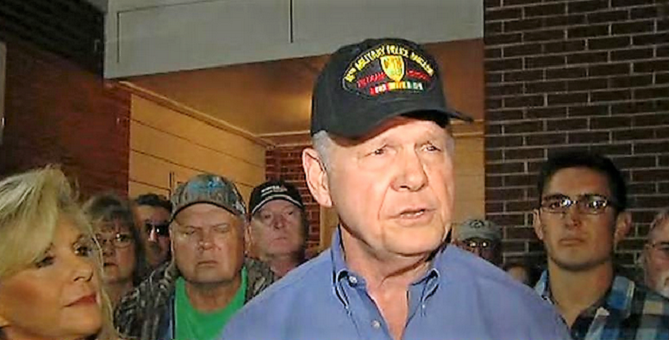 CULLMAN – A fifth accuser came forward on Monday, alleging that Judge Roy Moore, Alabama candidate for U.S. Senate, sexually assaulted her when she was a teenager. In a press conference Monday afternoon, Attorney Gloria Allred called for a congressional hearing by the Senate Judiciary Committee, where she said her client would testify under oath about an alleged sexual assault.

The announcement comes following last week's Washington Post report in which Leigh Corfman claimed she had a sexual encounter with Roy Moore when she was 14-years-old. Moore was a 32-year old assistant district attorney in Etowah County at the time of the alleged incident.

Moore called the allegations in the Post's report "completely false and a desperate political attack."

On Monday, Beverly Young Nelson told reporters she was working at the Old Hickory House in the late 70s, where Moore was a regular.

While Nelson said he complemented her, she did not "encourage his flirtatious behavior."

She also showed a yearbook he had signed of hers. She was 16 years old when the alleged incident occurred.

On what she described as a cold evening, Nelson said her boyfriend was late picking her up from a shift at the restaurant.

She said Moore offered her a ride, but instead took her behind the restaurant where he groped her.

"I was terrified," she recounted, "He was also trying to pull my shirt off. I thought that he was going to rape me.

"I had tears running down my face."

Nelson said Moore eventually "gave up" before making her get out of the car.

She claims he also stated, "You're just a child, and I'm the DA… and if you tell anyone about this, no one will ever believe you."

Nelson stated she was left on the ground as Moore "burned rubber" leaving the restaurant. She said she quit her job at the restaurant the next day.

Moore addressed Nelson's allegations early Monday evening, saying, “I want to make it perfectly clear. The people of Alabama know me. They know my character. They know what I’ve stood for in the political world for over 40 years. And I can tell you without hesitation this is absolutely false. I never did what she said I did. I don’t even know the woman. I don’t know anything about her. I don’t even know where the restaurant is or was. And if you’ll look at this situation, you’ll see, that because I’m 11 points ahead, or 10 or 11 points ahead, this race being just 28 days off, that this is a political maneuver. It has nothing to do with reality. It’s all about politics.”

According to Allred, if the Senate fails to hold a public hearing, she plans to have Nelson answer questions "in a different public forum."

When asked what will happen if Moore withdraws from the Senate race, Harbison said, “I think that is a very unlikely situation because there is no proof any of these allegations are true. It seems strange that after 40-plus years of public service, two runs for governor, two runs for state chief justice, and some other controversial activity that all these people are conveniently coming out with allegations weeks before a major pivotal election.”