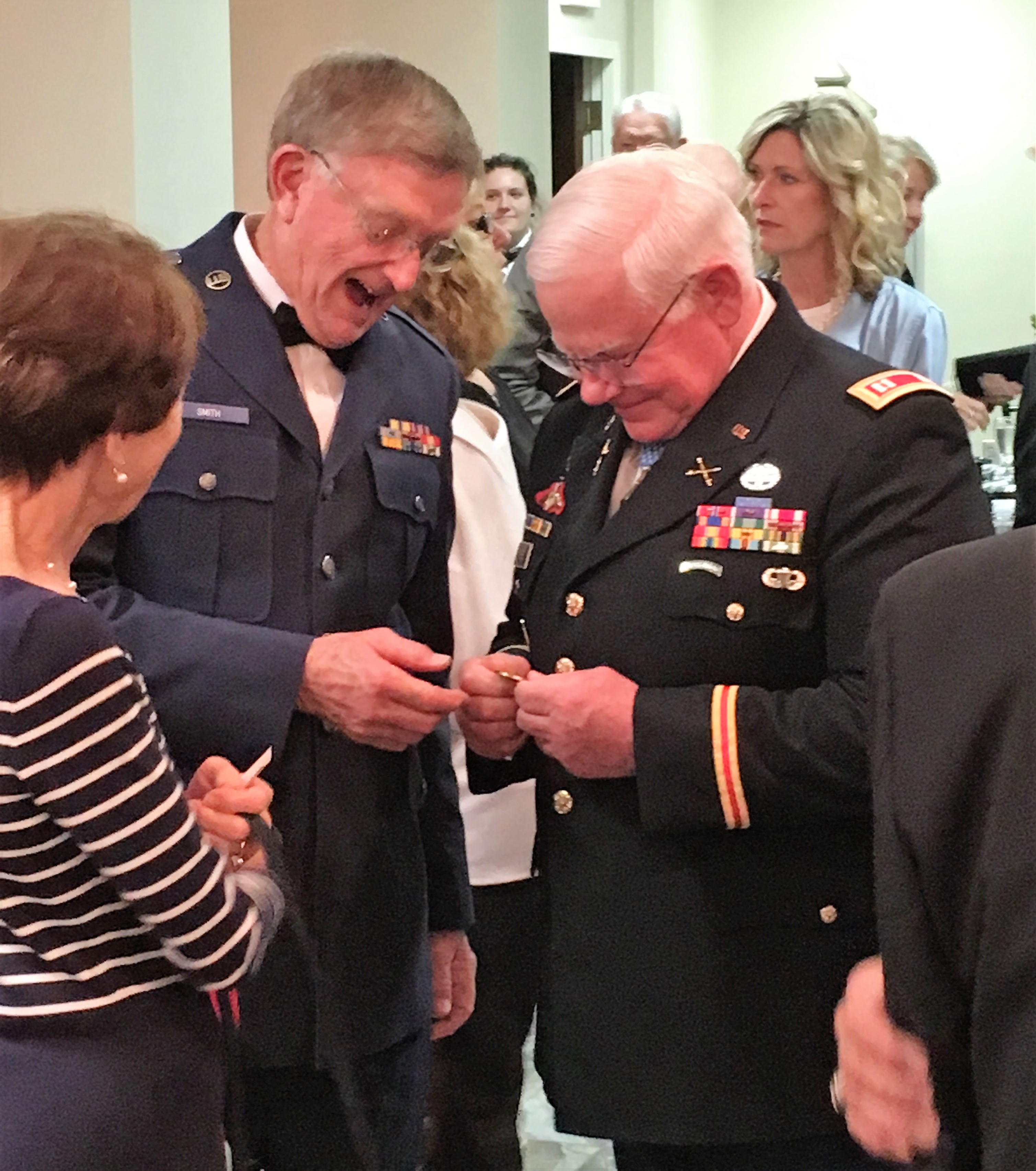 The evening’s guest of honor, U.S. Army Capt. Mike Rose, was a Green Beret medic serving with the 5th Special Forces Group serving in long-undocumented operations in Laos as a member of the top-secret Military Assistance Command Vietnam Studies and Observations Group (MACVSOG, often referred to as MAC-SOG).  On a four-day mission, Rose’s unit found itself already under fire before its helicopters even landed.  Repeatedly placing himself in the line of fire and even boarding a crashed and burning troop transport helicopter to tend the wounded, Rose brought home all but three men of a 136-man force, though almost half were wounded, some multiple times.

His nomination for a medal would have to wait until the U.S. government went public with its involvement in the secret Laotian war.  The process began in the late 1990s, taking almost 20 years until just this past August, when Rose received a phone call at his home.

In a talk with The Tribune before the dinner, he laughed out loud as he described that moment. “I knew that people had been working on it; plus the fact that I knew it was going to happen, because it was in the 2017 National Defense Authorization Act.  And so, it was not a total surprise.  I can tell you, though, until you’re officially called, you know it, but it’s not official until somebody calls.

“They always tell you it’s a high-ranking government official; well, historically, it’s been the president.  When the president called me on Aug. 3, it was really surreal for me, because I got a call about an hour before he was going to call, to verify my phone number and that I was going to be home.  Then, about 15 seconds before 2:00 central time a woman called and said, ‘Mr. Rose?’ and I said, ‘Yes,” and just like in the movies: ‘Please hold for the President of the United States.’

“And Margaret started laughing, because she said as soon as that lady said that, I came to attention, my feet went 45 degrees.  I had the phone in my left hand, my fingers curled, my thumb went to my (pants) seams.  The whole two or three minutes he was talking to me, all I could get out was, ‘Yes, Mr. President,’ ‘Thank you, Mr. President.’  And she’s over there, trying to keep from laughing, because I probably looked pretty silly standing in my kitchen at attention, and–I might add–in jeans and a T-shirt, too.

“I thought, when he hung up, ‘Gee, the man must have thought he was talking to a real nimrod.”

On a far more serious note, Rose told The Tribune what receiving the medal meant to him.

“What is means to me, specifically, is the vindication and recognition of the men who fought on (Operation) Tailwind; and that includes the Air Force and the Marines that fought with us.  But it also is recognized that, for 30 years, we didn’t exist.  The government didn’t admit that we existed; we were a non-entity.

"And one of the things that we are proud of–us that served in MAC-SOG–is the fact that, even the North Vietnamese said that we tied up–there were only about 900 to 1,000 of us at a time, in three locations–we tied up almost 50,000 infantry that were supposed to go south to fight the Americans.  And we take pride in the fact that there’s 58,000 names on that wall (the Vietnam Memorial), but what we did probably prevented it from being over a hundred thousand.  That’s what we did: we saved lives.”

During his address to the audience, Rose explained what happened during the mission for which he earned the nation’s highest military decoration.  While describing his own actions, he constantly referred to the other soldiers and other military branches that contributed to not just his success, but his very survival.  He noted the Marine and Air Force veterans in the audience, and said that “without the Marines and the Air Force, we would never have left Laos.”

He talked about the veterans that he knew as a child: veterans of WWI, WWII and Korea, and the values of patriotism and service they instilled in him, saying, “I grew up in an environment where I was convinced that I lived in the best country in the world.”

Rose concluded by addressing the veterans again, “Generation after generation of men and women such as you have stood up, raised your hand, signed your name, and said, ‘I will go, sir,’ not knowing if you’ll ever see your family and friends again.  Because you know if you don’t do it, then the ones who are really going to lose are your families and friends, and your children and your grandchildren, and all those people coming.

“Remember and honor the past.  Live in the future only after you have gone through the present."