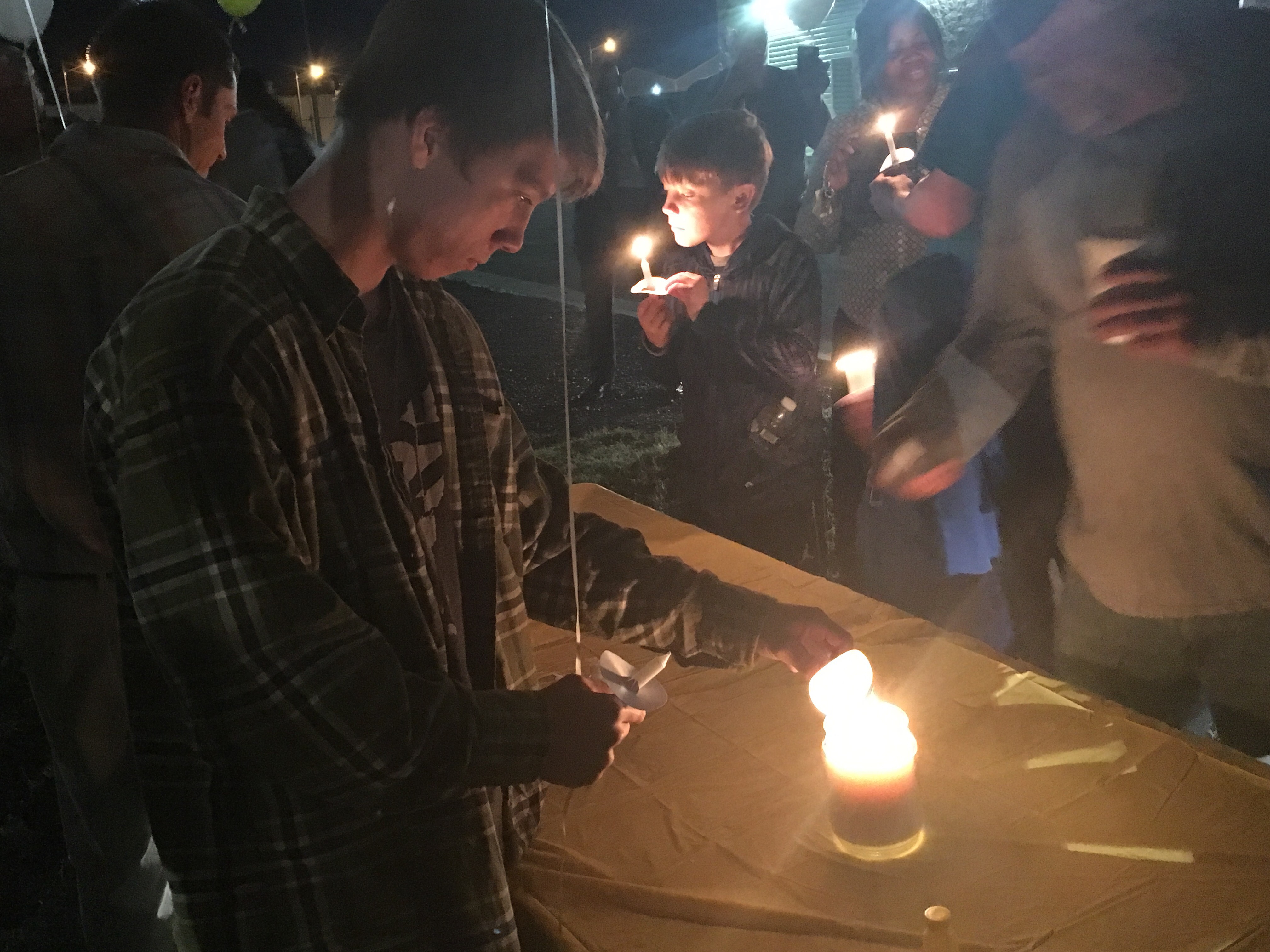 A special candlelight vigil was held Monday night at the Cullman County Sheriff's Office to remember and raise awareness for several missing persons or those with unsolved murders in and around Cullman County. / Nick Griffin

CULLMAN – Dozens of friends, family members and law enforcement officers gathered at the Cullman County Sheriff’s Office Monday evening for a special candlelight vigil to remember and raise awareness for several missing persons or those with unsolved murders in and around Cullman County.

The event, organized by the CUE (Community United Efforts) Center for Missing Persons, was a stop on the nonprofit’s “Road to Remember Tour” that has been traveling the Southeast, raising awareness for missing persons and their families.

CUE was founded in 1994 by Monica Caison. The organization is focused on finding the missing, advocating for their causes and supporting their families.

"The one thing that I have noticed listening to speakers is all these children that are left behind. We just left Atlanta where sisters are now raising the child of their missing sister, Brunswick, Georgia where children were left behind, it just goes on and on and this has really got to stop," Caison said. "We're leaving a lot of kids parentless and I think that’s the one impact that so far on this tour I'm seeing the most. A couple of years ago it was domestic violence, but this year I'm really noticing the kids that are left without parents or a parent. So with that said just pray for these investigators, it encourages your law enforcement and they need to be supported too. I am thankful to all law enforcement because they have one of the most thankless jobs out there."

As part of the gathering before the candlelight vigil took place, Wilson's aunt, Dawn Shoults, spoke to the crowd gathered at the sheriff's office about what the support of her community means to her and what her family is going through.

"We have looked, we have searched all over for her and we're not going to give up. CUE stands for Community United Efforts and that’s what we have to do, communities have to stay together and lift each other up. We're very blessed here in Cullman County. Sheriff Gentry and this department will not give up. I know that not a day goes by that someone in the department isn't thinking about Jordan and that means more to this family than they will ever know," Shoults said. "It's tough to live it every day. When something happens, people are around and they're there with you for the first two weeks and then they're gone, but we live this daily. Minute by minute, hour by hour some days; it's a nightmare that no one wants to know."

Shoults was followed by Wilson's 12-year-old son Dylan Dill, who spoke publicly Monday night for the first time since his mother went missing.

"I'd like to thank my friends for being here for me. They've been here since day one, they know all the stuff that I go through and how hard it is on me and my family. Mom was the best mother you could ask for. You'd come home and get a kiss on the cheek and she'd baby you, I really miss that," Dill said. "I miss coming home every day and having her in my life, now I have to come home and hear my little brother say he misses mom. It's just hard, it's heartbreaking. But family is there for you, it will always be here for you no matter what."

Sheriff Matt Gentry spoke from the podium as well about how important these cases are to himself and the department.

"In every one of these cases there is not a day that goes by that something isn't on our hearts with these cases and that means a lot to us. Bringing peace to families is hard to describe in law enforcement, the ability to bring peace to people is something that we work for every day in law enforcement," Gentry said. "In this line of work, you get to see the best and the worst in every situation, but one of the things that we believe in is grace and compassion. I can guarantee you 100 percent that whether you realize it or not, there is a little hole that’s missing in our hearts. This is our home and one of the things that we believe in is that the sheriff's office doesn’t belong to me, it doesn't belong to the deputies, it belongs to all of us, and so when something happens, it happens to us too. Each and every one of us have nights where we go home and can't sleep because we wonder if we could do more to bring people closure and peace."

After several family members and members of the sheriff's office spoke, the crowd headed outside for the candlelight vigil, where, after lighting the candles, families released balloons into the sky as a way of lifting up their prayers for their missing family members.

The Wilson family announced just before the ceremony that for the next 30 days, a $50,000 reward will be offered for the direct discovery of the location of Jordan Wilson.