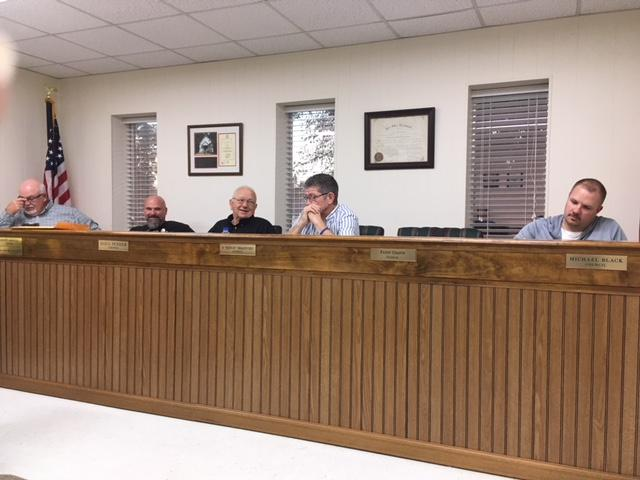 GARDEN CITY – At its meeting Monday evening, the Garden City Town Council voted to extend the town hall schedule from four days per week to five, with the town office to now be open on Fridays.  Mayor Tim Eskew and Councilman Butch Bradford shared that community residents had complained about lack of access to town services on Fridays.

While the office will definitely be open on Fridays, the council debated whether or not town Public Works employees would be required to move from four 10-hour shifts to five eight-hour shifts per week.  Two town employees who were present were opposed to the idea, stating that a fifth work day each week would mean less work getting done per shorter shift, as well as disrupting their established personal and family schedules.  The council put off further discussion until a later time.

Next up, Garden City Volunteer Fire Department Chief Steve Ohls raised a concern about a recent incident in which his department was called out to a wreck on I-65, saying, “I’m basically dead set against having to go out on that interstate.  It’s bad enough here on (Highway) 31.”

When asked if other departments were available, the chief answered that he was informed by the dispatcher that his was the closest available with medical personnel.  Colony’s department was closer to the accident scene, but according to the Ohls, “They won’t call Colony for any medical calls.  Their fire chief does not want none of their people running medical calls, because they had an incident about five, six months ago.”

Mayor Eskew encouraged Ohls to contact the dispatchers and talk about the situation with them.  He did not want to see Garden City’s department simply refuse to assist when called.

Said Eskew, “If nobody can respond, somebody needs to respond.  We need the reputation that we’re going to be there if we’re the only one that can get there.”

He also cautioned that the department should never commit all of its resources to such a call, but should always have enough personnel at home to respond to local emergencies.

The council also discussed three local properties with issues it claims are making them nuisances:

Deb’s Tire – The council said that after numerous discussions between the Town and owners over outside tire storage, and trucks parking on Town property and hindering vision and access to nearby streets, this case will go to court on Nov. 7.

Property of Eric McAnnally – The council reported sending letters to McAnnally about an overgrown and debris-filled yard.  Due to a claimed lack of progress on the resident’s part, council members will begin drawing up paperwork to go to court.

Property of Britney Tytler – The council reported that Tytler has shown significant effort to clean up her property, and the council decided simply to encourage her to continue to carry her efforts to completion.

Lastly, the council also welcomed Good Samaritan Clinic’s Executive Director Jolanda Hutson, who is visiting each municipality in the county in an effort to promote contributions to the nonprofit organization, which provides medical services to the uninsured.  Drastic reductions in annual gifts from two major funding sources have left Good Samaritan $40,000 short this year.