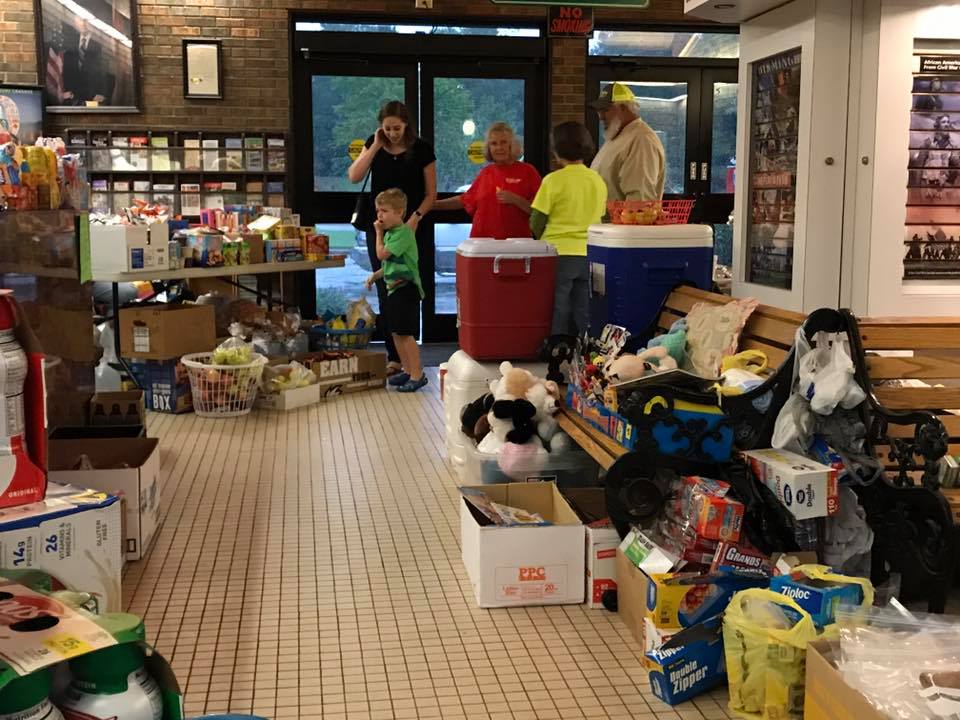 DODGE CITY – It all began late in the afternoon of Saturday, Sept. 9, with a single social media post asking for a little help.  Rhonda Hagemore of the Dodge City Volunteer Fire Department wrote:

“We have had a request from the Rest Area on I-65 between Exit 299 & 304 that there are Evacuees there that have no place to go and are sleeping in their cars. They reported that there was a great need for FOOD & DRINKS. I called the rest area and did verify this information and the need for food.

Jack's Hamburgers at Dodge City is carrying about 60 Hamburgers up there.

I will be carrying food and drinks up there from the Dodge City Fire Dept.

I have had several others to ask how they can help. I'm sure there is a need for other things. Folks this is a golden opportunity for us to help each other out. There is so much hate in this world and it's time we make a change. I would hope that if me or my family were in this situation that someone would be there to help us.

I will be getting stuff to make sandwiches for these people and placing it in coolers for them to eat. If you would like to help me, or donate something, give me a call or a text message and I will coordinate with you.”

Within 20 minutes, before Hagemore had even reached the Governor Guy Hunt Rest Area herself, a church, business and a second local fire department announced that they would help.  That model was the norm for the next few days, as volunteers came out of the woodwork around Cullman County and other parts of north Alabama.

On Saturday night, numerous evacuating families were enjoying hot meals and getting supplies at the rest area, and were lodged at area hotels, churches and homes.  By Sunday afternoon, volunteers had amassed so many supplies, they were shipping out trailer loads to other sites around the county where evacuees were staying.  A steady stream of donors rolled into the rest area with bags of food, cases of water and sodas, and other supplies.

Mt. Joy Baptist Church housed 19 families from the rest area Saturday night, and on Sunday afternoon church volunteer Sherell Barnett was back at the center, picking up a trailer-full of supplies and looking for more families to help.  His last statement to The Tribune before pulling out seemed to sum up the attitude of so many churches and church members there: “If anybody needs a place, just send them on that way.  If we run out of room at that church, we’ll just move to another one!”

The visitor center at the rest area was transformed into a free one-stop department store for evacuees.  Volunteers from local churches and businesses organized donations and manned tables to pass them out.  Goods were distributed to stations around the building: groceries, snacks, hot foods and drinks, clothing, baby goods, children’s toys and activities, toiletries and personal items, and even a medication table set up behind former nurse Hagemore’s seat.

When an Alabama Department of Transportation (ALDOT) staffer suggested on Sunday that the volunteers should move out because vending machine owners would be upset that people were giving away food and drinks around their machines, Hagemore suggested that the vendors should come to the rest area and open their machines to help the evacuees.

On Monday, the worst of the weather blew through, and traffic slacked off at the rest area as evacuees hunkered down wherever they were.

On Tuesday, traffic was back up to weekend amounts, but was headed the other way.  Volunteers continued loading up evacuees with supplies, as before, but their customers were going home.  The need was no less: evacuees had exhausted supplies they brought with them or picked up on the way, and were going back to areas where availability of supplies was questionable.  Some travelers, who had the longest journeys ahead into areas where curfews were in effect, chose to stop for the night in Cullman.  Feeding and lodging seemed ready to continue unabated.

Then on Tuesday afternoon, ALDOT contacted Hagemore once more, telling her again that it was time to go.  ALDOT District Administrator Daniel Sparkman and Paul White came to the rest area personally, with stated concerns about tables and stacks of goods creating safety hazards and blocking access to bathrooms.  Hagemore and other volunteers reported that they were ordered to leave immediately; when it became evident that they would not be able to get everything out of the center quickly, the administrator allowed them to remain until 9 a.m. Wednesday.

Afterward, numerous local residents took to social media to express support for Hagemore and the others, and anger toward the state agency.  Following are a few examples:

“You did the right thing when it needed to be done.  We support you!”

“Thanks for all of your HARD work and all the volunteers that helped also. Godspeed!”

“Proud of you and your volunteers. When your first post came on FB, I knew you would and could take care of the situation.”

“I'm with you. This is crazy. All it boils down to, is these people cannot stand not getting the attention.  They don't want to help, but they sure want to run there mouth. They need to stand up or sit down and keep their mouth closed.”

“I am just appalled at what they are insinuating!  They should be proud of what this community has done for the evacuees!”

“You were doing a good deed and working super hard to comfort people.  I think everyone in the community will have your back.”

“Not sure I exactly know who is accusing who for what….but know that a lot of people including Rhonda were doing what they could to alleviate a bad situation.”

“You did a great job, which is something the ALDOT knows nothing about. They only cause problems!”

“You hang tough gal. I know you will. Just amazes me how some folks think they can treat others this way. I for one appreciate all y'all have done, and I know those that were in need really appreciated everything and everyone as well.”

“ALDOT, you need to remember who pays your salary: the citizens of Alabama.  May need to do some more swamp draining???”

“I understand that you never wanted recognition, but everyone coming together to help out those in need knows what y'all have done was a blessing to those that needed help.  The great father above sees all and know that everything will come out in the open in all due time. Keep pushing forward and thank our father for giving you and this community the assignment he led y'all to do.  Everyone that y'all helped was very grateful and it showed.”

“It was an outpouring of love and compassion from many people to help all people!!! It was just amazing!”

“Is someone SERIOUSLY trying to stop these efforts?? SERIOUSLY?  There is absolutely NO excuse and what a slap in the face to the hard working and caring people of the company those negative nancies claim to represent.  There are no words for that atrocity.”

“I know how hard everyone worked to help those displaced by Irma. These evacuates were so grateful to have people care about them and show them Christ's love for them. Shame on ALDOT for shutting it down!!”

While having no kind words for the upper-level ALDOT staffers who came to the rest area, Hagemore and her volunteers commended the rest stop facility staff.  Volunteer Katie Murphree Loyd posted on social media, “They have been wonderful.  So kind and helpful.  We thank all of you. If you had not brought it to the attention of others we may not have known about the needs.  You have helped us carry the heavy stuff out to our neighbors and worked so hard to keep it clean with all the goodness going on.  You have all been wonderful to us and our neighbors.  May each and everyone one you receive blessings.  I feel like I have known some of you for years.  Your employer should be very proud of all of you.  THANK YOU.”

After relief workers packed up and left the rest area, they moved their operation into Dodge City and continued to take donations.  With the donated use of a warehouse and J.R. Smith Trucking vehicles, volunteers loaded supplies onto pallets to be shipped to Impact Church in Jacksonville, Florida, where they will be distributed to storm victims in that area.  One truck left Friday, and another is scheduled to go on Sunday.

An exhaustive list of donors, supporters and hand-lenders was not immediately available, but the following businesses and organizations were identified. Hagemore said that she maintained a detailed list that includes individual volunteers as well, and will release that information soon.  The Tribune will make her list public when it is available.  For now, even the partial listing shows how the community reacted to this disaster.  The list includes volunteers and donors who gave anything from a hot meal to free lodging for multiple families.

Identifying and crediting every person, group and organization that helped is likely an impossible task, but Hagemore offered her thanks to all:

“Just know we could not have done this without you, no matter the job you did: whether offering shelter for people or sending supplies, or being there to help coordinate.  I am weak but together we are strong!”

Photo courtesy of Rhonda Hagemore on Facebook. Posted on Sept. 11, 2017

Note: This article focuses on hurricane relief activities centered at the Gov. Guy Hunt Rest Area on I-65 between Saturday, Sept. 9 and Wednesday, Sept. 13.  Many other groups were involved in relief projects of their own (For examples, see www.cullmantribune.com/articles/2017/09/11/group-florida-evacuees-making-camp-liberty-home and www.cullmantribune.com/articles/2017/09/12/6-cullman-men-among-200-those-sent-help-restore-power-florida), and The Tribune hopes to recognize them as well.