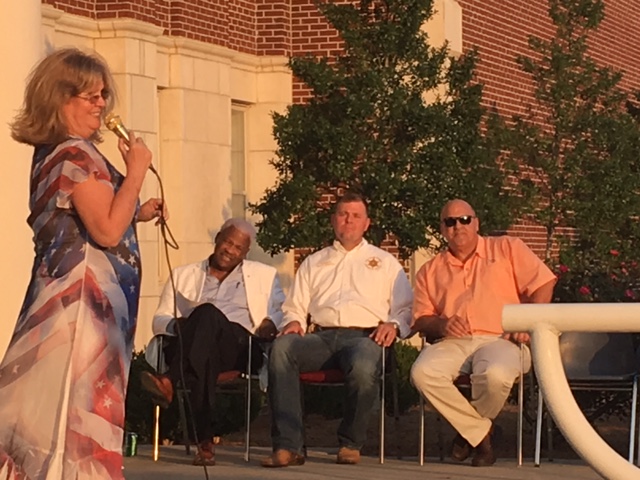 CULLMAN – On Sunday evening, friends and family gathered at the Cullman County Courthouse for the fourth annual Families First rally, to remember the life of Jerry “Jay” Kendall, who died May 21, 2014 and to promote safe driving Kendall was riding his motorcycle on Highway 31 in Cullman when he was struck and killed by a distracted teen driver.

Local riders made a procession up Hwy. 31 from Hanceville past the place of Kendall’s death near Williams Barbecue, until they reached and circled the courthouse.  There they joined Kendall’s family and friends, along with local dignitaries and other attendees, to celebrate Kendall and call for drivers to exercise safe practices behind the wheel.

Event coordinator Josh Speakman shared, “This is an event for ‘Hands on the Wheel;’ it’s a foundation that Suzette Kendall started when her husband got killed by a distracted driver–a young teen hit him on his motorcycle on Hwy 31.  It’s a nonprofit she started to raise awareness and kind of get the laws a little harsher for distracted driving, texting and driving.  I knew Jay real well, and so I just kind of help her with this event every year to promote her organization.

County Commissioner Garry Marchman added, “It’s a worthy cause, just to bring attention to being careful about using our cell phones when we drive; and to give a little recognition to people in our community to people who have suffered losses because of this, and I think it’s a good thing.”

Lummie Speakman addressed the young people in the crowd about how quickly a distraction can produce a tragedy on the road.  Marchman told listeners that “what goes around, comes around,” and explained that behavior behind the wheel is a reflection of a person’s overall character.  Gentry, after a long and difficult week at the sheriff’s office, encouraged people to “make the good outweigh the bad;’ and said that events like the rally give him hope, because they have the potential to make things better than before.  Lindsey Jones, a cancer survivor who lost her eyesight to the disease, sang and talked about how the obstacles caused by her condition have made her a stronger person.  Fields delivered a short but rousing sermon based on the biblical story of Jacob, saying that people often do not understand God’s blessings until they have encountered struggles and hardships.

Suzette Kendall, widow of Jay Kendall and head of Hands on the Wheel, spoke about the dangers of smart phones, and their potential to distract.

“There’s a lot of times I sit back, and I hear more and more accidents on texting and driving, and I even read an article that even the sheriffs and the cops are putting their hands up like, ‘What do we do? There’s way too many of these.’

“And you never think it can happen to you.  I never dreamed in a million years that, that morning on May 21, 2014, when I passed that wreck that my husband was in, my son and I got detoured.  We thought something happened at Williams Barbecue, because that’s where it was at. When we turned around and came back through town, my son said, ‘Must have been a bad one; they have somebody in the road, covered up.’  Little did I know that was my husband.

“I never got a chance to say goodbye, because we take so many things for granted.  That morning I figured, ‘He’s asleep, I’ll see him when I get home.  I’ll call him later.’  Sometimes you don’t get that chance.  Don’t take it for granted; always tell each other before you leave you love each other.  Say goodbye, because I thought I would have so many goodbyes and hellos.”

The rally included a balloon release, including 72 balloons, one for each birthday Kendall would have celebrated if he was still alive. After the sun went down, the evening concluded with a candlelight vigil.

According to Drive Safe Alabama, the following activities can all cause distraction for a driver:

One in four teen drivers will respond to a text message at least once every time they drive, despite such behavior making them 23 times more likely to get in an accident.

According to a recent University of Alabama study, deaths from automobile accidents in 2016 were more than 24 percent higher than in 2015.  Distracted drivers, as well as distracted pedestrians, were listed among the major causes.  Nationwide, distraction-related accidents increased by 20 percent from 2014 to 2016.

Visit Suzette Kendall’s organization, Hands on the Wheel, at http://qrne.ws/hotw.