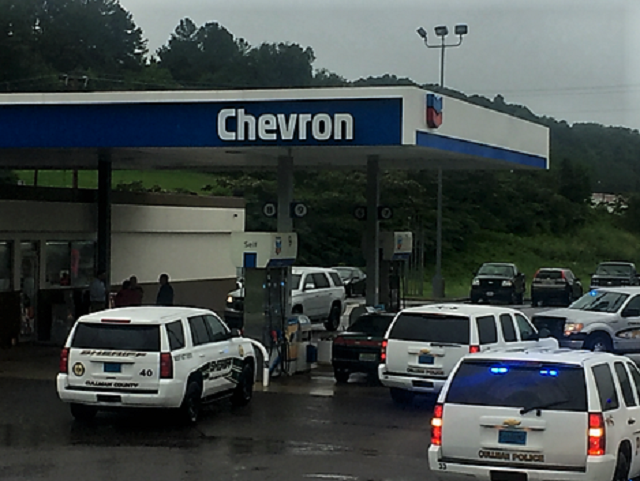 Cullman police responded to a reported attempted robbery this morning at the Chevron on U.S. 278 near I-65. / Rod Wynn

CULLMAN – Mental illness is suspected to have been the cause of an incident this morning at the Chevron on U.S. Highway 278 near Interstate 65, when a man entered the station and casually told the female clerk on duty to give him all the money from her register. No charges were filed.

"She (the clerk) didn't do it," said Cullman City Police Chief Kenny Culpepper. "She didn't comply, but he just kept standing there. He didn't have a weapon. Eventually, he walked out, telling her to turn on the gas pump so he could get gas. Then he was standing around acting like he was getting gas."

Sgt. Chris Nichols, who responded to the scene along with Officer Roy Bates, said the clerk and her male coworker could tell something wasn't right with the man. "They told him to go on out and they would turn on the pump. When he went outside, that's when they called 911."

The man has been identified by police as Mickey Clay Waldrep, 32, of Jones Chapel.

"It was pretty obvious to the officers that the suspect had serious mental issues going on," shared Culpepper.

Nichols and Bates took Waldrep into custody. An emergency probate order was obtained and Waldrep was transported to Cullman Regional for an evaluation.

"When I arrived he was at the gas pump," said Nichols. "I told him to get on the ground and all that. He offered no resistance whatsoever."