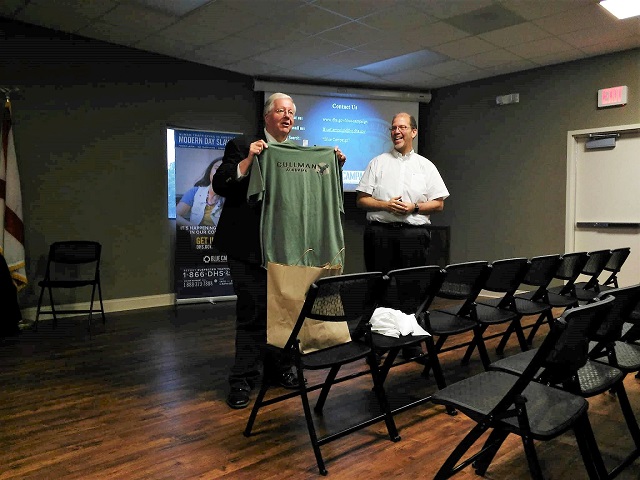 Judge Kim Chaney, left, presents Scott Santoro with the Department of Homeland Security a few tokens of appreciation for his work this week in Cullman County. / Andrew Cryer

CULLMAN – This week, the Cullman County Human Trafficking Task Force, in conjunction with the U.S. Department of Homeland Security’s Blue Campaign, held human trafficking detection and investigation training sessions. Two were offered for law enforcement from Cullman, Alabama and even outside the state. On Thursday evening, a public course was offered for citizens interested in learning more about human trafficking.

The public training class touched on ways to protect citizens’ families and communities from human trafficking activities. The class was led by Scott Santoro with the Department of Homeland Security. According to Cullman County Human Trafficking Task Force Chairperson Kathy Wilson, “He is the trainer that does all the training for the department nationwide. We were able to secure his training by funding made possible by (Cullman County) District Attorney Wilson Blaylock and Judge Kim Chaney. Cullman Savings Bank also made a donation, along with Cullman County Sheriff Matt Gentry.” The public event was the final class offered by Santoro after training 60 law enforcement officers during the week.

Santoro began Thursday evening by defining what human trafficking means. He said, “The crime of human trafficking, simply put, is really about the issue of compelling another individual to work for little or no wages, provide services or commit an act of commercial sex.”

Citizen training is especially important in preventing and stopping human trafficking, said Santoro. “At the end of the day, the majority of the tips that we’re getting on human trafficking are not coming from law enforcement.  They’re coming from you all. We have to realize the value that we all have.” By show of hands, out of the room full of attendees, three had previous experience in learning how to spot the signs of human trafficking.

After explaining the importance of citizen awareness, Santoro showed members of the community videos of dramatizations of real cases. The videos used can be found on YouTube when searching, “FLTEC,” on the Federal Law Enforcement Training Centers channel, or by googling “Blue Campaign.”

In concluding the training, Judge Kim Chaney presented Santoro with items of appreciation from the Cullman community.

Concluded Santoro, “This week has been so enjoyable. I wish that all of my classes were like this; I really appreciate all of you coming out. I don’t get to do this with the community very much. I can tell y’all that you’ve been more enjoyable, and laughed more at my jokes, than four days of law enforcement.”

The U.S. Department of Homeland Security defines human trafficking as “a form of modern-day slavery, and involves the use of force, fraud, or coercion to exploit human beings for some type of labor or commercial sex purpose. Every year, millions of men, women, and children worldwide—including in the United States—are victims of human trafficking. Victims are often lured with false promises of well-paying jobs or are manipulated by people they trust, but instead are forced or coerced into prostitution, domestic servitude, farm or factory labor, or other types of forced labor.”